No. 6 Arizona puts an end to the Buff’s win streak 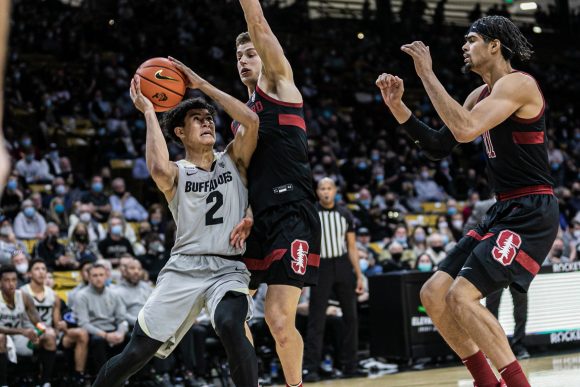 Freshman guard K.J. Simpson (2) shoots the ball during the second half at the CU Events against Stanford. Nov. 28, 2021. (Io Hartman/CU Independent)

The Colorado Buffaloes Men’s Basketball team dropped their five-game winning streak with a 55-76 loss at No. 6 Arizona on Thursday night. The Buffs now sit at 11-4 overall and 3-2 in Pac-12 play.

Head coach Tad Boyle and the Buffaloes have an unsuccessful record against the Wildcats, specifically in Tucson. Colorado has not won a game at Arizona’s home arena since 1965 and own an all-time record of 15-22 against Arizona.

Colorado had a slow start, but began to turn up the heat as the game progressed. After trailing by as much as 15 points in the first half, the Buffaloes entered the second half down by just four points. Arizona exploded in the second half to break away and capture the win.

Freshman guard K.J. Simpson was the bright spot for the Buffs in the loss. Simpson had 17 points, three steals and four assists and helped aid Colorado to the slight deficit at the half. Simpson signed to play at Arizona prior to their coaching change early last year before he committed to Boyle and the Buffs in April.

“I was really proud of our guys’ fight in the first half,” Boyle said. “Once we settled in, our guys fought back. But in the second half, I did an awful job of coaching. We gave up too many layups and we got selfish on offense. That’s my fault.”

Despite the struggles against the Wildcats, the Buffaloes are determined to leave Arizona with at least one victory.

“It’s disappointing, but we don’t have any time to feel sorry for ourselves,” said Boyle. “We have to get up tomorrow, put together a game plan for Arizona State and get ready to strap it on Saturday night in Tempe. We have to salvage a split on this road trip. That’s the goal.”

Colorado is headed to Tempe to tip-off at Arizona State Saturday, January 15th, at 8 PM MST.