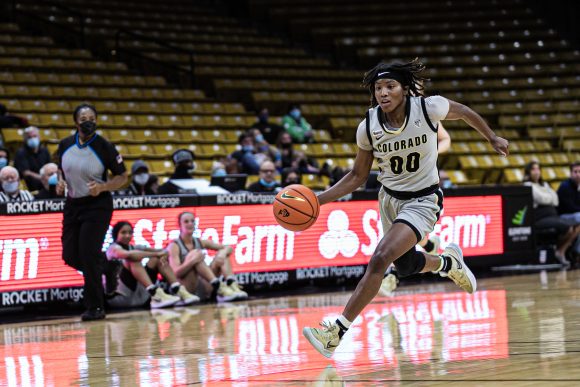 Junior guard Jaylyn Sherrod (00) takes the ball up the court during the game against Dixie State. Dec. 3, 2021. (Io Hartman/CU Independent)

For the first time in two weeks, the University of Colorado women’s basketball (12-0, 1-0 in Pac-12) team returned to the hardwood to host the University of Southern California (7-4, 0-1) in their Pac-12 conference opener. The Buffs battled through a challenging first half and rode a solid second half to a 71-58 win over USC. The Buffs have now rattled off 12 straight wins to the start of the season and are one of just two women’s basketball teams in the country that remain undefeated.

“I wasn’t really sure what tonight’s game was going look like,” said head coach JR Payne. “Both teams had not played in a while. This is the longest break we have had in between games since 1979, so that is a very long time. But I am unbelievably proud of my ball club. We were tough, we were resilient, we pushed through.”

Coming off the extended break, the Buffs knew it might take some time to find their rhythm. Luckily for Colorado, a quick five points from junior guard Jaylyn Sherrod gave the Buffs an early 10-point lead with two minutes to go in the first quarter.

The Trojans refused to go away quietly despite the early deficit and forced Colorado to work hard for baskets around the rim. It was a fight that the Buffs lost in the first half as the Trojans combined to block an impressive eight shots in the first two quarters. That effort kept USC in the game as they exchanged baskets and even went on a few scoring runs. CU maintained their composure, though, and still carried a five-point lead into halftime.

The five-point lead was one of CU’s slimmest halftime leads of the season, and they responded in full force to start the second half. The Buffs emerged from the locker room and immediately rattled off a handful of baskets, including two big three-pointers from sophomore sharpshooter Frida Formann to expand the lead to 12. It was a standout night for Formann as she scored a season-high 15 points in addition to three assists.

“Today I just needed to do whatever I needed to do to help my team,” said Formann. “It was nice to make some shots, and to be able to cash in some of those opportunities that I get every game.”

The Buffs would go on to stretch that increased their lead to 17 midway through the 3rd quarter before USC mounted a small comeback to slice the lead in half to eight points to end the quarter. It was the smallest the lead got for the remainder of the game.

“I know at the start of the 4th quarter, I looked at everybody, and I said there are only ten minutes left,” said Sherrod. “We just got to give our all for ten minutes, I understand that we are shorthanded, but it doesn’t matter. We came too far in this game to give it away now.

Those words clearly resonated with the team and senior forward Mya Hollingshed, who scored seven of her team-leading 18 points in the final quarter as she helped secure the 13-point win for Colorado.

CU remains one of the two undefeated teams in the country along with the Arizona Wildcats. The Buffs will look to continue their dominating early-season run as they host UCLA this Sunday at the CU Events Center at 11 a.m MT.