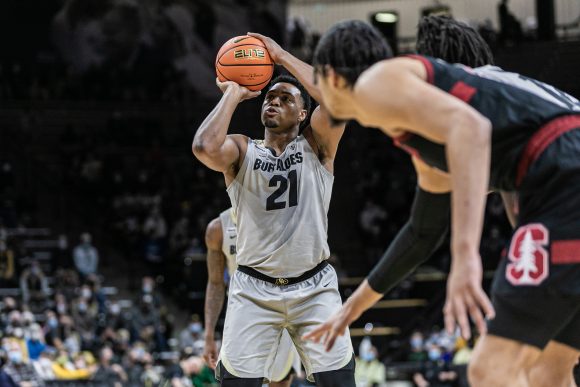 The Colorado Men’s Basketball team held out against the Washington State Cougars for their second Pac-12 victory, 19 days after their last game against CSU Bakersfield on December 18.

The last three scheduled matchups for the Buffs were canceled, including games against both No. 7 Kansas. The other two contests at Oregon and Oregon State are slated to be rescheduled.

Standout freshman guard K.J. Simpson was injured in the first half, which allowed freshman guard Julian Hammond III to get some valuable experience on the floor.

Thursday night’s game came just one week after the devastating Marshall Fire in Boulder County, affecting multiple areas just minutes outside of Boulder. Boyle and his staff decided to use the game as an opportunity to raise money for the victims of the tragedy. Fans were encouraged to donate money or gift cards during the matchup.

“We understand there are things that are bigger than basketball – our players understand that,” said Boyle. “Our hearts go out to those victims because it’s going to be a long road to recovery and we know that. We have to continue to help and support in any way we can do that and tonight was a good first step in that direction.”

The Buffaloes are scheduled to host Washington at 3 PM MST this upcoming Sunday.