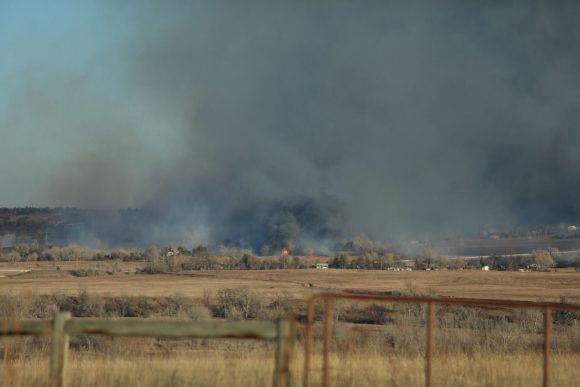 Smoke and flames from one of the fires that started on Thursday. Dec. 30, 2021. (Io Hartman/CU Independent)

At 11:17 a.m. on Thursday, the Boulder Office of Emergency Management tweeted that “the Boulder Emergency Operations Center (EOC) has been activated to respond to multiple wildland fires in Boulder County.”

Fires burning near Marshall Road and Middle Fork Road, likely caused by extremely high winds throughout the day, prompted the Office of Emergency Management to issue evacuation orders to residents in danger.

The office announced that it had opened two evacuation centers at the South Boulder Rec Center at 1360 Gillaspie Drive and the Longmont Senior Center at 910 Longs Peak Ave.

The South Boulder Rec Center site was closed shortly after it was opened after the building lost power. Additional evacuation sites are available at the Lafayette YMCA, North Boulder Recreation Center and the 1st Bank Center in Broomfield.

A large animal evacuation center is also open at the Boulder County Fairgrounds.

In an Instagram post, the CU Boulder Police Department said there was a large grass fire near the university’s South Campus. The message said that emergency personnel are responding to the blaze and to “stay away.”

Lousiville and Superior, two cities neighboring Boulder are under mandatory evacuation orders. The cities have a combined population of over 30,000 people.

Some residents in Broomfield and Westminster, further southeast from Boulder, were also ordered to evacuate later in the evening of the 30th.

Earlier in the day, a CU Spokesperson said that the university had heard several reporters of knocked down trees due to the wind. No active fires are impacting the university’s main campus as of 9:00 P.M.

Later in the evening, at 5 p.m., officials from Boulder County, the City of Louisville and Governor Jared Polis held a press conference on the state of the fires. Officials estimated more than 500 homes were lost since the start of the two major fires.

At the time of the press conference, Boulder County Sheriff Joe Pelle said that they had not heard of any missing person reports or deaths, but said the severity of the fires meant he would “not be surprised” if there were reports of either further down the line.

The high winds that caused the fires also lead to power outages throughout Boulder, which had yet to be entirely resolved by the evening of the 30th.

Chancellor Philip DiStefano, in a message to the university community, said that CU Boulder would “review possible spring term operational changes in order to support our campus community.”

DiStefano also outlined several resources that the university has provided for those who might need additional support.

“We understand that for many of you, there will be a long recovery from this traumatic event, and our university and campus community will support you in every way that we can,” he said.