Colorado Buffaloes football closes its season with a trip to Utah 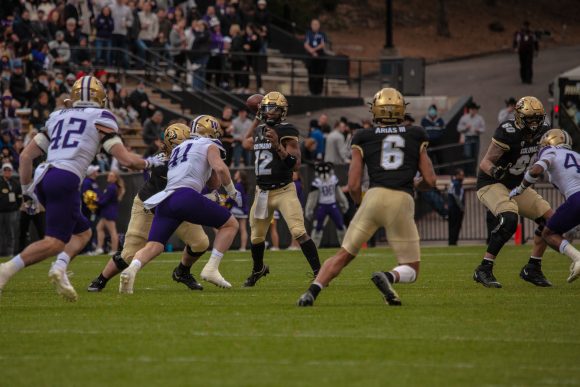 The Colorado Buffaloes will head to Salt Lake City to conclude the 2021 season on Friday, Nov. 26. Colorado sits at 4-7 overall, and a 3-5 conference record and will look to play spoiler against the 16th ranked Utah Utes. At 8-3 (7-1 Pac-12), Utah is seeking a solid finish to their regular season before preparing for the Pac-12 title game.

The Buffs’ season has certainly not gone as expected, but the past couple of games have shown an improved Colorado squad. Freshman quarterback Brendon Lewis has settled in, and the run game has led to some late-season life. With a chance to beat a very good Utah team, Colorado will have nothing to lose on the road.

The key to this game will be how Colorado’s offense, which has been inconsistent at best all season, can find a way to score on this incredibly talented and deep Utah defense. Last week, Utah dominated then ranked No. 3 Oregon 38-7, as the defense dominated the high-powered Ducks.

“Defensively, they’re playing as good as they played all season,” said head coach Karl Dorrell. “They’re very stingy on that side of the ball, and they’re playing with confidence. It’s a great system on defense.”

For the Buffs, the offense struggled against a reeling Washington team but found a way to pull it out thanks to clutch defense and late-game heroics by Lewis. CU’s offense must have playmakers step up due to injuries at the wide receiver Brenden Rice who will miss the Utah game. Specifically, Dorrell mentioned freshmen receivers Ty Robinson, Chris Carpenter, and Chase Penry as candidates to step up.

“They’re going to play bigger roles,” said Dorrell on Monday. “Montana (Lemonious-Craig) went out two weeks ago, and now Brendan’s (Rice) out. Chris Carpenter had a big third-down catch that was really critical and part of that 90 play that 90-yard drive, and it was good to get his confidence going. He’s going to play with Chase (Penry) and Ty (Robinson). We still have a very capable group and a very confident group. We just have to put them in positions to make plays.”

The Utah offense versus the Colorado defense will be the deciding factor in this one. Colorado’s defense has been solid all year, and with the chance for senior linebacker Nate Landman to return for his final game, the defense will be hungry for a huge game.

“Utah is a good team,” center Colby Pursell said. “They’re a very good measuring tool. If we can beat Utah, we know where we’re at now.”

The game will kick off at noon MST on FOX at Rice-Eccles Stadium in Salt Lake City, Utah.