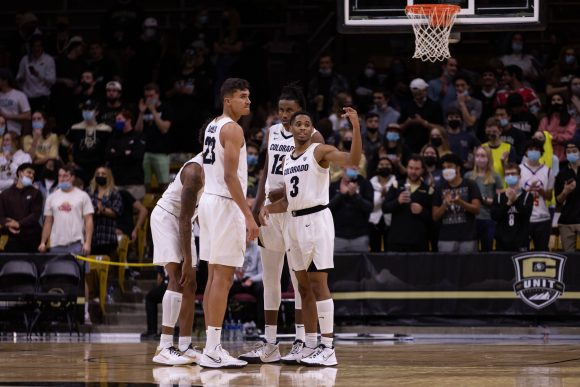 The Buffaloes gather in the middle of the court at the beginning of the second half at the CU Events Center. Nov. 15, 2021. (Kara Wagenknecht/CU Independent)

Playing three games in four days is a tough ask for any team, especially a young and inexperienced team like the University of Colorado Buffaloes. After arriving in the US Virgin Islands on Wednesday, the Buffs spent a day exploring the area before beginning their three-game sprint at the Paradise Jam.

Colorado’s first opponent, Southern Illinois, gave them a competitive game to open up the tournament on Friday night. The Buffs lost to the Salukis 67-63 after letting them back into the game. After opening the game on a 12-1 run, the Buffs could only score six more points the rest of the half, and Southern Illinois went into the locker room with a 27-19 advantage. A big reason for the Salukis’ ability to come back was their 3-point shooting, knocking down five in the first half.

“That was the key to the game,” Colorado head coach Tad Boyle said. “When I look at our defensive keys…the second most important thing to beat Southern Illinois is to defend the three. We didn’t do that. We did not execute defensively like we’re capable. We shot 50 percent from the field. That’s good enough to win a game, but it wasn’t good enough tonight.”

Led by sophomore forward Jabari Walker’s 16 points and four other Buffs in double figures, the offense was not holding them from a win. The defense lacked on Friday night against Southern Illinois, not matching Colorado’s standard for themselves. The Salukis took advantage and drained 12 three-pointers en route to their win.

“We’re not happy whatsoever with the way we played defensively,” Boyle said. “But I am happy with our competitive grit and toughness. It was on exhibit again tonight. We just have to play smarter, and we have to finish better.”

Colorado played another game on Saturday with the demanding tournament schedule, facing off against the Duquesne Dukes. The Buffs were met with another highly competitive game but ended up on the other end of the stick, beating the Dukes 84-76 in overtime.

After Duquesne’s forward, Tre Williams hit a three with 21 seconds left, da Silva answered with a three of his own with only 2 seconds left in regulation. The Buffs’ would ride this momentum into the extra period scoring the first 5 points and giving them their first lead of the game.

Senior forward Evan Battey led CU in scoring with 18 points. Walker again had a big game with 13 points and a career-high 13 rebounds. Through five games, the Buffaloes have only once been able to relax down the stretch. Boyle believes this will likely be a common theme going forward.

“This is a team, and I feel it now, five games in, that we’re going to have a lot of games like this,” said Boyle after beating Duquesne. “I just don’t know if we have the consistency to put teams away. Maine we did, but Montana State we didn’t, New Mexico we didn’t, Southern Illinois we didn’t, and we didn’t tonight – and we were fortunate to get to overtime in two of those games.”

The Buffs showed their grit and fought hard once again, rallying from a 60-49 deficit at the under-8 timeout to force overtime and eventually pull away in overtime.

Once again, Colorado’s fate would not be decided until the bitter end, ultimately beating Brown for fourth place in the Paradise Jam 54-52 on Monday.

Colorado had a one-point lead with 55.7 seconds left before a floater from sophomore guard Keeshawn Barthelemy would give the Buffs 53-51 lead which proved to be the winning basket. In a low-scoring affair where the half-time score was 30-24, and both teams failed to score more than 60, the Buffaloes once again needed a gutsy performance to pull out a win.

It was Jabari Walker’s show in the Virgin Islands as he backed up his strong first two games with another double-double. Battey also had a strong tournament scoring 18 against Duquesne and then another 16 versus Brown.

The Buffaloes’ stifling defense was on full display in the second half as the Bears could only muster 22 points, including two Walker blocks.

“I thought we did a really good job, especially in the second half, of knowing who are shooters and who are drivers,” Boyle said. “Knowing the scouting report, the guys did an excellent job of that. We held them to four threes. Our defense took a step in the right direction.”

After dropping the opening game of the Paradise Jam to Southern Illinois, Colorado played two highly competitive games and was able to pull off two wins. The several nail-bitter games the Buffaloes have had this season provide a young team with excellent experience grinding out wins.

Colorado will be back in action against the Stanford Cardinal to open up conference play on Sunday, Nov. 28 at 4 p.m. MT in Boulder after a break for Thanksgiving.