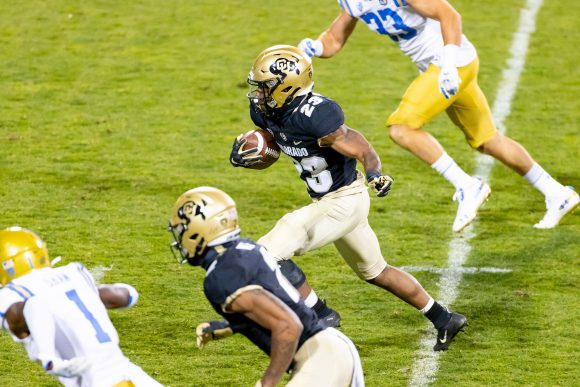 Sophomore tailback Jarek Broussard runs the ball down the field and through a sea of Bruins. Nov. 7, 2020 (Casey Paul CU Independent)

The Colorado Buffaloes lost another Pac-12 conference game, losing to the UCLA Bruins at the Rose Bowl Stadium 44-20. In the first half of the game, the team looked like what head coach Karl Dorrell had hoped the team would look like earlier this season. But the UCLA Bruins came into the second half of the game looking for revenge, scoring 34 unanswered points after the Buffaloes had entered the third quarter leading 20-10.

Dorrell discussed how Colorado had the opportunity to add a win but could not get the job done.

Initially, the Buffaloes looked good as Dorrell used the running game to threaten his former team. Sophomore tailback Jarek Broussard had 108 total rushing yards, 102 of which came in the first half, including a monster 46-yard run in the second quarter. Junior tailback Alex Fontenot was able to find the end zone for his second time in the game after Broussard’s big 46-yard gain. Dorrell noted how the ground game was effective at the start of the game.

“We got a run game established, and we hit a few things in the passing game, and it was good to churn out some points and get some drives going,” Dorrell said. “We were handling their offense fairly well in the first half. We had control of their run game.”

Freshman quarterback Brendon Lewis completed 17 of 26 pass attempts for 158 yards for no touchdowns, but Lewis was able to find his tight end early and often against UCLA. Senior tight end Brady Russell lead the receiving group with 60 yards on five receptions. Russell explained the discrepancy between the two halves.

“It was really unexpected, that’s what’s most frustrating about it,” Russell said. “I don’t think they elevated their game that much; I felt like we brought our level down after playing so well. It wasn’t that guys weren’t fighting or anything.  It was weird.”

After holding the Bruins to just ten points in the first half, Colorado’s defense looked as good as they did in week two against Texas A&M, where they only allowed ten points all game. During UCLA’s second-half scoring surge, the Buffs’ defense allowed four rushing touchdowns and an 82-yard punt return taken back for a touchdown by wide receiver Kyle Phillips. Dorrell mentioned how UCLA’s final field goal of the first half should not be held responsible for the momentum shift in the second half.

“It was a big drive, but I felt we still had momentum,” Dorrell said. “We went into halftime feeling good, but they came out and did what they needed to do.”

The Colorado Buffaloes will face the University of Washington on Nov. 20 for Folsom Field’s final home game of the 2021 season at 1 p.m. MST.