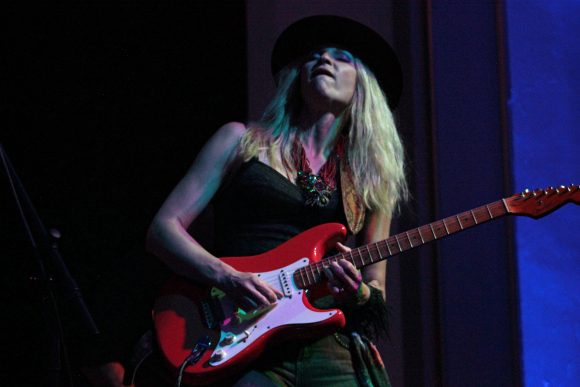 Blues guitarist and singer Ana Popovic can shred — no doubt. On her candy apple red Fender Stratocaster, she executes intricate passages with ease, her fingers flying across the fretboard, her pick a blur. Yet, no matter the speed, she appears calm, almost meditative, immersed in the musical flow.

At the Dickens Opera House in Longmont on Friday, Nov. 5, she held the audience spellbound with her talent and charm, as they sat at elegant wooden tables beneath shimmering chandeliers, sipping pricey wine and nodding gently along to the beat. The set, which mostly came from her live album “Live for Live,” recorded during the 2019 Festival de Guitares d’Issoudun in France, showcased her versatility and virtuosity as a guitarist from her signature blues-rock shredding to funky soulful grooves to laid-back jazzy blues.

Popovic, born in Serbia in the 1970s, began playing blues guitar as a teenager. In 1995, while studying graphic design in college, she founded the blues band Hush. Then, a few years later, she launched her solo career while studying jazz guitar in the Netherlands. Since then, over the past 20 years, she has released twelve albums and two DVDs to critical acclaim, receiving the prestigious French award “Jazz a Juan-Revelation” and seven Blues Awards nominations. She has performed on six all-star Experience Hendrix tours, initially as the only female guitarist.

Popovic’s stage presence is quietly magnetic. With bleach blonde hair, a scarlet hat, a spaghetti strap tank and pink stilettos, she cut a striking figure. Yet, her movements were often understated, and she rarely spoke between songs or interacted with the audience, instead letting the music speak for itself. 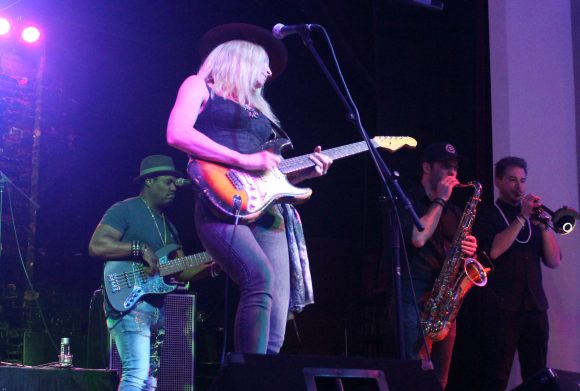 During the set, the songs flowed together, creating a continuous groove. The musical dialogue between band members felt effortlessly fluent, especially for the bassist and keyboardist who regularly exchanged grins and bopped along in sync.

However, the balance between the vocals and the instruments was not optimal. Hidden amidst the dense wall of sound, Popovic’s powerful voice sounded thinner and less emotive than on recordings. Yet, she still managed to hold her own.

Early on, the band brought the energy up with “Love You Tonight” from “Trilogy, Vol. 1,” released in 2016, which opens with a funk horn hook and Popovic’s soulful belt, later building to a climax with lively saxophone and guitar solos. Though most of the audience stayed seated, in the front left corner, four white-haired women began to get their groove on, led in turn by a vivacious elderly man.

After a few more upbeat songs came the moody “Johnnie Ray,” where Popovic confesses to being heartbroken over a former lover, who is now married with a child. Regretful and desperate, she begs for “one last chance,” crooning over a toned-down bluesy dialogue between the keyboard and guitar.

This was followed by a brilliant cover of “Can’t You See What You’re Doing to Me” by Albert King, one of Popovic’s self-proclaimed guitar heroes, featuring grungier belted vocals and a brighter, crunchier guitar tone than King’s original from 1970.

The shredding in this was almost unparalleled, until the final showstopper “Tribe,” a 10-minute song filled with extravagant solos from the whole band, especially Popovic, building to a crisp, dramatic ending. As the audience launched to their feet for a standing ovation, Popovic and her band soaked in the post-performance high, tired and triumphant.