Penalties and defensive woes prevent an upset win against Oregon 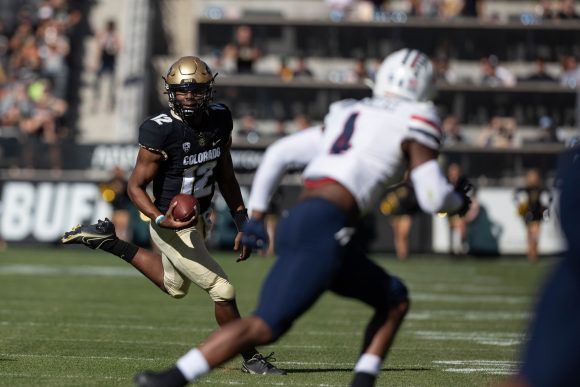 Freshman quarterback Brendon Lewis looks for an open teammate in the endzone during the second quarter. Oct. 16, 2021. (Kara Wagenknecht/CU Independent)

The Colorado Buffaloes unsurprisingly fell short of a win against the Oregon Ducks on Saturday, Oct. 30, to a score of 52-29. Freshman quarterback Brendon Lewis arguably had the best game of his career, as Colorado’s offense scored four touchdowns in the loss. Head coach Karl Dorrell notes how the offensive and defensive improvements that the team made in practice transferred into the game.

“I do feel better,” Dorrell said. “The things that we did over the week, we executed well on those things, and it worked for us. I’m glad that the correlation of having great practices translated into the game. They had their best Friday [practice], and it looked like we made progress there. They know that when we put together a good week of practice, this is what we can be, and they’re buying into that.”

Lewis finished the day completing 25 out of 33 passes for 224 yards and three touchdowns. Lewis was able to have one of his best career games due to the help of freshman wide receiver Brenden Rice as he was able to create open space downfield for a total of five receptions for 102 yards and a touchdown. Rice also amassed 162 return yards on six kick returns and 17 rushing yards on one carry, totaling 281 all-purpose yards. Rice mentioned how he thought he had another opportunity to score but fell short of the end zone.

“I thought I was gonna take it to the house,” Rice said. “Out of nowhere, I see a flash of green or yellow or whatever they are, and I just got hit. I was very disappointed. I was trying to get to the end zone all day.”

The Buffs finally found the end zone in the second quarter after freshman quarterback Brendon Lewis threw a nine-yard pass to freshman wide receiver Ty Robinson for just his third career catch and his first career touchdown with Colorado. This touchdown snapped a five-quarter scoring drought, as Colorado could not score a touchdown in last week’s matchup against the California Golden Bears.

The Buffaloes also scored a second touchdown in the second quarter right before heading into halftime when Lewis threw a two-yard touchdown pass to junior tailback Alex Fontenot making the score 31-14, entering the third quarter. Rice discussed how even though the team is starting to look better, there is no time for moral victories as they still lost by 23 points.

“We had a loss today, but you saw a lot of growth from our O-line to our QB to receivers, to all of us in general,” said Rice. “You just saw that jump from us as an offense – as a complete offense. But, there are no moral victories. We didn’t get the win, so that’s all that matters.”

Penalties hindered the Buff’s success as they committed 11 penalties, resulting in 75 free yards for Oregon. Before the first half was over, Colorado’s defense showed too much aggression as they were caught offsides four different times. All-American senior linebacker Nate Landman did not suit up to play, which might explain the lack of leadership on the defensive side of the ball.

Out of the nine total possessions for Oregon, they scored a field goal on one possession and a touchdown on seven other possessions, meaning they failed to score only one time all game. As the offense showed signs of finally putting the pieces together, Colorado’s defense had a rough day, allowing 32 first downs and a total of 568 yards in the game. Dorrell explained that the team wanted to be cautious of Landman’s injury as he had an opportunity to have a successful post-collegiate career.

“We want to do what’s best for Nate, too,” Dorrell said. “He has a potential career beyond here, so I want to make sure that when he’s ready to play, he’s ready to play. We don’t want to jeopardize his career and all those things.”

Despite the loss, Colorado put up 29 points against the 7th ranked team in college football. After trailing 31-14 at the half, Fontenot found the end zone for the second time of the game, the first time Colorado has scored three touchdowns against a Football Bowl Subdivision (FBS) team this season. The Buffaloes will face the Oregon State Beavers (5-3) at Folsom Field on Saturday, Nov. 6th, at 5:00 p.m. MST.