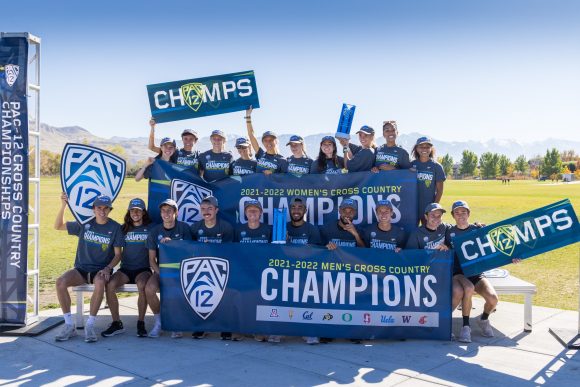 What a day it was in Salt Lake City for the Colorado Buffaloes on Oct. 29. The brooms were in full force as both the men’s and women’s cross-country teams swept up titles at the 2021 Pac-12 Championships. The Buffs had an even more dominant day as senior Abby Nichols won the individual title in the women’s 6k race.

“Right now, we’re telling them to enjoy it, have fun, and back to work tomorrow,” Wetmore said.

The men’s race started the Buffs’ golden day, and the Colorado men looked ready to show the conference why they are ranked third in the country. At the 2k split of the 8-kilometer race, CU seemed very poised and comfortable with five runners in the top-10 and leading the front pack.

Stanford had closed the point gap at the halfway mark, and Colorado only led by a mere 4 points heading into the second half of the race. The field had spread out considerably, but Colorado stayed composed and held three runners in the top-10.

A key to this race for the Buffs was holding position between the 4k split and the 6k split. Stanford was unable to gain any ground on the Buffaloes, and their lead remained at four. Senior Eduardo Herrera moved into first trying to repeat his good fortune and win back-to-back individual titles, while his teammates held their top-10 positions behind him.

The final two kilometers were especially noteworthy as the Buffs cut their point total from 43 to 39 (scoring the fewest is the goal). Stanford meanwhile lost ground as Colorado’s runners were able to move up and pass the Cardinal’s runners. Herrera was in the mix again to claim the title but settled for third as he could not hold off Stanford’s Charles Hicks and Oregon’s Cooper Teare.

“The guy who won the race is an excellent runner; he’s beaten Lalo (Eduardo Herrera) a couple of times,” Wetmore said. “The guy who was second, who Lalo almost caught, has a superior 5k on the track. We knew he (Teare) would be formidable – he was not in this race a year ago. Every race is different. Lalo was the defending champion, but only very, very good individuals were ahead of him today.”

As impressive as Herrera was, his teammates matched it. Junior Austin Vancil and senior Andrew Kent were able to cross the line in 6th and 7th, respectively, before Stanford’s third runner. The trophy was wrapped up for the men when CU’s following three runners: seniors Charlie Sweeney, Brendan Fraser, and Stephen Jones, crossed the line together in 11th, 12th, and 13th. The team effort gave the men six runners in the top-13.

“I couldn’t have asked for better,” Wetmore said. “They were smart and patient. They got up early, which you have to do in a good race. Then they kept the pressure on. The attrition happens, and it often does, and at the end, they’re on the podium.”

As for the fourth-ranked Colorado women, their race started similar to the men’s and was very tight at the 2k mark. Sophomore Emily Covert led the way coming into the split in third place, followed by two more Buffs in the top-10, seniors Abby Nichols and Rachel McArthur.

The women’s 4k split told a whole different story than the men, as the Buffs had gotten out to a healthy lead of 24 points ahead of Utah. Covert had moved up to second while Nichols was in fourth and McArthur held steady in eighth. Senior India Johnson and freshman Hannah Miniutti each moved up five places to give CU their significant lead.

Nichols, Covert, and Utah, Utah’s Emily Venters, all pulled away from the pack after the 4k mark. With around 1k to go, Nichols made her move to the front passing Venters. It was a bold but necessary move if Nichols was going to pull off the title.

“I just felt right,” said Nichols on her move. “Once I made the move, I couldn’t go back, so I had to keep trudging forward.”

Nichols was rewarded for her move a kilometer later, pulling off the title with a finishing time of 20:25.4. The Buffs delivered a one-two punch, with Covert finishing second behind Nichols.

Wetmore was particularly impressed with his front two runners’ ability to grow and improve over the past year and how those improvements paid off today.

“I believe Abby’s establishing herself as one of the best runners in the country,” Wetmore said. “She was savvy again this time, patient, and had another nice win. As for Emily, she is a very different runner than a year ago. She’s made enormous strides in the last 12 months, and she had an excellent race today.”

Two other Buffs who capped the impressive day of Colorado cross country were Johnson and McArthur, who placed in the top-5.