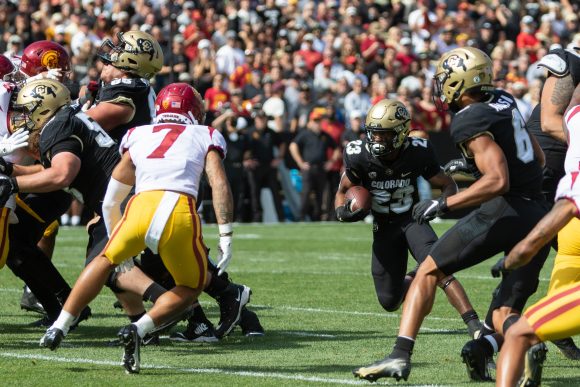 Sophomore tailback Jarek Broussard (23) finds an opening to get through during the second quarter. Oct. 2, 2021. (Kara Wagenknecht/CU Independent)

After an uninspiring start to the 2021 season, which includes four straight losses, the University of Colorado Buffaloes (1-4, 0-2 Pac-12) look to turn their season around against the University of Arizona Wildcats (0-5, 0-2 Pac-12) at Folsom Field on Saturday, Oct. 16. The Buffs hope to buck Arizona’s dominance in Boulder, where the Wildcats have won four straight dating back to 2013.

Colorado is coming off a bye week, and head coach Karl Dorrell spoke about the importance of a physical and mental reset for both the players and coaches.

“To have a little bit of a breather, step back and be ready to go this week,” said Dorrell. “In today’s practice, it was really evident of renewed energy and excitement about what’s lying in front of us right now.”

With the bye week in hand, CU hopes specific changes to their offense will be enough to propel them to their first conference win of the season against the last place Wildcats. Dorrell did not reveal any significant changes, instead just tweaking a few things that have caused the offense only to score 34 combined points in the last four games.

“Hopefully, the changes we’ve made are going to help us play more efficient and effective football,” said Dorrell. “We addressed many things, from coaches’ roles in terms of what the expectations are, the expectations of our players. Both sides, the coaching side of it, and the player side of it, they’ve owned up that we can be better.”

The Buffaloes offense has struggled to sustain long drives that result in touchdowns. As an offense, CU ranks second to last in the Football Bowl Subdivision (FBS) in scoring (13.8 per game). Sophomore tailback, Jarek Broussard, believes one solution to CU’s offense woes is for everyone to understand the task at hand and stick together as a unit to improve their results.

“We’ve just got to get everybody to believe in it,” said Broussard. “It’s hard if everybody’s not on board. We’ve got to bring it together as a team. We need all 11 [players].”

As for Colorado’s opponent, the Arizona Wildcats, who have even more pronounced struggles than the Buffs, have yet to win and suffered a loss against Football Championship Subdivision (FCS) school, NAU. Arizona, led by first-year head coach Jedd Fisch, has also lost a school record 17 straight games, including at home to CU last December.

After a week to work out the problems, the CU offense will hope to unlock itself and exploit an Arizona defense that is giving up a conference-leading 31.6 points per game. Arizona will also be without their starting quarterback, sophomore Jordan McCloud, who was ruled out for the season earlier this week.

In a matchup containing two of the least prolific offensive teams in the country, the game will come down to which offense can sustain multiple scoring drives and not squander scoring chances. The game will be televised on the Pac-12 Network, with kickoff slated for 1:30 p.m. MT.