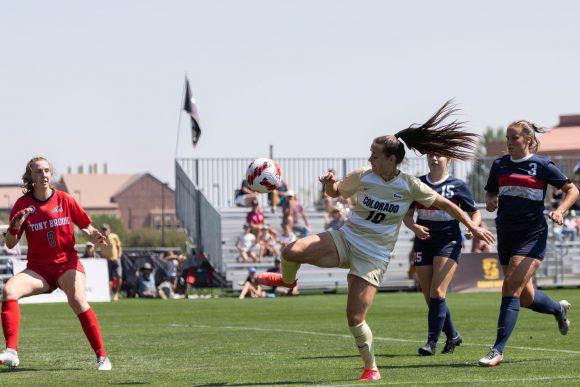 On Thursday, the University of Colorado Soccer team returned to Prentup Field to play the University of Washington, looking to avenge last week’s heartbreak of a draw that saw the Buffs spoil a 2-0 halftime lead against the California Golden Bears. After exchanging first-half goals with the Huskies, the Buffs took the lead for good on a Shanade Hopcroft penalty kick in the 31st minute. Colorado (6-3-1) never looked back as they held off Washington’s (2-5-2) second-half attack to secure a 2-1 win.

“We have to take care of business at home,” said head coach Danny Sanchez. “This is Pac-12 soccer for the players that haven’t been indoctrinated into it. This is what you are going to get every Thursday and Sunday. So, we are pleased with the result today, but obviously now, after treatment and recovery, our focus is Washington State this Sunday.”

Like the week prior, it hardly took any time for the Buffs to get their first points on the board. In just the 7th minute of play, senior midfielder serviced a corner kick into senior defender Hannah Sharts. The ball exploded off the head of Sharts and past the Washington goalkeeper Olivia Sekany to give CU a 1-0 lead.

Sharts has been deadly on corner kicks the last couple of seasons. Thursday’s goal is already her second of the year, coming from a corner kick.

“She [Hannah Sharts] is taller than everyone,” said Shanade Hopcroft. “Plus, she can head the ball. So that is a plus and a plus. I usually aim for her.”

It didn’t take long for Huskies to respond, scoring a goal in the 19th minute. Working in the box, midfielder Ameera Hussen tapped a pass to a charging Vanessa Millsaps. Millsaps took the ball in stride and scorched the ball to the upper part of the goal. Junior goalkeeper Dani Hansen jumped up to block the shot, but the ball soared over Hansen’s extended arms to knot up the game at a goal apiece.

After the goal, the Buffs continued to apply good offensive pressure and, in the 31st minute, caught a bit of a break as a Huskies’ defender errant handball in the box set up a Hopcroft penalty kick. On the ensuing kick, Sekany guessed left, but Hopcroft sent the ball opposite the goalkeeper to take a 2-1 lead. The goal was Hopcroft’s 4th of the season and now makes it three straight games in a row in which she has scored a goal.

In the second half, CU continued to battle against the Huskies. They could not expand their lead despite a few good scoring chances by freshman forward Hannah Duguid and junior forward Tessa Barton. In the last ten minutes, the Buffs battled through an intense Huskies attack and survived one final scare as a late goal for Washington was ruled offsides allowing CU to clinch a 2-1 win.

Colorado will now move on to their next opponent, a red-hot Washington State Cougars team that will enter the match riding high on a five-game win streak and carrying a sterling 8-1-1 record. That game will take place at noon MST this Sunday, Oct. 3 at Prentup Field.