High temperatures have consequences for Buffs and the state 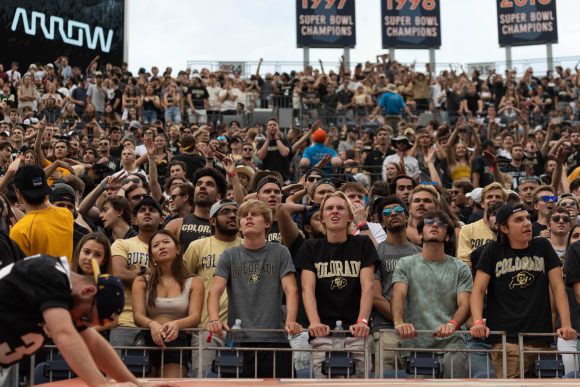 93-degree weather drew crowds at Empower Field at Mile High to watch the Buffs compete against Texas A&M on Sept. 11. A saxophone player since high school, Laynie Metsker has grown familiar with games like these. But, she said, the heat became insufferable that day.

“Don’t pass out — that was basically the goal of the day,” said Metsker.

Metsker stood alongside her Golden Buffalo Marching band members, practicing fight songs as the sun beat down on her face. Between lyrics, she said that her bandmates couldn’t help but focus on the oppressive heat. She heard them complain about it. It’d be one thing to be standing in shorts and a t-shirt, but a scratchy, unreasonably thick marching band uniform? That’s a whole other battle.

“It’s hard,” she said. “Your focus can get taken away [from playing] by how hot it is or how much you think you need water.”

Throughout only the past couple of months, Colorado and the Boulder area have seen substantial heat, with Denver breaking the record for the hottest day in September — the same Saturday the Buffs were at Mile High.
Sebastian Schmidt, a NASA Scientist and CU Associate Professor of Atmospheric and Oceanic Science has an explanation as to why this kind of heat has become so common.

“In a general sense, this warming is coming from emission of CO2,” said Schmidt. “This is a cumulative effect. Different countries started contributing these emissions over centuries when industrialization increased.”

CO2 emissions are causing not just the increased heat in the weather and the atmosphere, but the increased extreme weather conditions, like increased rainfall in certain parts of the country and drought in others, and hurricanes with increased intensity, creating more deadly and disastrous conditions for vulnerable populations.

As our climate and weather have continued to impact us, Schmidt says two things could be done to mitigate our impact.

First, for individuals looking for something small to decrease their impact on the environment, Schmidt recommends eating less meat.

Second, he stresses the importance of companies becoming carbon neutral.

As fall slowly descends upon Boulder, the heat will begin to subside — but that doesn’t mean we won’t be facing more weather anomalies anytime soon.

“That was absolutely the hottest game I’ve ever experienced. But I know there’ll be hotter ones,” said Metsker.

William Oster is the breaking news editor for the CU Independent. He's currently a junior at CU Boulder majoring in journalism with a minor in political science. When he's not reporting on breaking news, he's either hiking or asking people if they listen to Fiona Apple or Mitski.