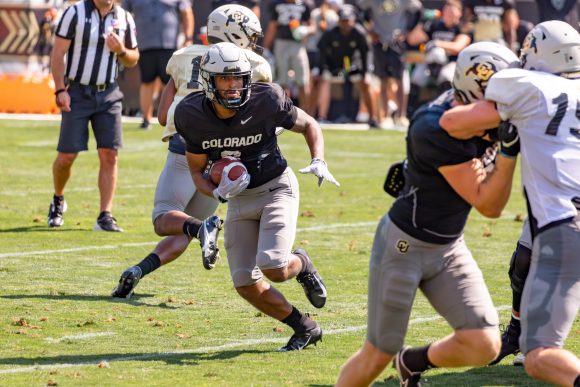 Junior tailback Alex Fontenot keeps his eyes up as he drives the ball down the field.Aug. 14, 2021 (Casey Paul / CU Independent)

The Colorado Buffaloes will take on the Northern Colorado Bears on Friday, Sept. 3, in their home opener at Folsom Field. Colorado is 10-2 all-time against the Bears with their first meeting dating back to 1900. Friday will mark the Buffaloes’ 132nd season opener and they currently stand at 82-44-5 in those games.

After a COVID-shortened six-game 2020 season, the Buffaloes will play a normal 12-game season. While the Buffaloes had a shortened season last year, Northern Colorado did not play a single game. The opener will make it 650 days since the Bears last played in a football game. Leading the Bears as head coach is former Denver Bronco wide receiver Ed McCaffrey, who is the father of Carolina Panthers tailback and Colorado native Christian McCaffery.

As the Buffs finished last year’s regular season at 4-1 prior to their loss in the Alamo Bowl, head coach Karl Dorrell looks to start his second season with Colorado in the win column.

“We’re getting ready for a great game,” Dorrell said. “It’s a difficult game because we don’t know a lot about this team and it’s going to be a tremendous challenge for us. But our guys will be ready to play.”

Interestingly, this is Colorado’s second consecutive season with a quarterback that hasn’t yet started a college game. This year’s starter, second-year freshman Brendon Lewis, came into December’s Alamo Bowl late in the game and completed six-of-10 passes for 95 yards. Another weapon in the offense is sophomore tailback, Jarek Broussard. The 2020 Pac-12 Offensive Player of the Year has the opportunity to build on his 162.2 total yards per game.

On Monday, Lewis shared his emotions preparing for the first game of the year.

“I’m super excited for this game,” Lewis said. “I’ve been looking forward to it all summer. Getting prepared for it has made me extremely excited for it.”

Leading things on the defensive side of the ball is senior linebacker Nate Landman, who received second-team All-American honors after his 61 tackles and five sacks last season. After recovering from an Achilles injury for the past eight months, Landman discussed how this Colorado team is shaping up.

“I love this defensive unit because of the leadership we have,” Landman said. “We have seniors in places where we need seniors, and we have young guys that have that ability to be the best in the conference. I think we have a lot of potential this year. We have the perfect combination of leadership, players, depth and coaches to really do something this year.”