Breaking down the Buffs offense 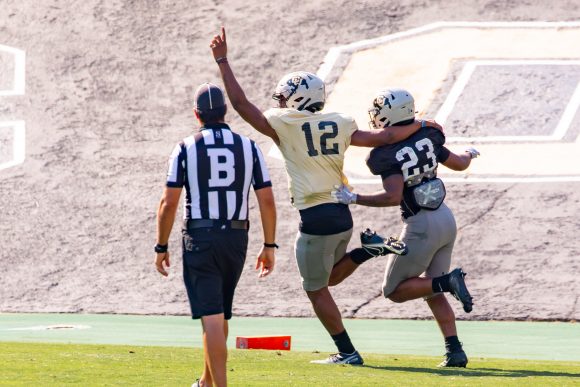 With intriguing position battles, a loaded group of receivers and the 2020 Pac-12 Offensive Player of the Year, the Colorado Buffaloes have the pieces in place for a productive offensive unit. Here’s where the Buffaloes stand just past the midway point of preseason camp:

The quarterback room took a hit when Tennessee transfer sophomore J.T. Shrout went down in Saturday’s intrasquad scrimmage with a knee injury. After rolling out of the pocket and running down the left side of the field, Shrout’s knee buckled and he was forced to exit the field on a cart. Head coach Karl Dorrell shared his thoughts on the unfortunate injury.

“It’s one of those things with football, sometimes that happens,” Dorrell said. “We’re hoping for the best and sending our prayers. He’s the type of kid, whatever the situation is, he’ll bounce back from it and try to get back as quickly as he can.”

Shrout, who was battling second-year freshman Brendon Lewis for the starting quarterback position, will require surgery and will miss an extended period of time. With Shrout now unable to compete, the starting role is handed to Lewis, a former four-star recruit from Melissa, Texas. Lewis impressed in his debut during CU’s appearance in the Alamo Bowl last season. He will now be tasked with leading the offense from the opening snap. Dorrell said freshman Drew Carter will take over backup duties and freshman walk-on Jordan Woolverton will be CU’s third option.

The Buffaloes’ biggest offensive threat of last season will look to repeat a similar stat line this year as the 2020 Pac-12 Offensive Player of the Year sophomore tailback Jarek Broussard will take the lead out of the backfield. Broussard rushed for a 66-yard touchdown and a 42-yard gain in Saturday’s scrimmage and seems to already be in mid-season form. Junior Alex Fontenot and freshman Ashaad Clayton will also see playing time behind Broussard as they have both turned heads throughout preseason camp as well. Fontenot, who led CU in rushing in 2019, missed last season due to an undisclosed injury but expects to be back in the picture this year.

“The depth of that position is going to allow us to not really use one workforce, so to speak, in the backfield and they all understand that,” Dorrell said.

Sophomore Dimitri Stanley and juniors Jaylon Jackson and Daniel Arias will attempt to use their experience to not only provide success for the Buffaloes offense but also mentor the young talent within the wide receivers room. They’ll be working with Brenden Rice and Montana Lemonious-Craig, who are two talented second-year freshman receivers that have been taking first team reps throughout preseason camp. The depth continues with third-year freshman La’Vontae Shenault and Keith Miller, who could potentially be breakout candidates in helping Lewis run up the offensive numbers.

With former Colorado offensive tackle William Sherman being selected in the sixth round of the NFL Draft by the New England Patriots, there will be some opportunity open within the offensive line. Senior guard Kary Kutsch, sophomore tackle Frank Fillip and junior center Colby Pursell hold the most experience and are favorites to start at the line on opening day. Ohio State transfer senior Max Wray, sophomore Kanan Ray, junior Chance Lytle, sophomore Casey Roddick, freshman Gerad Christian-Lichtenhan and Iowa transfer junior Noah Fenske are also top candidates to fill the remaining spots on the O-line, among others. 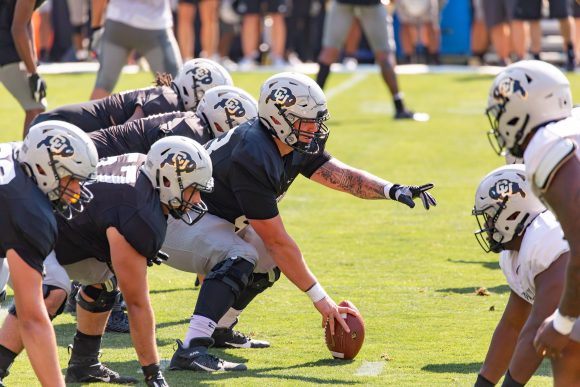 Freshman offensive lineman Noah Fenske talks to his opposing teammates as he gets ready to start the next play. Aug. 14, 2021 (Casey Paul / CU Independent)

“We had to make a couple of changes here and there positionally moving tackles around, moving guards around,” said offensive line coach Mitch Rodrigue. “Offensive line is a position where there’s a lot of communication going on and a lot of footwork fundamental technique stuff so it takes a while to catch up. I’m pleased with our effort right now, we just got to get a little better on some things.”

Junior tight end Brady Russell is assumed to take the starting role but was a nonparticipant in Saturday’s scrimmage. With 10 tight ends on the roster, Russell’s absence allowed for others such as junior Jared Poplawski and third-year freshman Alec Pell to see additional reps. Poplawski and Pell took advantage and both hauled in a touchdown on Saturday. Offensive coordinator and wide receivers coach Darrin Chiaverini discussed what Pell has brought to the practice field thus far.