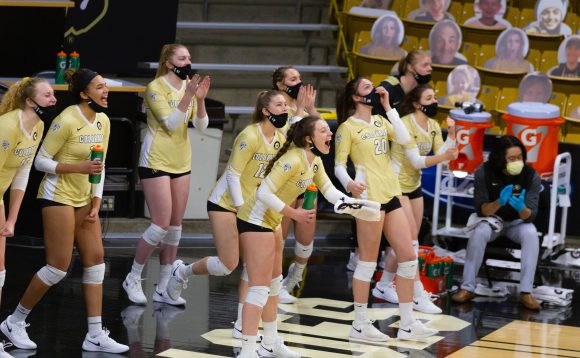 Members of the CU women’s volleyball team cheer on their teammates from the sidelines. March 7, 2021 (Kevin Wu/CU Independent)

Coming off a delayed spring season, the University of Colorado volleyball team recently reported back to campus to prepare for the upcoming competition.

Although the Buffs finished with a disheartening 8-12 record this past spring, they produced an 8-3 home record, including upsets over multiple ranked Pac-12 opponents. On the road, however, CU struggled with an 0-9 record.

“We were winless on the road last season, you can’t hide from that,” said head coach Jesse Mahoney. “I also don’t want to think about it every day because then that becomes the mindset as well. We’re going to go through our preparation like we normally do.”

Most importantly, winning requires a top-notch team, which the Buffs have been working towards this offseason. Mahoney managed to keep the majority of his team while drawing five talented incoming freshmen to the program.

“We have more upperclassmen than underclassmen, so I think that the veteran team and the five really good freshmen we have, we have a chance to be really, really good,” said junior ride side and middle blocker Sterling Parker. “I think going into a normal season is going to be really exciting for everyone.”

Amongst this strong team are some newcomers that could make a big impact early. This includes a pair of freshmen in Jahara Campbell, an outside hitter, and Taylor Simpson, a setter. Both were ranked in the top-50 2021 volleyball players in the nation by Volleyball Mag. They should be solid replacements for senior setter Jenna Ewert and graduate outside hitter Leah Clayton when they graduate this year.

Ewert started every match at setter during the 2020 season and posted impressive numbers, including a 60-assist performance against then-No. 10 Washington.

Along with Ewert, redshirt senior libero and setter Brynna DeLuzio has been electric since she was forced to redshirt her sophomore year due to medical conditions. She led the team with 223 digs in 2020 and will likely split time with the other liberos.

With an improved team, the Buffs hope to be better prepared in a strong Pac-12, which is arguably the best college volleyball conference in the nation.

“In the Pac-12 on any given year you’re going to have nine or ten (ranked) teams, and the teams that aren’t in the top-25 are really good as well,” Mahoney said. “It’s a fight every night.”

The Buffs will hold an intrasquad scrimmage on Aug. 21 before visiting North Carolina to play in the Charlotte Invitational. Colorado will play an exhibition game against South Carolina State on Aug. 27 before facing Xavier and Charlotte in a regular season opener doubleheader on Aug. 28 to close the trip.