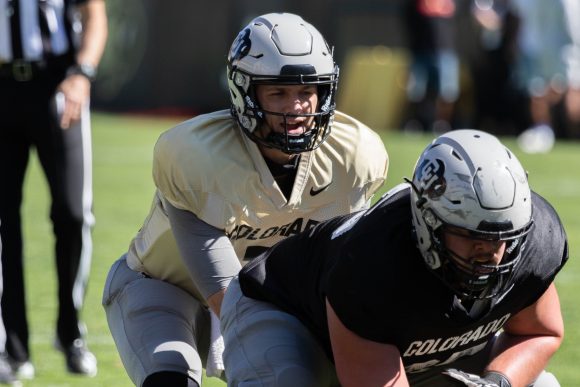 With the college football season approaching quickly, the University of Colorado Buffaloes began its annual preseason camp Aug. 5. Colorado finished last year’s shortened season at 4-1 with a loss in the Alamo Bowl and head coach Karl Dorrell’s squad is looking for continued success this fall.

After shaking off the cobwebs on day one of preseason camp, Dorrell shared his takeaways from the Buffs’ performance and effort.

“That was a good first day,” Dorrell said. “I like the effort and attitude. I can tell from today’s practice they’ve put in work this summer, I can definitely tell. But we’re not where we need to be. We’re on a gradual incline of getting better and better.”

Arguably the most intriguing topic of discussion within this year’s roster is the battle for the starting quarterback role between Tennessee transfer sophomore J.T. Shrout and former four-star prospect and second-year freshman Brendon Lewis. Passing game coordinator and quarterbacks coach Danny Langsdorf analyzed the competition between the two talented quarterbacks.

“I’ve been really pleased with both,” Langsdorf said. “The preparation through the summer is obvious. They’re both taking turns and getting even reps. We’ve been accurate with the ball, know where to go with the ball, managing the run game and they are getting us in the right plays and protections. I’ve been pleased so far to this point.”

Langsdorf, who is a crucial part of making the final decision as to who will start under center this season, also explained how both candidates get graded and analyzed throughout every practice depending on each of their skillsets.

“It’s a daily seven-on-seven and team grade on every play,” Langsdorf said. “They’ve taken even reps all the way through. They get graded on every play and we have statistics on the throws and grades on the run plays too. It takes some time because we really want to look at it fairly and make sure we get them the same situations. They have different play styles so when you ask one to do something that maybe the other one is a little bit better at, you have to flip that and make sure both of them are getting equal opportunity on a lot of different systems of plays.”

Lewis made his CU debut in last season’s Alamo Bowl against Texas and impressed with 95 passing yards on 6-of-10 throws. He discussed his growth from arriving on campus in 2019 and acknowledged how Langsdorf has helped him along the way.

“Since I came in here in 2019, I’ve grown tremendously,” Lewis said. “Specifically through relationships, the skill of the game, the knowledge of the game, the speed of the game, and every time I step on the field, I feel like I’m able to grow. Coach Lang has helped me tremendously. He’s really the reason I’ve grown so much because he’s so smart and knows a lot about the game so I’m just feeding off of him.”

Meanwhile, Shrout examined how his battle this year in Colorado is different from what he faced in Tennessee before transferring in the spring.

“I think this is the first time I’ve really been given a legitimate chance (to start),” Shrout said. “Being at UT the last few years we had a starter every year so you go in competing for a back-up job. This is the first year I’ve gone out to try and do everything to be the guy. Obviously, you learn a lot. This is my third offensive coordinator and third quarterback coach. You get to learn a lot from different coaches and obviously you get to learn from the players you’re around and that you’ve played with.”