A look back at the year in CU Athletics 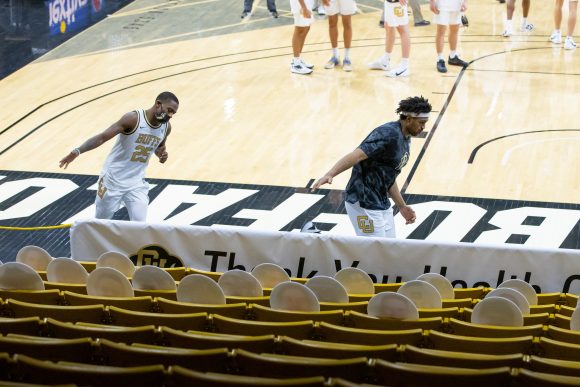 From the start of classes in August to the beginning of May, University of Colorado athletic programs had a lot to celebrate during the 2020-21 season.

The CU football team had a short, yet successful season, finishing second in the Pac-12 South behind Southern California. That matchup between the Buffs and Trojans was canceled, however, due to COVID-19 issues with USC. The Buffs finished with a 4-1 regular season record and had the opportunity to compete against Texas in the Alamo Bowl, where they were ultimately defeated by a strong Longhorns team. Sophomore tailback Jerek Broussard led the Pac-12 with 172.3 yards per game and won Pac-12 Offensive Player of the Year honors. He was also the CU Co-Athlete of the Year on the men’s side, an honor shared with senior guard McKinley Wright IV of the men’s basketball team and sophomore skier Magnus Boee. After a strong spring season, the Buffs look to compete for a Pac-12 title in the fall.

Head coach Tad Boyle and the CU men’s basketball team finished the season with a 23-9 record and competed in the NCAA Tournament. The Buffs beat Georgetown in the first round before being taken down by the Florida State Seminoles in round two. Wright was named to the Pac-12’s First Team and All-Defensive Team, as well as winning CU’s Chauncey Billups MVP Award. Following the season, Boyle landed a few top recruits, including 4-star guard Kenneth Simpson Jr., who was previously committed to Arizona. Landing Simpson helped the Buffs form the ninth-best 2021 recruiting class according to 247 Sports.

CU volleyball had a rollercoaster year navigating a difficult conference-only schedule. With an 8-12 overall record that included 10 games against ranked opponents, the Buffs went 8-3 at home, but a dismal 0-9 away from Boulder. Two huge upsets over ranked opponents, No. 12 UCLA on March 7 and No. 11 Utah on March 19, were two bright spots on the season. Colorado will retain most of its team with only one player, graduate middle blocker Rachel Fara, wrapping up her college career.

Both the men’s and women’s track and cross country teams impressed in 2021. In cross country, Men’s senior Eduardo Herrera took home the Pac-12’s individual title, while both the men’s and women’s teams took second place in the Pac-12 Championships. Senior Sage Hurta won the CU Female Athlete of the Year as she was declared the Indoor Mile National Champion. A First Team All-American, Hurta also set the school record in the 800m.

The CU men’s golf team placed ninth at the Pac-12 Championships while the women’s team took 7th place. Men’s senior golfer Daniel O’Loughlin was a finalist for the CU Male Athlete of the Year.

Colorado lacrosse finished 8-6 overall and advanced to the Pac-12 Championship Game for the third time. The Buffs couldn’t claim the conference title and were narrowly excluded from the NCAA tournament. Senior goalie Julia Lisella won Pac-12 Defensive Player of the Year honors.

Playing in one of the most talented conferences in the country, the CU women’s hoops team fared well with an 8-8 Pac-12 record. The Buffs’ top moments included defeating the No. 1 Stanford Cardinals on Jan. 17 and advancing to the Women’s National Invitational Tournament quarterfinals.

Finishing 9-6-2 on the season, the Colorado soccer team advanced to the NCAA Tournament but came up short in the first round against South Alabama. However, they took home some big wins against then-No. 10 California on March 5 and then-No. 14 USC on March 15.

Colorado’s women’s tennis team struggled to find momentum and finished with a 9-12 overall record. The Buffs were swept by Washington State in the Pac-12 Championships but did beat then-No. 12 California earlier in the season.