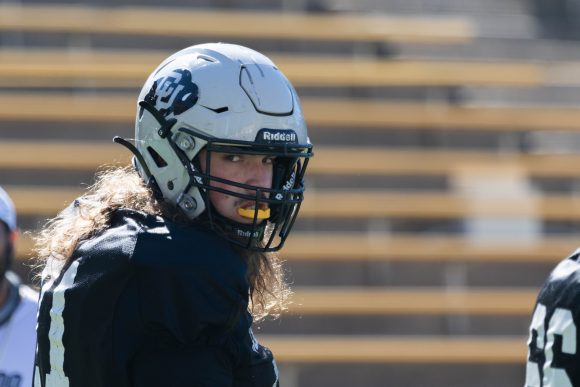 Junior inside linebacker Jonathan Van Diest waits for the play to be called at Folsom Field on April 30, 2021. (Kara Wagenknecht/CU Independent)

With 2020 team-leading tackler senior inside linebacker Nate Landman recovering from an injury, a slew of less-experienced linebackers have stepped up this spring for the University of Colorado football team.

Junior inside linebacker Jonathan Van Diest led the team on Friday with five unassisted tackles. In four games last season, Van Diest recorded 11 tackles. He said the abundance of reps during the spring helped him improve not only physically, but mentally.

“I feel like I got a lot better,” Van Diest said. “The reps definitely helped. The more reps you get, the more you can get better. If I make mistakes I can fix them and have more time to correct it.”

Van Diest’s emergence is a welcome sight as Colorado’s linebacker group has been decimated by COVID-19 in April. Junior inside linebacker Quinn Perry, freshman inside linebacker Marvin Ham II and junior outside linebacker Jamar Montgomery were all forced to miss practice time due to COVID-19 protocols. Van Diest, however, took full advantage of being able to attend every practice.

“The guy that’s probably had a really good spring, he’s very consistent and has been at every practice, has been Jon Van Diest,” Dorrell said. “He’s made huge strides over the spring.”

Only graduate transfer inside linebacker Robert Barnes was able to match Van Diest’s five tackles on Friday. Barnes played in 34 career games over four seasons at Oklahoma before signing with CU in January. Dorrell said that Barnes is continuing to learn CU’s system but has been a stable linebacker.

Another strong showing in Friday’s scrimmage came from redshirt freshman outside linebacker Joshka Gustav. A 2018 recruit out of Germany, Gustav recorded three tackles and a team-leading two sacks in the 51-minute scrimmage.

Van Diest had high praises for Gustav after the spring finale. He said that Gustav will work on his craft for “hours on end” outside of practice at Kittridge Field. Gustav’s efforts showed on Friday.

“Joshka is a player that has continued to pour into his game in the off-season,” Michalowski said. “He was one of the guys that took advantage during the idle time with COVID, in getting a lot of personal work in.”

Not to be forgotten is junior outside linebacker Carson Wells. Dorrell said that Wells, who recorded two tackles in Friday’s scrimmage, had an “excellent” spring. The expectations are high for Wells after he was awarded first team All-Pac-12 honors last season.

Because the Spring Showcase was not a display of CUs roster at full strength, it became a valuable opportunity for a handful of younger Buffs. Two freshmen, outside linebacker Devin Grant and inside linebacker Geno Macias, also played well in their Folsom debut with three tackles each.