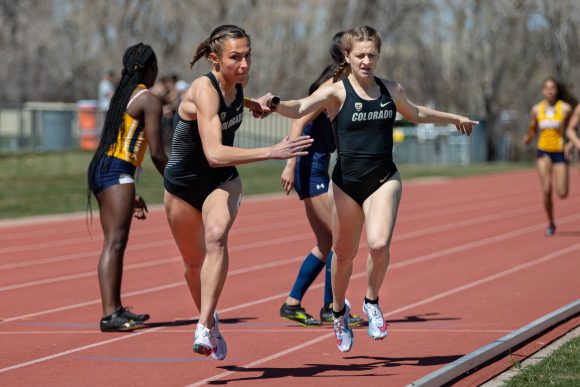 Senior sprinter Sage Hurta, takes over the baton for the final leg of the women’s 4×400 relay at Potts Field during the 2021 CU Invitational. April 10, 2021 (Nigel Amstock/CU Independent)

After an impressive week for the University of Colorado’s track and field team, all eyes will be on the West Coast Relays in Fresno, California on Friday. The Buffs will get one of their final two tuneups before the 2021 Pac-12 championships begin May 14.

The West Coast Relays will boast many of the top track and field programs across the country. Along with Colorado, its Pac-12 rivals Washington and Stanford will send a strong contingent of athletes. BYU and Northern Arizona, two teams that ran strong at the NCAA Cross Country championships, will also send their top athletes to Fresno.

For the Buffs, the 5,000 meters will be an important race on both the men’s and women’s teams. The men will have seven runners including graduate John Dressel who already has a time low enough for the NCAA Regionals. The men’s race will also include one of the top distance runners in the country in Northern Arizona’s Luis Grijalva who ran a 13:16 in the same event in 2020. On the women’s side, senior Abby Nichols will joing three other CU runners in the 5,000.

Pac-12 Runner of the Week and CU Female Athlete of the Year senior Sage Hurta will run in the 800-meter race. In the USATF Grand Prix on April 24, she ran the 1,500-meter in a record-breaking time of 4:08.38, the 11th-fastest in NCAA history. Washington’s Carley Thomas and BYU’s Anna Camp-Bennett should give Hurta a strong competition that she may have missed being the only collegiate runner in the 1,500 Grand Prix.

Both the men’s and women’s 1,500-meter races will contain multiple Buffs including men’s senior Eduardo Herrera. Herrera is still searching for a qualifying time for the NCAA West Preliminary. The race should provide a favorable opportunity for Herrera to qualify as BYU’s Conner Mantz, who finished first in the NCAA Cross Country Championships in March, and NAU’s Nico Young, who finished fourth, should keep the pace high.

Women’s senior Rachel McArthur and fellow senior Micaela Degenero will lead the women’s 1,500-meter contingent and will look to build off their 800-meter races where they finished third and fifth, respectively. Graduate student Madison Boreman will also run in the 1,500 after racing an Olympic Trials qualifying mark of 9:48.09 in the steeplechase.

Senior sprinter Eriana Henderson will also be looking to improve her time in the women’s 400-meter hurdles to prepare for regionals and the Pac-12 championships. Men’s Senior Dominique Williams will compete in the hammer throw and junior runner Jonathan Horton in the 800-meter will look to hit the qualifying mark for the 32-member NCAA West Preliminary in late May.

The West Coast Relays is one of the most competitive meets the Buffs have on their schedule. This meet and next week’s Air Force Twilight Invitational are key to getting ready for postseason meets and qualifying marks. After these final two meets, the Buffaloes will head into the 2021 Pac-12 Championships from May 14 through May 16.