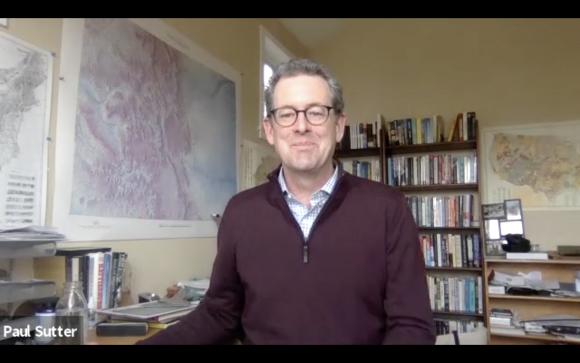 Paul Sutter, Professor of History hosted an event out of the Center for Asian Studies. (Alex Zyles/CU Independent)

Paul Sutter, history professor and series editor for Weyerhaeuser Environmental Books, hosted the event which brought together three authors from across the nation to talk about their East Asian environmental history series.

Jakobina Arch, associate history professor at Witman College, introduced her 2018 book, “Bringing Whales Ashore: Oceans and the Environment in Early Modern Japan.” The book focuses on the human relationship with whales in Japan as a piece of maritime history as well as on whaling in general, which she feels that Japan’s environmental history tends to ignore.

“In fact, during this period, one of the things that happened was that they were running up the limits of terrestrial resources and had to focus on pulling in more oceanic resources and whaling groups are one of these,” Arch explained.

Arch’s book offers an argument that whaling is not a sustainable way of obtaining resources, and that cultural whaling often ignores historical and modern changes in the environment.

David Fedman, a historian and associate professor of history at the University of California, Irvine, also explored the environmental history of Japan, specifically its impact in Korea. His 2020 book titled “Seeds of Control: Japan’s Empire of Forestry in Colonial Korea” highlights Japan’s role in modern forestry efforts in Korea.

“For me, this is a groundbreaking study of Japan’s early modern forestry. So part of what I’m trying to do is bring that story into the 20th century into the age of high imperialism and industrial capitalism,” Fedman said.

Fedman recognized through his study, that while a lot of Korean narratives recognized colonial Japan as destructive to the landscape of Korea, Japan’s efforts in planting trees have been large in the past.

“The book, at another level, is trying to restore some complexity to the conversation of ecological legacies of colonial rule on the Korean peninsula,” Fedman said.

Fedman emphasized the importance of responsibility in having conversations about the cost and benefits of large-scale forestation projects and the greenery of landscapes already belonging to people.

History professor Ian Miller of St. John’s University looked at forestry in China in his 2020 book “Fir and Empire: The Transformation of Forests in Early Modern China.” In it, he refers to the state of forestry as mostly eurocentric and his book stresses the importance of China and East Asia as part of worldwide plantation forestry.

“In China, this trend starts before 1492 and it starts outside of this Atlantic world context so it really calls into question what were some of the influence of some of the causes that led to people to start planting trees on a large scale,” Miller explained.

“East Asia was never as fully glaciated as a lot of other places in the northern hemisphere, and so there are some species, in particular plant species, that survive… in East Asia that are not in other parts of the world,” Miller said.

Through recognizing the differences in landscapes and environmental-climate history, Miller stated that resources, as well as their importance, vary. This both, directly and indirectly, impacted the economic development and growth of much of East Asia.

“Forestry as practice in Korea is fundamentally different than that in Taiwan or the Philippines or the Manchurian taiga, for that matter, so for very obvious climatic reasons, these things are differentiated,” Fedman added.

Arch explained that there are different practices in environmental studies that vary across nations culturally.