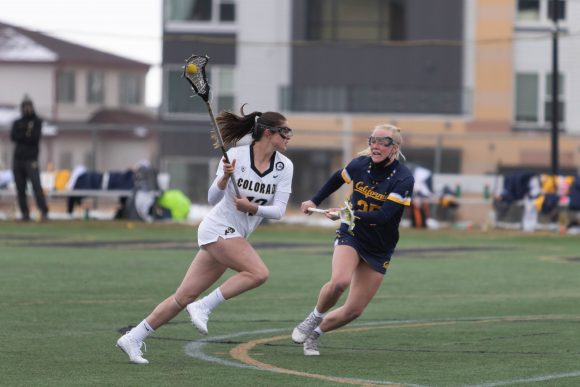 Junior midfielder Devon Bayer goes in to score the first point of the game for CU against Cal at Kittredge Field. March 22, 2021 (Kara Wagenknecht/CU Independent)

Another cancellation fell upon the University of Colorado lacrosse team when its final Pac-12 regular season match against Oregon on Friday was scrapped due to COVID-19 issues within the Ducks’ program. The cancellation was CU’s third of the conference season. Despite these missed opportunities, Colorado is riding a four-game win streak with one final non-conference match against Denver on Thursday.

With the Oregon cancellation, CU’s 4-3 conference record will likely place the Buffs as either the three or four seed going into the Pac-12 tournament.

Like most programs, the Buffs were hurt considerably by COVID-19 cancellations. Colorado missed two games against Oregon and did not have a rematch against the undefeated Stanford Cardinal. Head coach Ann Elliott Whidden spoke on the season’s tribulations.

“It’s been tough on everybody,” Whidden said. “Every few weeks we have a few ups and downs and we’re dealing with things people don’t notice just looking at the games or box scores. I think when this team can practice fully, we can do great things. But we face struggles just like everybody else that have kept people out of practice or caused us to not be able to practice at all.

Working through the ups and downs, the Buffaloes hit their stride in the final stretch of the season. Two strong wins against USC and Arizona State preceded a non-conference defeat of UC Davis. A win against a Cal on April 11 punctuated the longest win streak of the season.

“I think over the last couple weeks we’ve been able to get a little confidence in ourselves,” Whidden said. “We’ve been able to start putting some things together just by practicing and getting a little more prepared for the games as a whole.”

On the offensive side of the ball, junior attacker Charlie Rudy will be a key for the Buffs’ attacking threat as she leads CU and the Pac-12 with 44 goals. Senior defender Eliza Cahill will also look to stay strong after winning the Pac-12’s Defensive Player of the Week for her play against UC Davis and Cal.

Colorado will also need the stellar play of senior goalkeeper Julia Lisella to continue if the Buffs want to make a run in the Pac-12 tournament. Lisella has been outstanding as she is tied for the Pac-12 lead with 123 saves, good enough for seventh in the nation. She also stops 10.25 shots per game which also ranks her first in the conference and 11th in the country.

Rudy, along with second-leading scorer senior attacker Sadie Grozier, will be instrumental in keeping the Buffs close during their final stretch of games. Junior midfielder Kate Burnside, who leads the team with 47 draw controls, will also play an essential role in generating possessions for the Buffs.

The Buffaloes’ hope of gaining an NCAA tournament bid will be put to the test on Thursday at Denver. A win would be a substantial boost for CU’s resume leading up to the first round of the Pac-12 tournament on May 5.