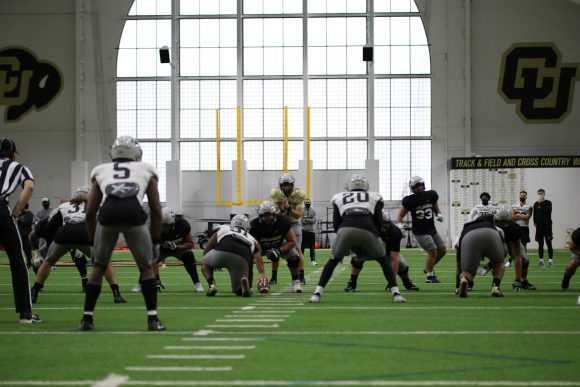 The CU football team completed its second intrasquad scrimmage of the spring on Friday, April 16. (Photo courtesy of CU Athletics)

The University of Colorado football team completed its second spring intrasquad scrimmage on Friday. With three weeks of spring practice under their belts, the Buffs took a more game-like inventory that lasted almost two hours.

Head coach Karl Dorrell said that he felt good about the team’s progress.

“I think the point right now is to finish these two weeks off and continuing to develop a depth in our program, in particular the young guys,” Dorrell said. “I think these are valuable reps for them today. To get a chance to scrimmage and play against each other, they showed good competitive stuff today.”

For the second week in a row, Colorado’s defensive unit was sharp and impressive, according to Dorrell. He emphasized how getting the younger players repetitions is key for a team with plenty of depth.

“The defense really stepped up and kept the offense out of the end zone for a number of times when we were down there,” Dorrell said. “When the defense has their back to the wall, particularly down there deep in the red zone, I think they tightened up and made it really hard to punch the ball in.”

“There is a lot of talent and depth here that will help our run game throughout the season,” Dorrell said. “Today showed that with Alex being back (and) with Jarek, Ashaad and Joe, we have a solid group with guys that will make some yards in the run game. We do have some featured plays for the backs and we feel good about our backs in space.”

Outside of the running back position, the quarterback competition might end up being a tough decision for the coaching staff to handle nearing the start of the 2021 season. Newly acquired transfer sophomore quarterback J.T. Shrout had his fair share of snaps, scoring three touchdowns in Friday’s scrimmage.

Dorrell complimented Shrout on his performance.

“He is quickly digesting our information, for a guy who wasn’t with us in the fall and came on in January. I think he’s putting in the time to really digest our information very well,” Dorrell said. “You can tell that his comfort level is really starting to get noticed. He’s being more accurate, he’s being more efficient with the football and he’s taking advantage of things that he sees.”

The former Tennessee QB talked about the competition he faces in the quarterback room and how each quarterback is able to learn from each other. Senior Sam Noyer, who is recovering from shoulder surgery this spring, held the position in 2020 and will compete with Shrout and a talented group of freshmen led by Brendon Lewis. Freshman Drew Carter and freshman Grant Ciccarone also saw action on Friday.

“I think you have to compete with every single person out there,” Shrout said. “I think when you have a good group of guys with me, Sam (Noyer), Drew (Carter), B-Lew (Brendon Lewis), Jordan (Woolverton) and Grant (Ciccarone) that are out there competing day in and day out going to work in the meeting rooms, it’s obvious that everyone feeds off of each other.”

Shrout continued by reflecting on what he learned playing in the SEC and what he can bring to Colorado, adding that playing in the conference provided him with a valuable experience.

“I took a lot away from that experience and I think good game experience isn’t something you can’t teach or implement in practice,” Shrout said. You can mimic something similar but it’s not really the same. Having those few games that I got to play in was really awesome and it’s something that will help me out in the future.”

Colorado will complete another weekly intrasquad scrimmage on Friday.