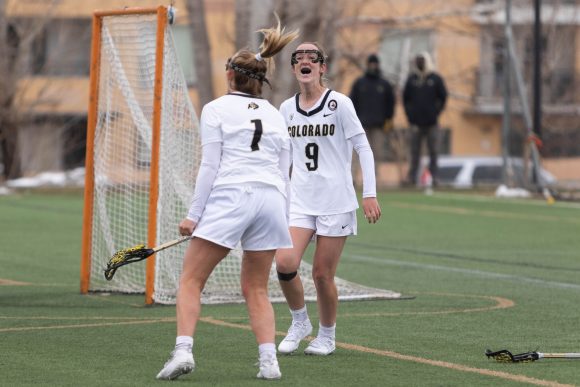 Freshman midfielder Ashley Stokes celebrates after her teammate, Charlie Rudy, scored her third goal of the game during the first half at the Kittredge Field. March 22, 2021 (Kara Wagenknecht/CU Independent)

Following an impressive comeback victory over the USC Trojans on Friday, which featured seven unanswered Buffalo goals, the University of Colorado lacrosse team looked to maintain its positive momentum on senior day against Arizona State on Sunday. In their previous matchup, the Sun Devils got the best of Buffaloes on Mar. 28 in Tempe, representative of Colorado’s struggles away from home this season.

Arizona State entered Sunday’s contest on a five-game winning streak, boasting a 7-2 overall record. Colorado looked to improve to 5-5 and finish the home portion of its regular season with a victory at Kittredge Field. CU did just that, defeating Arizona State, 15-11.

Head coach Ann Elliott Whidden spoke about the adversity the team has faced this season in light of the COVID-19 pandemic and how it has impacted team chemistry.

“I think this is a tough season for every team competing,” Whidden said following the victory. “There (are) so many things out of your control and we had a slow start and we’ve hurt ourselves a lot this season. I think our focus is on what we can control and trying to make sure we’re doing everything to take advantage of the opportunities we may get. I think our team’s responding. When we’re able to be together, we’re able to practice, we are getting some momentum and I think that’s a good thing for this group.”

The Buffaloes started fast, scoring less than two minutes into the match courtesy of junior midfielder Liz Phillips. After gaining a woman advantage, Arizona State knotted it up at one apiece following of a score from senior captain Maddie Hunter. A pair of fouls on Colorado gave the Sun Devils two quality scoring chances out of the gate, one of which was stopped by Colorado senior goalie Julia Lisella.

Free possession shots for the Buffaloes allowed CU to increase its lead to 4-1 at the 23:43 mark of the first half. Goals from junior attacker Charlie Rudy and senior attacker Sadie Grozier led to a fast start for Colorado offensively. Hunter cut the Buffaloes lead to one with a shorthanded score after a solid centering pass. Multiple point-blank scoring opportunities for Arizona State allowed the Sun Devils to tie the game at four after falling behind early.

Rudy’s go-ahead goal for the Buffaloes was wiped off because of a dangerous follow-through. Colorado and Arizona State remained tied just over halfway through the first 30 minutes. Both defenses tightened up, a pair of stops by Sun Devils’ goalie Berkeley Bonnau kept CU from gaining an advantage. Arizona State sophomore midfielder Brynn Holohan was the beneficiary of slick interior passing and scored right in front of the net to put the Sun Devils up 5-4.

A Grozier free possession goal tied the game at five late in the half. Arizona State capitalized on a woman advantage after Lisella was unable to corral the initial shot attempt. Colorado used a player advantage to take the lead just before halftime. Freshman midfielder Morgan Pence scored off an assist from junior attacker Chloe Willard. The Buffaloes led 7-6 after 30 minutes.

An aggressive play style and a plethora of fouls characterized the first half. A total of 20 were called in the first 30 minutes on both teams. Colorado came out aggressive to start the second half. Senior attacker Zoe Lawless scored her second of the contest to increase the CU lead. A free possession Sun Devil score cut the Colorado lead to two. Grozier scored her third of the match unassisted to put Colorado up 10-7.

Hunter’s third goal trimmed CU lead to a pair with just over ten minutes left in the match. CU clung to a one-point lead with less than seven minutes to play. Colorado added some much-needed cushion to their advantage when Liz Phillips fired one past the Sun Devils’ goalie.  Grozier’s and Lawless ended Arizona State’s hopes of a late comeback, adding a pair of goals to extend the CU lead to four.

Whidden talked about the importance of being able to finish the home portion of Colorado’s regular season on a high note. She said the growth in the team’s self-belief has been vital.

“Last weekend and the last couple weeks had been tough for us,” Whidden said. “So to be able to come out here and just compete and for them to step on the field with more confidence is a huge win for us. We have to keep building. We’re not playing perfect and the expectation isn’t (to play) perfect, but there (are) things we need to continue to get better at, but we’re playing hard now, we’re playing to win and that’s really what’s key.”

Whidden said carrying the confidence from the consecutive home victories will be important to replicate their success away from home.

“We just (have to) keep building off of this and our confidence,” Whidden said. “Every game we do a little bit better. We (have to) believe in ourselves a little bit more. All of our players (have) to know what they’re capable of doing.”

The Buffs will finish the regular season on the road for the final four games. CU travels to Stanford to battle the Cardinal on Friday.