Breaking: The latest updates on the King Soopers shooting in Boulder 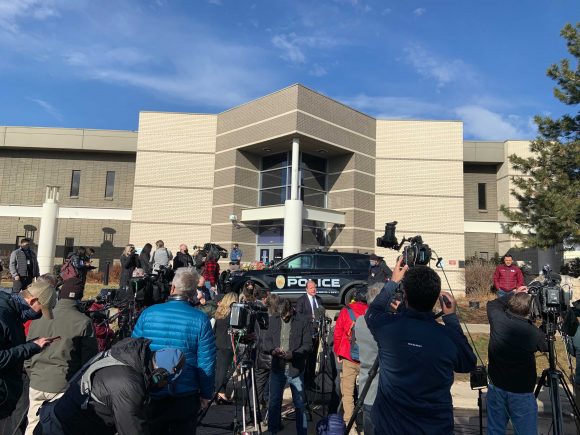 On March 23 at 8:30 am, just a few hours after a mass shooting left 10 people dead, officials from the local and federal levels met with the media to discuss details of the horrific atrocity.

Governor Polis, Congressman Joe Neguse, Police Chief Maris Herold and District Attorney Dougherty were among those who spoke at the conference.

Speaking in front of Officer Eric Talley’s patrol vehicle, the officer who was killed yesterday, they gave statements and answered questions for a little under an hour.

Herold read the names of the deceased first. Varying in age and profession, they encompass the scope of the Boulder community. However, Public Information Officer Dionne Waugh said that she wasn’t sure if the families of the victims were comfortable having their names publicized.

Officials say that they do not believe that any university students were among the dead.

Law enforcement has accused a 21-year-old man from Arvada of being the gunman and have charged this man with 10 counts of first-degree murder. Police say that they received calls of a man armed with a patrol rifle at 2:30 p.m. on Monday.

District Attorney Dougherty said that the suspect was in a hospital at the moment and is expected to be released and moved to Boulder County Jail. However, they say that it is too early to declare his motive.

Governor Polis also spoke at the conference. He called the shooting a “senseless tragedy.”

“We mourn [the victims] as a state and we mourn them as a nation,” Polis said.

Boulder’s Congressman, Joe Neguse, spoke next. He said, “this cannot be our new normal. We should be able to feel safe in our grocery stores.”

Neguse, who avidly supports gun reform, said that change was necessary to stop this from happening again.

Federal law enforcement, including representatives from the US Attorney’s Office and the FBI, also spoke. They said that the FBI was involved in the investigation due to its greater wealth of resources.

In an arrest affidavit released by the Boulder Police, investigators identified the weapons used by the shooter as an assault rifle and a handgun.

In the University of Colorado Boulder’s regularly scheduled COVID-19 Community Q&A session, the speakers turned their attention to the shooting.

Mental health and student safety were the main focus of the meeting. Officials wanted community members to know that Student Health Services are available for those who are struggling and that all regular events have been canceled for the day.

The alleged gunman will have his first court appearance on Thursday, March 25th. He was officially booked at the Boulder County Jail early Tuesday afternoon.

They said, “as CU students, it is our responsibility to not only support each other, but to support our greater Boulder community.”

The City of Boulder will hold an emergency city council meeting on Wednesday night at 6 pm. Representatives from State and Federal government will attend. It will be broadcast on the city’s Youtube channel.

The alleged gunman will have his first day in court, Thursday morning. The Boulder DA’s office said that he’ll be read his rights, but there will not be any argument for quite some time.

A procession of law enforcement vehicles will drive around Boulder and then out to U.S. 36. Boulder Police say that all vehicles are welcome to drive the route.

The city of Boulder held a town hall at 5 pm on Wednesday. The town’s Mayor, Sam Weaver, said that he wanted to rebuild the community.

“One of the milestones in my head will be when we reopen that King Soopers,” he said. On Tuesday, Weaver said that rebuilding would come after Boulder citizens had time to grieve.

The alleged shooter had his first day in court on Thursday the 25th. Just after 8 am, Boulder County Judge Mulvahill called the courtroom to order and advised the man of his rights. The defense asked that a status conference be held before any preliminary hearing, as the lawyers said they needed to assess the extent of the gunman’s “mental illness.”

Judge Mulvahill granted the request, saying that a status conference could be held in 60-90 days.

At 6:30 pm on Thursday, hundreds of Boulder residents attended a vigil put on by Mom’s Demand Action, a gun reform organization.

Representative Joe Neguse spoke at the event.“The grief we carry here in Boulder is not ours alone…it does not have to be this way,” he said.

Student activists from the area and an assistant professor at CU Boulder also spoke.

On Friday morning, Police Chief Maris Herold and District Attorney Michael Dougherty attended another press conference to discuss the details of the ongoing investigation. Officials said that 167 law enforcement officers were engaged in the investigation, representing more than 20 different agencies.