A mass shooting left 10 dead in Boulder. What do we know happened? 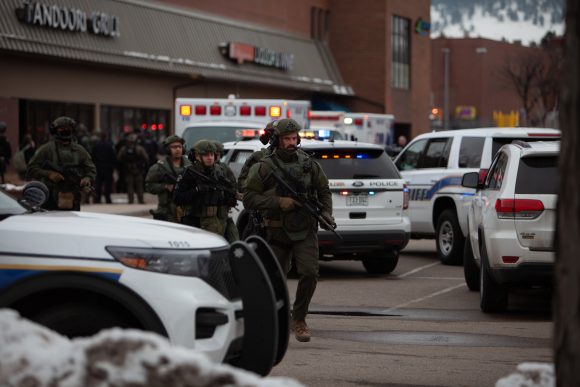 Shortly before 3 pm on Monday, March 22, gunfire broke out in a King Soopers grocery store just blocks away from the University of Colorado Boulder. What followed would leave 10 people dead, including one Boulder police officer.

At 2:30 pm, Boulder Police first heard calls that there were gunshots near the Table Mesa shopping center store and that someone had a “patrol rifle,” which is a type of weapon carried by soldiers and now, more commonly, police.

Police Officer Eric Talley was the first law enforcement officer to respond to the call. When he arrived on the scene, he was shot and killed by the perpetrator.

Boulder Police Chief Maris Herold said that Officer Talley’s actions were “heroic.” He had served with the department since 2010.

Over the next half hour, dozens of police, SWAT, state and federal law enforcement descended on the area. Vehicles provided a temporary permitter as SWAT vans deployed officers to the front door of the building and a fire engine used its ladder to put more officers onto a rooftop overlooking the scene.

Passers-by and media gathered on the median of South Broadway Street, as at least one hundred law enforcement officers arrived and moved the crowd back.

Forty-five minutes into the siege, a police cruiser used its megaphone to demand that someone leave their vehicle and put their hands on their head. Roughly around the same time, agents from the Federal Bureau of Investigation and the Bureau of Alcohol, Tobacco, Firearms and Explosives entered the area and approached the building. 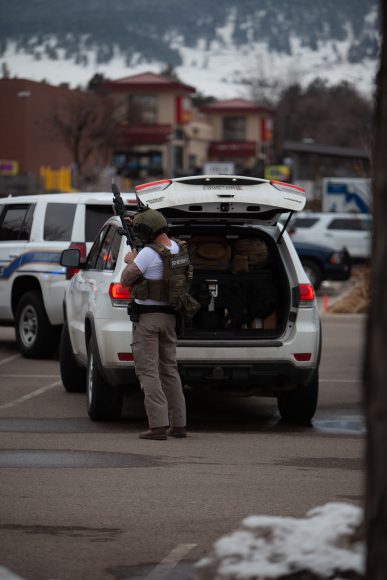 An officer chambers his rifle after driving up to the scene in a private SUV. (Alec Levy-O’Brien/CU Independent)

About a hundred yards away from the grocery store, paramedics set up several ambulances and tended to groups of people who were caught in the area when the shooter arrived. They were given blankets and moved to a different location.

Both RTD and University public buses arrived about an hour after the shooting started. At the CU Event Center, first responders set up a reunification center for victims and witnesses to meet up with families, with mental health services provided in the same area.

At 5 pm, SWAT vehicles moved to 17th and Grove St, as a report of an armed and dangerous individual. Because of this report and police activity, the university canceled all classes beginning after 5:30 pm.

In a press conference later that evening, Boulder Police said that this incident appeared to be unrelated to the King Soopers shooting.

Not much is known about how police apprehended the person they call the “alleged shooter.” However, photos taken from within the police perimeter show a shirtless man with blood running down one leg being taken away from the scene by two armed police officers. Law enforcement officials did not comment on whether or not this was the suspect they had in custody.

The names of the nine other victims have not been released to the public yet, as officials say they are still in the process of contacting the victim’s families.

Herold said that the investigation to come would take no less than five days, with more information being released as time goes on. Heads of local and Federal law enforcement said that they would do everything in their power to make sure that justice is done.

“We are going to go all out to make sure that the right result is reached,” Dougherty said.