Buffs to challenge Florida State in second round on Monday 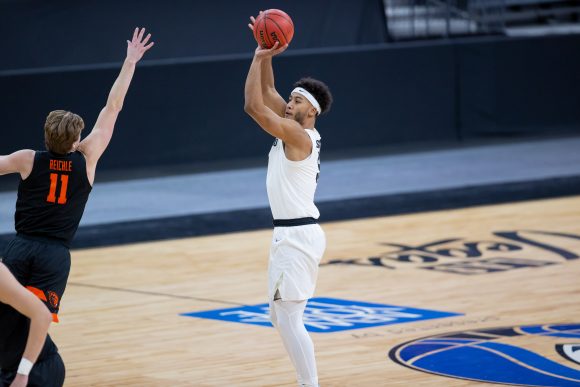 Led by historic shooting and lockdown defense, the fifth-seeded University of Colorado Buffaloes dismantled Georgetown in the first round of the NCAA men’s basketball tournament on Saturday. Up next for the Buffaloes will be a matchup against the four-seeded Florida State Seminoles.

The Seminoles took care of business against UNC Greensboro on Saturday with a 64-54 victory, advancing FSU to the round of 32 and a date with Colorado.

Unlike the Buffs 64% three-point barrage, Florida State struggled shooting threes in its first round matchup, failing to convert on nine attempts. Despite this, the Seminoles, led by junior forward RaiQuan Gray, controlled both ends of the court and to pull away late and advance in the tournament.

A matchup between the fourth-seeded Seminoles and the fifth-seeded Buffaloes is expected to be one of the more competitive and exciting contests in the East Region. Both teams placed second in their conference tournaments (FSU in the ACC) but will have to each play their own brand of basketball to succeed in the second round.

Colorado, as noted, was electrifying offensively in its round one matchup versus Georgetown. The Buffaloes, on top of their 64% shooting from three-point territory, also made 12 of their 14 free throws to regain the highest season mark (82.3%) in NCAA history going into round two.

Meanwhile, Florida State comes into Monday’s matchup averaging 78.3 points per game to lead all ACC teams. While the Seminoles’ scored just 64 points on Saturday, they were bailed out by their dominant field goal defense which led the ACC in holding opponents under 40%. The Seminoles were able to pull away late against the 13-seeded Spartans and will look to ride that late momentum into their second round matchup with Colorado.

If the Buffaloes can successfully navigate the Seminoles’ defense, they’ll advance to the Sweet 16 to take on the winner of the Michigan and LSU contest.

“We’ve been to this point 3 times: 1997, 2012 and this year of having an opportunity to advance to a Sweet 16,” said head coach Tad Boyle. “We’ve fallen short both times. Before, you have to go back a long time. You don’t get this opportunity very often, we certainly hope to have it more often.”

Colorado and Florida State will tip on Monday at 5:45 p.m. MST at Bankers Life Fieldhouse in Indianapolis.