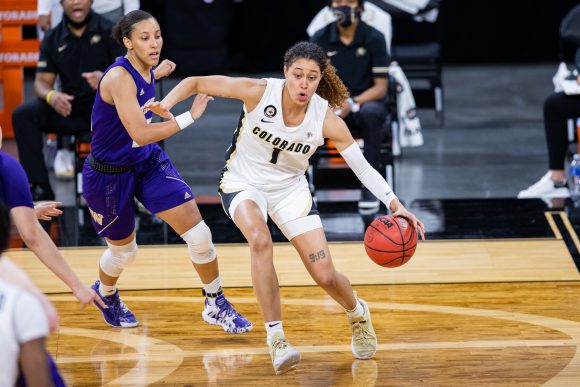 The University of Colorado women’s basketball team was left on the outside looking in on Monday night, as the Buffs witnessed 64 other schools be selected for the NCAA tournament.

Colorado (10-10, 8-8 Pac-12) however, will get an opportunity to make some noise in another postseason tournament, as they accepted an invitation to the 32-team Women’s National Invitational Tournament.

Head coach JR Payne knew her team’s chances of being included in the NCAA tournament were slim, but she kept an optimistic mindset with her players as they watched the selection show.

“There was like a sliver of hope,” Payne said. “Just allowing the disappointment to be real is  great because that’s the first time I’ve sat and actually really watched in anticipation, which is a  great thing to have a chance.”

Although CU couldn’t make the big dance, the WNIT bid marks the Buffs’ first postseason appearance since 2017 and the first for any of CU’s current players, including seniors Mya Hollingshed, Annika Jank.

“I’m excited for them (Hollingshed and Jank) to have the opportunity to play in the postseason,” Payne said. “They came here wanting to build a program and understand that it would take a lot of work,  patience and effort. It’s really neat to see that they have this opportunity.”

Colorado will join Arizona State as the two teams representing the Pac-12 in the WNIT.

CU’s first round test will be against the University of Louisiana (16-6, 13-1 Sun Belt) on Friday at 1 p.m. MST in Memphis, Tennessee. UL had the best record in the Sun Belt Conference this season at 13-1. The Ragin’ Cajuns also enjoyed a 15 game win streak from Jan. 2 to March 7.

There is a brief history between CU and UL which comprises a singular matchup in 1993 when the Buffs defeated the Ragin’ Cajuns, 73-50.

The WNIT will take place at four separate locations: Fort Worth, Texas, Charlotte, North Carolina, Memphis, Tennessee and Rockford, Illinois. The championship game will be held on March 28 in Memphis.

Colorado will look to improve upon an all-time record of 14-5 in the NIT. If the Buffs can outlast the Ragin’ Cajuns, they will play the winner of the University of Tennessee Martin (20-5) and Nebraska (12-12) game.