CU rallies from early 2-0 deficit to stun No. 14 USC in double overtime 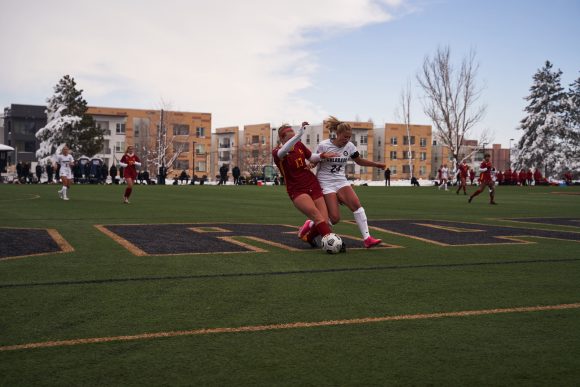 While the University of Colorado student body enjoyed a snow day on Monday, the CU soccer team took to the field to play the No. 14 University of Southern California Trojans. With the heavy snow that Boulder received this weekend, the game was moved from Sunday afternoon at Prentup Field to Monday afternoon at Kittredge Field. The game was worth the additional one day wait as the Buffs rallied from an early 2-0 deficit to beat the Trojans, 3-2, on a goal by freshman forward Shyra James in double overtime. The win lifted CU’s record to 5-3-1 overall and 2-2-1 in the Pac-12.

At times this season the Buffs have struggled to get in a rhythm early in games. That wasn’t true on Monday as the Buffs opened the game aggressively. In the seventh minute, James fired a shot towards the left corner of the goal, but the ball was blocked away by USC goalkeeper Kaylie Collins.

Despite the strong start, CU suffered what could only be described as a tough break in the eleventh minute of the game. A very low corner kick by USC midfielder Madeline Vergura deflected off the foot of forward Tara McKeown and floated into the goal to give USC a 1-0 lead.

Only a few minutes later, USC struck again as Vergura kicked a crossing pass from the far-right side of the field and connected with forward Penelope Hocking who banged the ball off her chest and into the goal. Now only 13 minutes into the game, CU trailed 2-0 to the Trojans.

For a brief stretch following USC’s second goal, it felt like the Buffs might have lost their early game momentum. However, the Buffs didn’t give in and continued to press USC offensively. 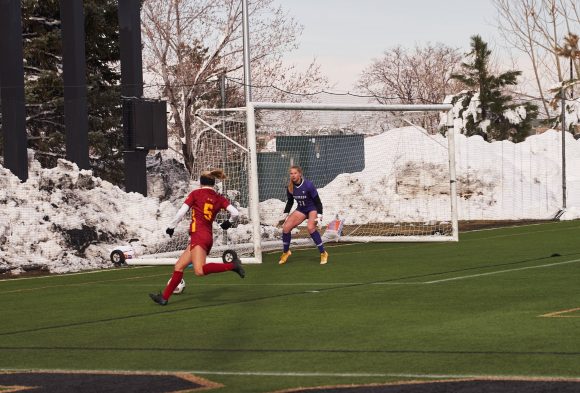 USCs Penelope Hocking goes in for the shot on March 15, 2021 (Jackson Fox-Bland/CU Independent)

In minute 21, the Buffs effort got a result when a long ball from freshman defender Lawson Willis hit junior forward Libby Geraghty in stride downfield. Geraghty, with only the goalkeeper to beat, kicked a ball towards the goal but it was knocked down by Collins. The loose ball deflected right back to Geraghty who wouldn’t miss twice. This time Geraghty kicked the ball around the goalkeeper to cut the Trojan lead to one.

“To go down 2-0 to the fourteenth ranked team in the country we could have hung heads,” said head coach Danny Sanchez. “But obviously Libby (Geraghty) getting that goal about halfway through the first half really gave us confidence going forward. It was one of those games that could have gone either way.”

The Buffs’ strong attack continued the rest of the half, but CU would have to wait until the second half to get the equalizer. That moment came in minute 56 when senior midfielder Shanade Hopcroft was knocked down in the box and awarded a penalty kick.

A silence blanketed the field as Hopcroft lined up for the kick. Hopcroft took a moment, set up and, with a running stride, drilled the ball to the high right corner of the goal. Collins made the wrong guess as she dove in the opposite direction. As the ball entered the net untouched, the CU bench and the limited fans and family in attendance erupted with cheers. Cheers that in a normal year, may have been deafening. Despite the early troubles, CU tied the game with 35 still minutes still to play.

For the remainder of the second half, the Buffs and the Trojans battled back and forth. Both teams had scoring chances, but neither side was able to score as the game headed to overtime tied at two.

Five minutes into overtime CU made what could have been a potentially costly mistake. A foul was called against CU in the box and USC was awarded a penalty kick.

Once again, the field became quiet for a penalty kick. If USC scored on the penalty kick, the game would be over; if USC missed, CU would survive for at least a few more minutes. With the weight of the game on her shoulders, USC midfielder Savannah DeMelo fired the penalty kick towards the left part of the goal. Sophomore goalkeeper Dani Hansen read it perfectly and slid over to knock the shot down to keep the game tied. The clutch save was similar to another penalty kick she blocked on Feb. 26 to keep the Buffs in a draw against Washington.

“(Hansen) really came up big with the penalty in overtime,” Sanchez said. “Great reaction (and) great anticipation. She really managed the game, and she dealt with what she needed to in the box. (USC) is one of the top 2-3 forward combinations in the country and for the most part, we did a good job with them.”

The game would go to double overtime and as time ticked away, it started to seem likely that the Buffs would have to settle for a draw. However, 109 minutes in, Willis kicked the ball from the right-side field and found James in the middle of the field. James bounced the ball off her body, spun herself around and, while falling to the ground, sliced a shot to the far-left part of the goal. Collins tried to block the ball but it was too late. The ball had already gone in the goal. 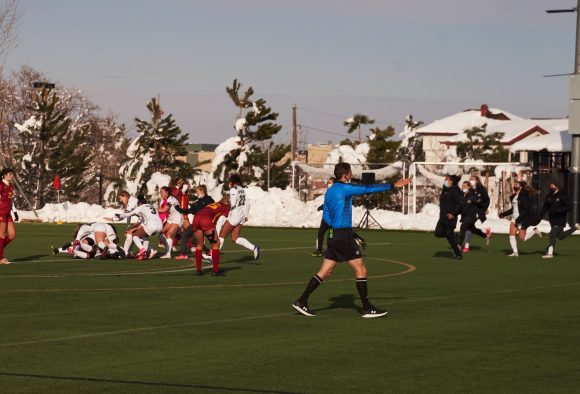 Buffs celebrate as the ref calls the game after the second round of overtime game-winning shot on March 15, 2021 (Jackson Fox-Bland/CU Independent)

Colorado players sprinted towards James and collapsed onto her forming a dogpile as the team celebrated the 3-2 comeback win.

“It was a great finish,” Sanchez said. “We needed something like that to beat her (the USC goalkeeper, Collins) and Shyra (James) fortunately did that for us in the second overtime.”

On top of being a great win for the team, the Buffs victory also marked the one-hundredth win of Sanchez’s nine-year career at CU.

The Buffs will look to build more momentum in their next game at Utah on Saturday at 11:30 a.m. MST. 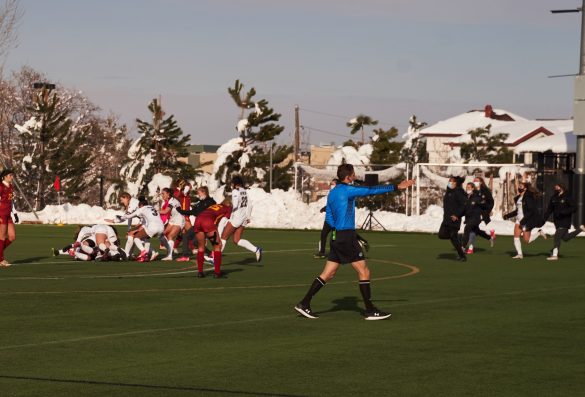 Buffs celebrate as the ref calls the game after the second round of overtimes game-winning shot on March 15, 2021 (Jackson Fox-Bland/CU Independent) 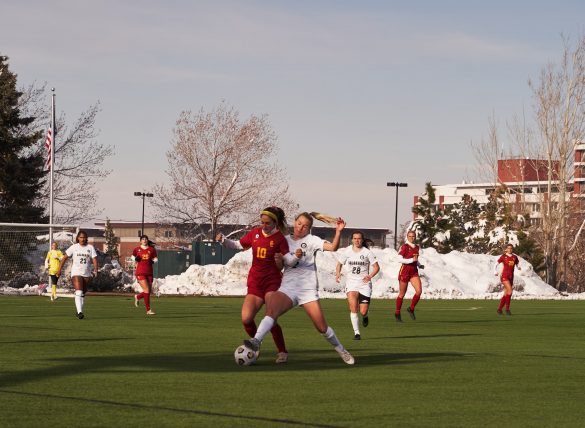 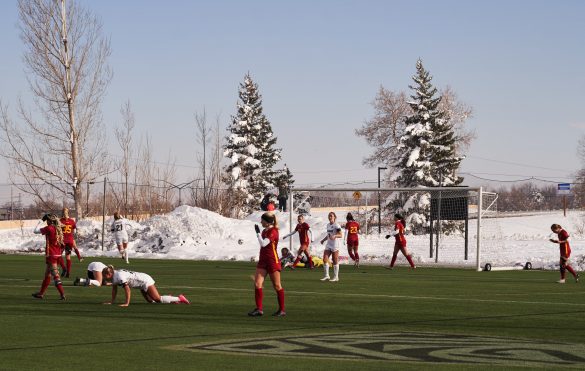 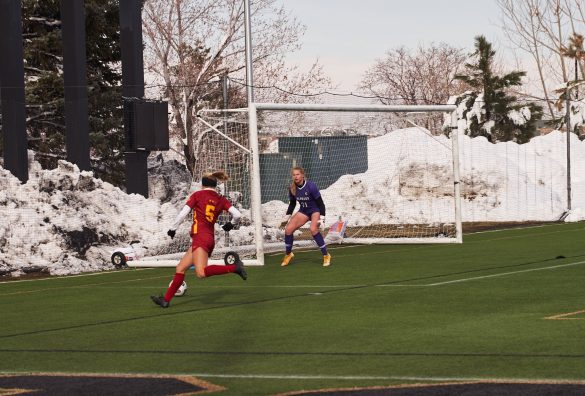 USC's Penelope Hocking goes in for the shot on March 15, 2021 (Jackson Fox-Bland/CU Independent) 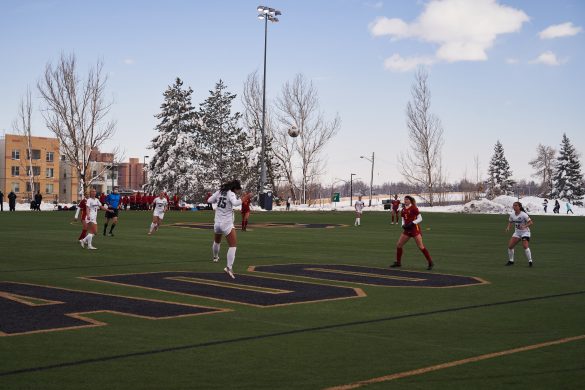