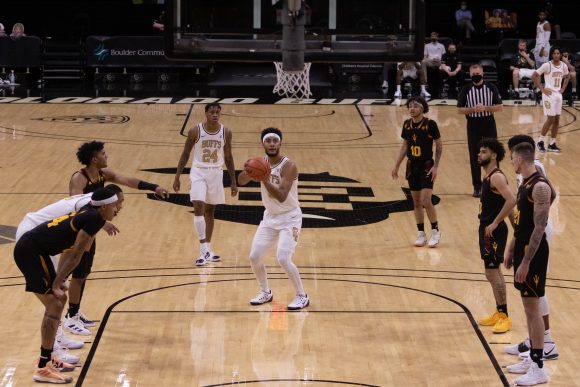 Senior forward D’Shawn Schwartz prepares for a free throw after getting fouled by Arizona State during the first half at the CU Events Center. March 4, 2021 (Kara Wagenknecht/CU Independent)

The University of Colorado Buffaloes men’s basketball team comes into this year’s Pac-12 tournament with every expectation that winning the whole thing is a real possibility. Currently ranked No. 23 in the AP Top-25 poll, CU is among the country’s top teams. Finishing the regular season at 20-7 overall and 14-6 in the Pac-12, the Buffs secured the No. 3 seed and a first round bye for the conference tournament with the most conference wins in team history.

Colorado will open on Thursday at 9:30 p.m. MST on ESPN against the winner of Wednesday’s matchup between the 11 and six-seed, California and Stanford. If the Buffs win on Thursday, they will go to the semifinals on Friday. The Pac-12 championship game will then be on Saturday. All games are hosted at the T-Mobile Arena in Las Vegas.

Colorado should be well-rested before its first game as it will have been exactly a week since the Buffs last played due to them gaining a first-round bye. Coming into the postseason, Colorado is riding a four-game winning streak and is looking to continue that momentum in the conference tournament and further into March.

After the final regular-season game against Arizona State on March 4, head coach Tad Boyle provided his mindset with the conference and NCAA tournaments looming.

“There are four seasons in college basketball,” Boyle said. “You have the non-conference portion, the conference portion- which this year was 20 games for the first time, now, we go into season number three, which is always the PAC-12 tournament. Then beyond that is season number four, the NCAA Tournament. It’s win or go home in both of these next two seasons. There’s no tomorrow’s… there’s no bounce backs. It’s win or go home.”

Boyle’s mindset reiterates that the Buffs are only guaranteed one game at a time and must approach each game with the mentality that this might be it.

CU’s leader and first team All-Pac-12 senior point guard McKinley Wright IV offered his insights on the team’s performance going into March and how focused they need to be during the week before the postseason begins.

“I feel like we’re on the horizon at the right time,” Wright said. “This is March. We are going to be playing the best teams later this month. And we’re one of those better teams.”

Boyle agreed with Wright’s sentiment that the team is peaking at the right time and keeping the mindset of winning one game at a time.

“This group wants to win,” Boyle said. “They’re interested in winning, they care about each other, and we have the ability to do that. But it doesn’t come easy in March.”

If Colorado continues to play and prepare this way, its season will extend throughout March and the NCAA Tournament.