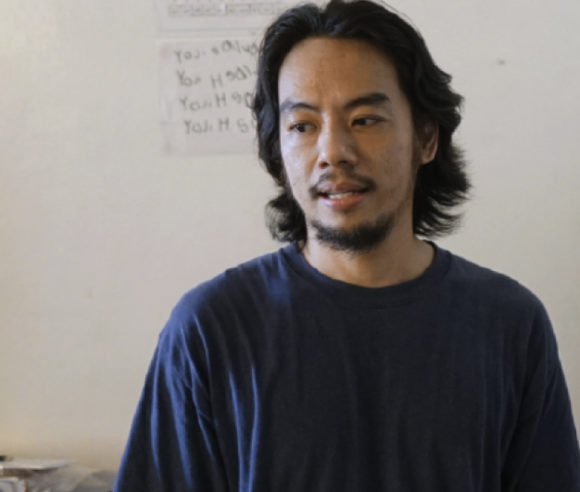 Visual artist Mark Salvatus led a virtual lecture on March 2, hosted by the University of Colorado Boulder Arts and Art History Program. The lecture focused on his personal artwork, which addresses themes of movement, cultures and the world through a mixed media approach.

Salvatus grew up in Lucban, a small farming town in the Philippines. He gained early exposure to art at the town’s Pahiyas Festival, a traditional celebration honoring the harvest. During the festival, houses are adorned in vibrant collections of fruits, vegetables, and other found materials, creating beautiful communal art installations.

“Since my hometown didn’t have museums or galleries when I was growing up, this was my first exposure to art,” Salvatus saod. “Objects put together and installed temporarily, incorporating lived experience, local materials, and so on.”

Salvatus began his own art practice as a street artist in Manila, a densely populated city in the Philippines. As a street artist Salvatus created a number of projects that played with ideas of community and imprint.

One project, Haiku is pieced together unknown street artist tags from around the city that are projected side by side and creating messages between strangers.

Another work, entitled Wrapped, was a communal project where passersby could leave imprints of their belongings on the wall as pencil drawings.

“It was a way of revealing our contemporary way of life through traces of objects, but as temporary as pencil drawings on a wall,” Salvatus said. “Using belongings to figure out, ‘Where do we belong?’”

Salvatus also began creating installations in museums and galleries. These works, as well as his street art, explored contradiction and complication, placing contrasting stories and concepts side by side. His works addressed many themes from security and insecurity to community and division. Salvatus uses a range of mediums, including found objects, photography, videography and collage. Salvatus challenges the notion of permanency, allowing for more movement and flexibility in his works.

“Maybe art is the idea of not being fixed or permanent. I can create something that changes on its own and that’s organic,” Salvatus said. “The works construct themselves.”

Along with impermanence, Salvatus works with themes of travel and movement. By using photography and found objects from family members, Salvatus uses archives as echoes of the past and allows viewers to make their own interpretations of those histories.

In one of his most recent projects, Salvatus made the most of his time in quarantine to create an interactive installation project with his son. Each day Salvatus would create sculptures made of found objects in his home, letting his son, Yoji, judge which pieces he liked or disliked.

The objects were assembled only for a day, creating an evolving project and mirroring the restlessness and rapid change of the Covid-19 pandemic.

When asked about advice for aspiring artists, Salvatus urged students to reconnect with their roots, and tune in to their immediate environment.

“The environment shapes the artist as a person. It’s crucial for the artist to be aware of where they are standing and connected to,” commented Salvatus.

Currently, Salvatus is creating a new work to be featured in a group exhibition which will focus on the concept of land and spirit.