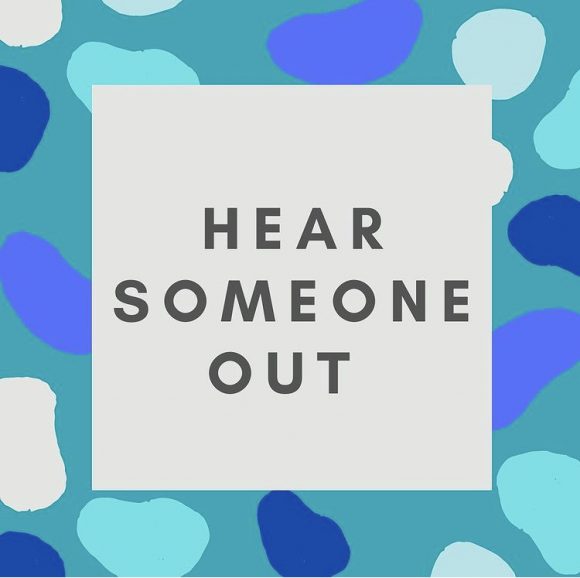 Hear someone out campaign. (Courtesy of hearsomeoneout Instagram page)

Buffs for Civility members recently launched “Hear Someone Out,” a campaign promoting civil discourse both online and in person. The campaign is designed to address the current issue of incivility, through social media outreach and a signable pledge.

The students leading “Hear Someone Out” are participants of the Bateman Case Study Competition, where students are tasked with creating and carrying out public relations campaigns.

The competition occurs yearly, with over 75 teams involved from across the nation. Boulder’s team is made up of four senior students; Helena Regan, Henry Collins, Peyton Miller and Alicia Whitman.  This year, the desired outcome of the Bateman Competition is to position the public relations profession as a resource for civility.

In recent years, conversations have been filled with tension and disagreement, with no clear voices being heard. A press release from earlier this month by Buffs for Civility noted that currently, over 90 percent of Americans view incivility as a problem, and 73 percent of people believe that the issue has led to political stalemates.

Although these conversations may feel minor in the grand scheme of things, they have ultimately led to increased tension and decreased innovation. Workplaces and classrooms have quieted; severely lacking team spirit, creativity and efficiency.

Buffs for Civility noticed the lack of respectful conversations and their negative impacts and decided to take action.

“Our mission is to stop the shouting matches people are having at their dinner tables, workplace or school, and provide people with resources to have civil discourse,” Buffs for Civility member Henry Collins said. “This means not cutting people out of your life for having opposing views, but instead reaching a mutual ground with others by being understanding and empathetic.”

The “Hear Someone Out” campaign is an interactive effort geared towards both immediate and broader communities. One aspect of the campaign is a signable petition, which urges people to hold more civil conversations, pursuing empathy, respect and understanding.

The group has already surpassed its goal of 100 signatures by reaching over 250 pledges on their website. The second aspect of their campaign is engagement through social media platforms.

“We chose TikTok, Instagram and Twitter because we feel these platforms are the best opportunity to reach people online,” said group member Helena Regan. “As we are in a pandemic, it’s hard to reach people in person, which is why we felt like our social media platforms had to be a strong foundation for our campaign.”

Not only has the campaign been successful, but group members have learned valuable lessons and made priceless memories.

“It’s dramatically enriched our public relations experience to create a campaign from start to finish, something most people don’t get to do until their first job out of college,” Buffs for Civility member Alicia Whitman commented. “Our team has also had a lot of fun moments, even just in the little things like spending time together, posting flyers, or having discussions.”

“We have such a great group that has been able to laugh and make the best of any situation. We’ve also worked hard to come up with an idea that we are all confident in, and we are so happy to share that with others,” said group member Peyton Miller.

The “Hear Someone Out” campaign will continue throughout the semester, and decisions will be made about competition winners by April 15, 2021.

Bailey Diamond is a freshman at CU Boulder, majoring in journalism and minoring in studio art. She spends her free time running, hiking, playing acoustic guitar, and drinking countless cups of coffee. Check out her blog, linked below!