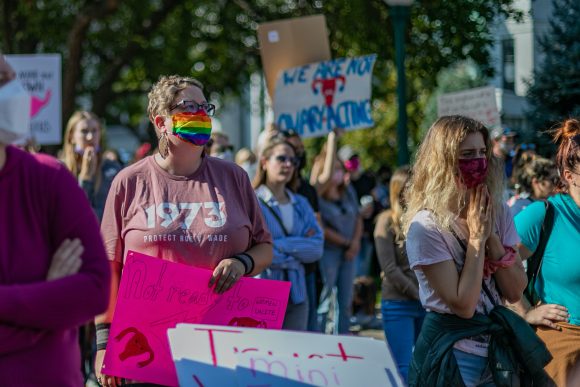 On Friday, June 24, the Supreme Court overturned Roe v. Wade in a 6-3 decision with a full conservative majority. This decision waives protection for abortion rights and will likely lead to abortion bans across almost half the country.

Justice Samuel Alito wrote the majority opinion for the court. Instead of banning abortion after 15 weeks, which had been previously rumored to be the court’s decision, the court has ended federal abortion protections entirely. The landmark decision will lead to anti-abortion “trigger laws” in 13 states, which will restrict or ban abortion within the next 30 days. 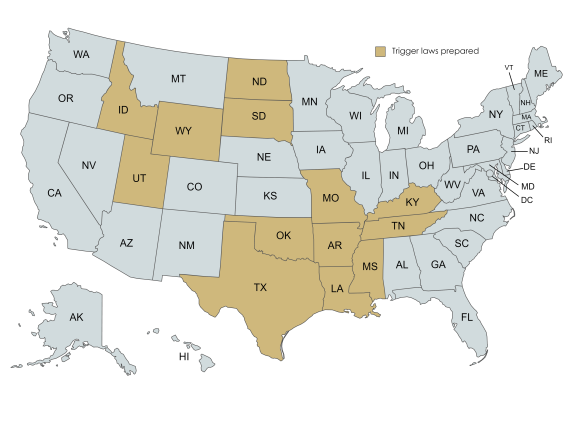 States that have anti-abortion “trigger laws” in place. These laws would ban abortions within the states. Made using data from the Guttmacher Institute.

“It is time to heed the Constitution and return the issue of abortion to the people’s elected representatives,” Justice Alito wrote in the majority opinion.

“The constitutional regime we enter today erases the woman’s interest and recognizes only the State’s,” they wrote.

Gov. Jared Polis signed the Reproductive Health Equity Act into law in early April of this year, which codifies the right to an abortion in Colorado. It included protection for birth control access and said that fetuses, embryos and fertilized eggs do not have independent rights.

This means that Colorado is unlikely to ban abortion in the near future.

However, Colorado is surrounded by states with trigger laws in places, including Wyoming, Utah and Oklahoma. Abortion providers expect a large influx of patients from these states.

“We’ll be seeing probably a pretty significant increase in patients,” said Neta Meltzer, the regional director for Planned Parenthood of the Rocky Mountains.

Meltzer said that other states’ abortion restrictions have set a president for this expectation.

“We saw it last year in 2021 when the government of Texas said that abortion was not essential,” she said, referencing the six-week abortion ban that took effect in Texas in September.

Increased demand for abortions in Colorado is expected to lead to more pregnancies carried to term against the pregnant person’s will. There is also a concern for a rise in self-induced abortions by untrained citizens in uncontrolled environments.

Dr. Warren Hern founded Colorado’s first abortion clinic in 1973 and provides abortion services today at the Boulder Abortion Clinic. He warned against those dangerous practices and said that the safest place to get an abortion is at a clinic — though that is easier said than done.

“The woman who has no bus fare, who has kids to take care of at home, who has a day job… she can’t travel,” he said. “The effect of [overturning Roe v. Wade] is on poor women and minority women who have less access to healthcare in general.”

Hern also said he was concerned by a lack of providers who can perform late-term abortions, saying that it’s not a surgical practice widely taught and he struggles to take on students because of the small size of his clinic.

CU Boulder Professor of Law Jennifer Hendricks and Associate Professor of Law Scott Skinner-Thompson said the future of abortions in Colorado is complicated and there is a risk to Americans’ right to privacy after the overturn of Roe v. Wade.

“What if Texas tries to make it a crime to help someone from Texas get an abortion even in Colorado and starts issuing extradition requests for people in Colorado?” said Hendricks. “There are really complicated and scary issues for many people there, and the solution to that… needs to come from Congress,”

Friday’s decision has ramifications for other rights many Americans rely on, which in this case, applies to the right to privacy. The court’s decision puts cases like Lawrence v. Texas, Griswold v. Connecticut and Obergefell v. Hobbes into question.

“It’s a dramatic departure from the way the court has been approaching fundamental rights for at least the last 60 years,” said Skinner-Thompson.

While Colorado is likely to keep its protections for abortion rights, there are still roadblocks in place. Without insurance, the cost of an abortion ranges from roughly $500 to $1,200 depending on the stage of pregnancy and the healthcare provider.

Additionally, those providers are at risk of anti-abortion violence.  Hern works behind a bulletproof vest, bulletproof windows and front desk security at the Boulder Health Clinic for protection.

“The Republican party has been on this for 45 years, and so this is what they’ve been planning to do,” said Hern. “The election of Trump sealed the fate of Roe v. Wade.”

In response to the Supreme Court decision, CU Boulder Chancellor Philip DiStefano released a statement detailing how the university plans to address the concern over the future of democracy. The statement referenced a webinar on gun violence scheduled for June 28 and a proposed Common Curriculum that will prepare undergraduate students for engaging with a “diverse democracy.”

“Sustaining and supporting a healthy democracy through civil discourse and debate is a theme that I plan to focus on intensely this upcoming academic year,” said DiStefano in the statement.

Isabella Hammond is majoring in journalism while minoring in Spanish and communication at CU Boulder. She enjoys covering relevant news in the Boulder and university community. This is her first semester with the CU Independent.