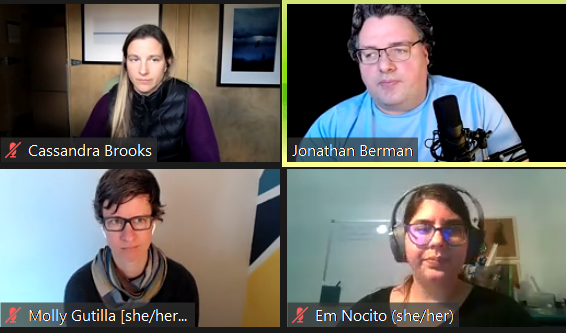 A virtual panel of scientists gathered on Feb. 24 to answer some of the most commonly asked questions about science advocacy in an event hosted by the University of Colorado’s graduate school.

Hosted by Em Nocito, Graduate Liaison for the Natural Sciences and doctoral student in environmental studies, panelists Dr. Cassandra Brooks of the environmental studies program at the University of Colorado Boulder, Dr. Molly Gutilla of School of Public Health at CSU and Dr. Jonathan Berman of the New York Institute of Technology (Arkansas campus) each voiced their opinions on the importance of science advocacy.

“The most important thing is to not wait for permission,” Berman said, answering the most asked question of how to get involved in advocacy.

The other panelists agreed with this statement, also emphasizing the importance of finding topics that you are not only passionate about but also comfortable advocating for. Advocacy can occur via protests, writing or even posting on social media.

Unfortunately, advocacy for science can also have some negatives that are “just a reality of the world we are living in,” Gutilla said.

When advocating for science of any kind (including vaccines, public health, environmental policy, or female representation in science), retribution can occur. However, each of the panelists mentioned that while retribution is something on their minds, it is not the main focus of their day-to-day work.

“We are advocating as scientists for science-based things, it’s not as if we are advocating for something that there is no evidence for,” Brooks said, showing the trust in her work when it comes to advocacy and the possibility of retribution.

“Have big ears, an open heart, and thick skin as an advocate,” Gutilla said, responding to the question of how to communicate effectively and gain trust within the public.

Each of the panelists mentioned how listening to people is the best way to communicate with them. By listening they can learn what type of language to use, the level of detail needed in the explanation, as well as actually gaining the trust of the audience by hearing their stories.

“Communication can and should be a two-way street,” Gutilla said.

The panelists concluded with a catch-all statement about the aspect of science advocacy that they wish the public knew about the most.

“Scientists are people in your community,” Berman said, “Come talk to us.”

“Science is a process, not a final product,” Gutilla said.

“Scientists are humans too,” Brooks said.