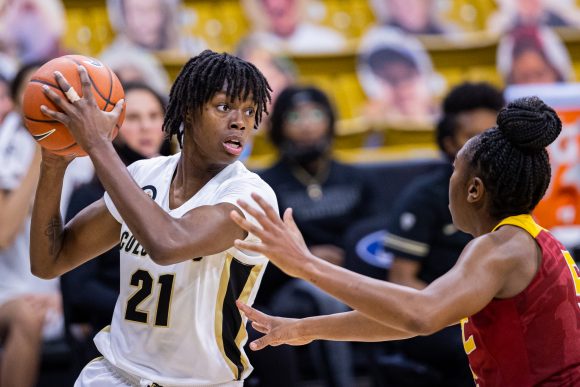 The 2020-21 University of Colorado women’s basketball season has been a roller coaster with multiple COVID-19 postponements, nail-biting losses and a historic win. With such a young team (10 underclassmen), CU’s seniors, forwards’ Mya Hollingshed and Annika Jank, have provided sparks on and off the court this year and throughout their Colorado careers.

With the NCAA granting an extra year of eligibility because of the COVID-19 pandemic, there is a chance that at least one of these seniors will return for another season; although neither has made a decision public yet.

Hollingshed has flourished throughout her three-plus seasons in Boulder. She perhaps became a star in her junior season when she earned the team’s offensive MVP and was an All-Pac-12 honorable mention. Each season she has shown growth by significantly increasing her scoring output and rebounding production. She is averaging 16.4 points and 8.7 rebounds per game this year, including scoring her 1,000th point against Washington on New Year’s Day.

When asked about her noteworthy milestone after the game, Hollingshed gave all the credit to her peers.

“It’s all thanks to my teammates and coaches for trusting me to score the ball and getting the ball to me,” she said. “I’m just really proud of where I’ve come and just this whole program.”

As for her leadership skills, Hollingshed has been quite the mentor for many younger players such as sophomore guard Jaylyn Sherrod. Sherrod was quick to state the importance of Hollingshed’s contributions to the program, especially this season.

“Mya is amazing,” Sherrod said following CU’s upset win over No. 1 Stanford in mid-January. “She is like an older sister to me. She should get her recognition way before this, but today you know who Mya is. She deserves this moment completely. Every day in practice, she comes and works hard. It was no surprise to us. Mya just did what Mya does.”

Head coach JR Payne also spoke about Hollingshed’s work ethic that culminated in a career-high 32-point performance against the top-ranked team in the country.

“I don’t think there are too many players that put up 32 against Stanford because they are so good defensively,” Payne said. “Mya is a testament to what it looks like to work. She came in as a freshman and didn’t have that skill set. She just didn’t, and she’d be the first to admit it. But she’s worked incredibly hard.”

Jank arrived in Boulder the same year as Hollingshed and despite not playing a high-number of minutes this season, she has had some memorable moments during her four years at Colorado.

One of her most significant feats came following her freshman season when she was named a Pac-12 All-Freshman honorable mention. That same season, she recorded four double-doubles and scored a career-high 26 points in December 2017 against Dartmouth. Even though the past two seasons have seen her minutes slip away, she wants to make the most out of the games she has left.

“I’m really excited for this year, regardless of what happens if I get a fifth year or not,” said Jank, who has scored over 500 points at CU. “I’ve been here for a while and so why not have a good season and why not play my heart out, because who knows what the future will hold.”

Being the only two seniors on the team, both Hollingshed and Jank have offered a veteran presence with such a young team.  If this truly is their last dance, their accomplishments speak for themselves in the mark they left on CU basketball. The Buffs will need their senior leadership to finish the season strong and make a run in the Pac-12 tournament and possibly beyond.

Colorado will close out the regular season with a trio of road games against Washington State on Friday, Washington on Sunday and Utah on Feb. 28. The Pac-12 tournament will begin on March 4.