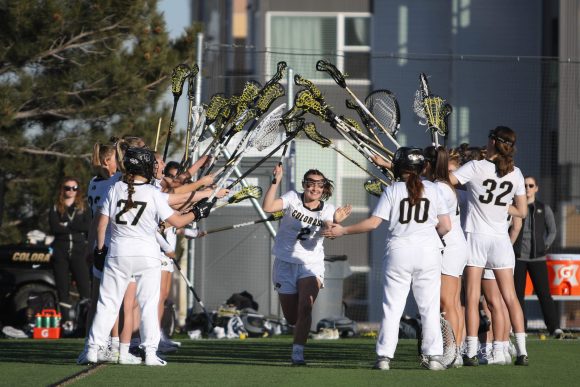 Junior defender Macaul Mellor runs through the tunnel as she gets announced before the game at the Kittredge Field. Feb. 21, 2020 (Kara Wagenknecht/CU Independent)

Last year, CU finished with a 3-2 record including a win over Oregon in Pac-12 play before the COVID-19 pandemic halted their season. Despite playing in only five games, the Buffs outscored their opponents 66-51. Colorado’s 1-0 conference record put them in second place for the second consecutive year after topping the Pac-12 standings in the 2018 season.

USC, Denver and Stanford could be three of the more difficult opponents for the Buffs. USC was voted to finish first along with the Buffs in the Pac-12 Preseason Coaches Poll while Denver ended 2020 at 7-1 and was picked to finish first in the Big East’s Preseason Coaches Poll. Stanford was close behind CU and USC with a projected third-place finish in the Pac-12. The Buffaloes will play each of these teams twice.

Colorado turns to many returning players on the roster to help bolster their overall record in hopes to finish first in the Pac-12. At the goalkeeper position, senior Julia Lisella recorded 46 of the team’s 47 total saves their team recorded last season. Junior attacker Charlie Rudy looks to pick up where she left off last season as she led the Buffaloes in points with 24. Alongside Rudy, junior attacker Chloe Willard is another threat as she was second on the team in points and assists with 16 and six respectively last season.

Head coach Ann Elliot Whidden was hired in 2012 prior to CU’s inaugural season in 2014 and she returns for her eighth season at the helm. In that time span, CU has won 66% of its games for a record of 79-40. Also returning to the coaching staff for his fourth year is assistant Mitch Fenton who specializes in coaching the team’s goalkeepers. Lastly, assistant coach Nicole Levy returns for her second season as she looks to gain more experience after a shortened 2020 campaign.

Colorado will open its season at Louisville on Thursday at 1 p.m. MST.