Colorado comes back to top Trojans 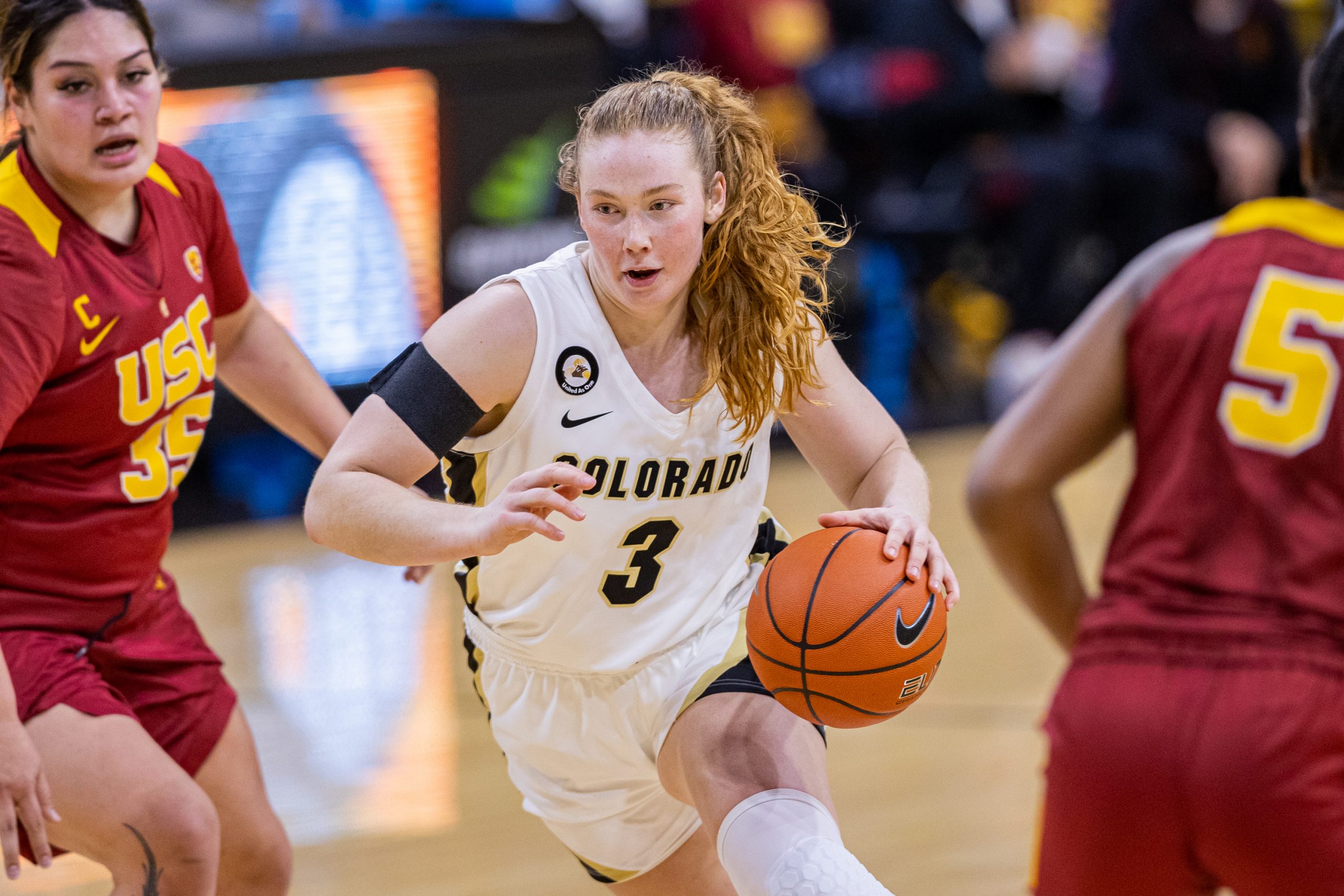 Freshman guard Frida Formann drives the ball toward the basket during the third quarter of play at the CU Events Center. Feb. 12, 2021 (Nigel Amstock/CU Independent)

Following a split on their road trip to the California schools, the University of Colorado women’s basketball team hosted the University of Southern California at the CU Events Center in Boulder. After a victory over the winless Cal Bears in Berkeley, Colorado faced a tougher test Friday night. The Buffs downed USC 66-56 after a back and forth battle, before pulling away late in the final frame.

Head coach JR Payne acknowledged her team’s ability to counter the Trojans attack after a slow start to begin the contest.

“I’m really, really proud of how we responded because we were not playing very well,” Payne said. “It just continues to show how our group is maturing as we go.”

USC forced five Colorado turnovers in the opening quarter. Carelessness with the ball led to an onslaught from the Trojans. They finished the first quarter on a 15-2 run over the last five minutes. A large chunk of the USC attack came from the perimeter. Twelve of the Trojans’ 21 first-quarter points came from the deep ball. Redshirt sophomore guard Shalexxus Aaron knocked down her third three of the context to give USC a 24-12 lead with just over eight minutes left in the half.

Colorado’s zone defense forced a pair of Trojan turnovers. A mid-range jump shot from senior forward Mya Hollingshed trimmed the USC lead to single digits. CU got within eight multiple times, but the Trojans seemed to always have a response. Late in the second quarter, freshman guard Frida Formann knocked down a three to trim the lead to five. The Buffs zone forced another turnover with less than a minute, resulting in a breakaway layup from junior guard Lesila Finau. Colorado finished the half on a 12-2 run and trailed by just three after 20 minutes. 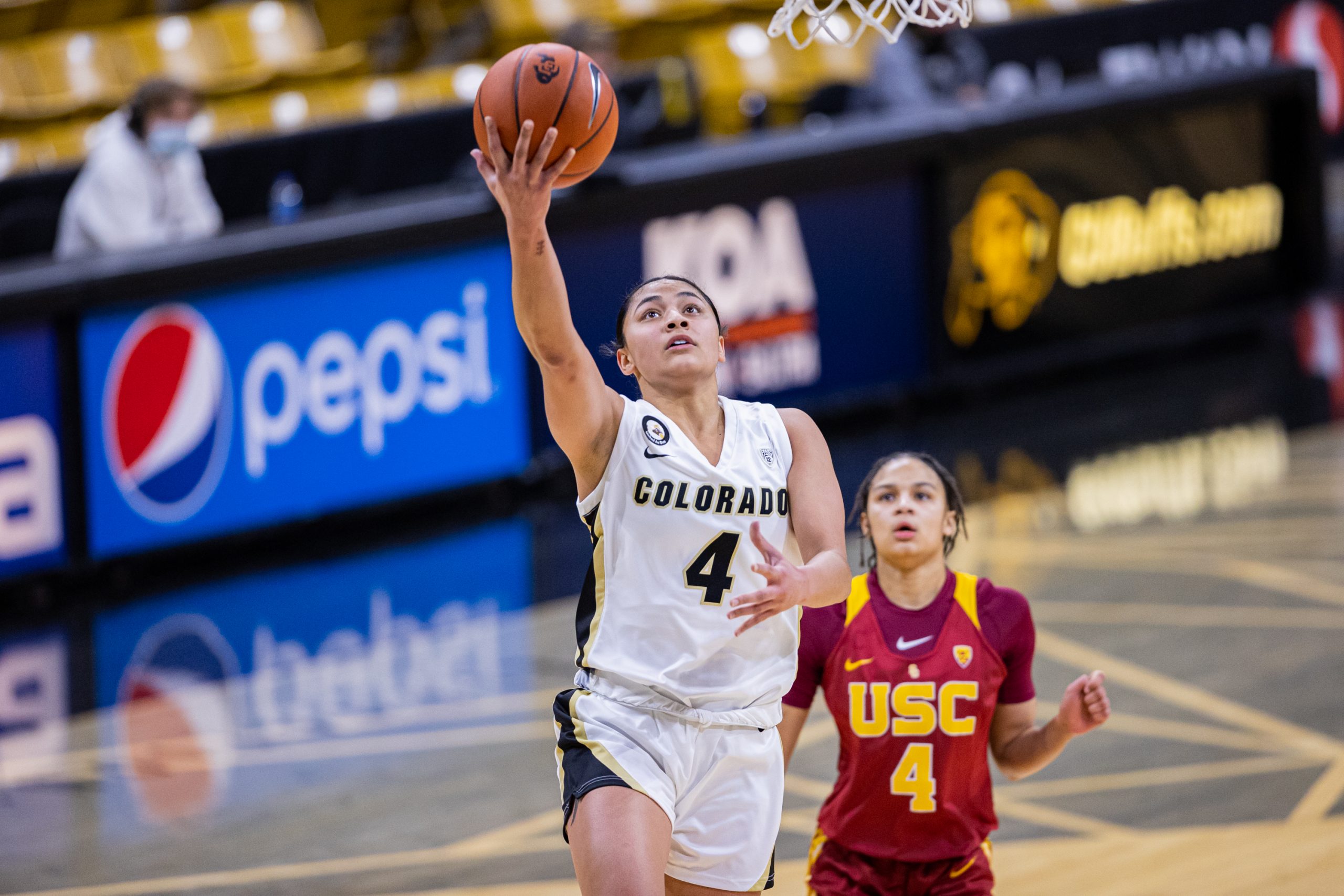 Junior guard Lesila Finau elevates the ball toward the basket during the third quarter of play at the CU Events Center. Feb. 12, 2021 (Nigel Amstock/CU Independent)

Although the field goal percentage won’t jump off the page, Finau finished the game with eight points, eight rebounds and four assists, while recording just a single turnover. The Dublin, California native appears to be settling into her role in place of the injured freshman point guard, Jaylyn Sherrod.

“I just know when I play fast I don’t play well,” Finau said. “They weren’t really pressuring me, so that gave me the time to just settle, slow things down when people are tired, when I’m tired. So, we got our offensive together.”

Turnovers and missed field goals summarized the early going in the second half. The Trojans scored the first five points of the half to extend their lead to eight. Back-to-back threes from Formann forced a USC timeout. Colorado trailed by just two with less than four minutes to play in the third quarter. An and one finish from Finau tied the game at 45. CU hit on six of its last eight attempts from the field to end the period. USC and Colorado headed into the final ten minutes tied at 47.

A pair of free throws and layup from Hollingshed put CU up four to begin the final quarter. The senior from Houston, Texas helped close the game out for the Buffaloes. Hollingshed finished with a game-high 18 and Colorado defeated USC 66-56.

“We kind of stuck with the zone a little bit more,” Payne said. “I thought we did a great job of contesting shots. They had some that kind of went in and out and we just were covering a lot of ground.”

Next up, Colorado will close out the home portion of their regular season on Sunday, hosting No. 8 UCLA for senior day. Tip-off is set for 12 p.m. MST against the Bruins. 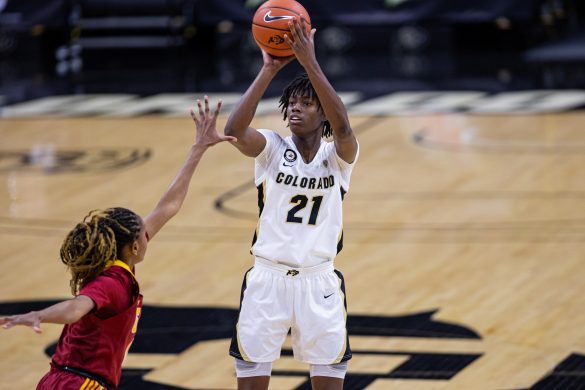 Senior forward Mya Hollingshed shoots the ball over a USC defender during the first quarter of play at the CU Events Center. Feb. 12, 2021 (Nigel Amstock/CU Independent) 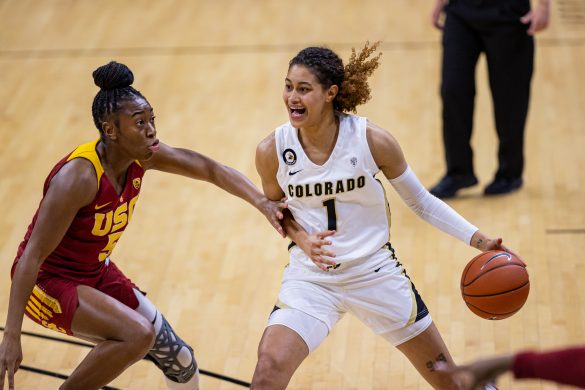 Junior guard Tayanna Jones drives the ball toward the basket during the second quarter of play at the CU Events Center. Feb. 12, 2021 (Nigel Amstock/CU Independent) 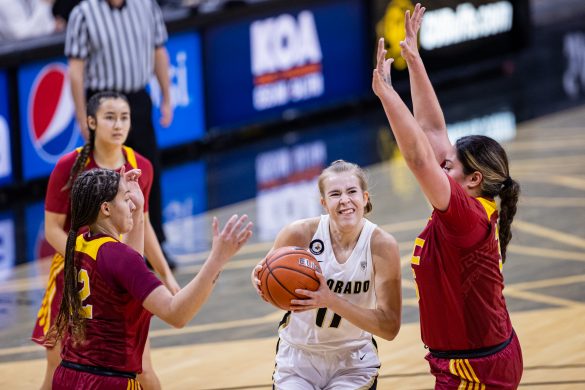 Freshman guard Zuzanna Kulinska drives the ball toward the basket during the first quarter of play at the CU Events Center. Feb. 12, 2021 (Nigel Amstock/CU Independent) 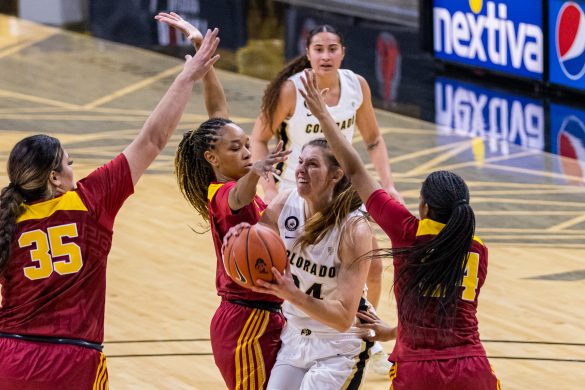 Junior guard Aubrey Knight fights to get the ball toward the basket during the third quarter of play at the CU Events Center. Feb. 12, 2021 (Nigel Amstock/CU Independent) 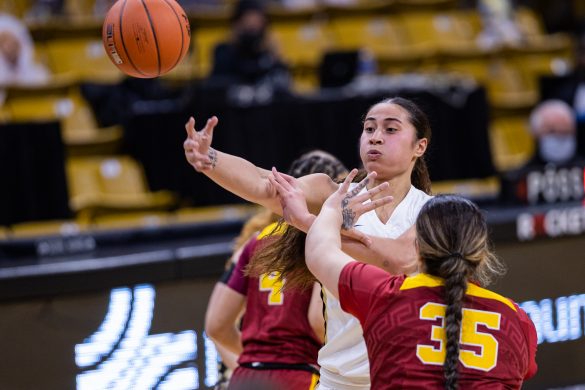 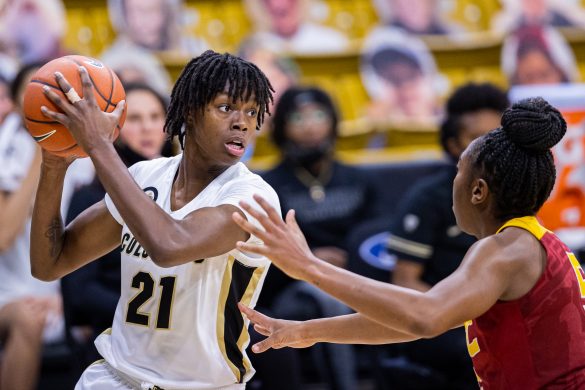 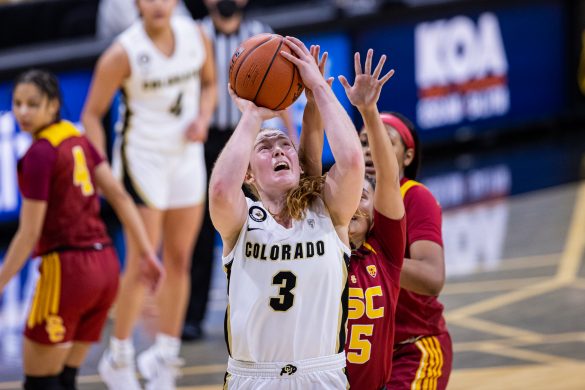 Freshman forward Frida Foreman elevates the ball toward the basket during the third quarter of play at the CU Events Center. Feb. 12, 2021 (Nigel Amstock/CU Independent) 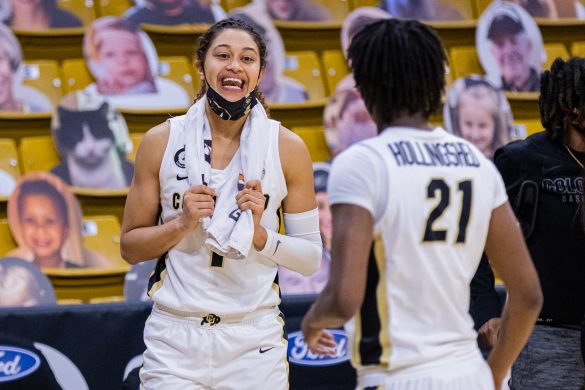