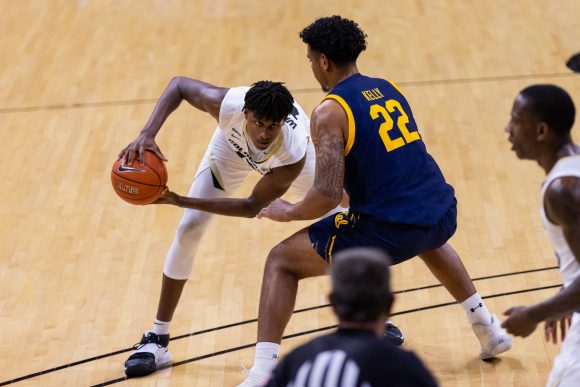 Freshman forward Jabari Walker looks to get the ball around a Cal defender during the second half of play at the CU Events Center. Jan. 14, 2021 (Nigel Amstock/Rivals.com)

There is much to be excited about for the Colorado Buffaloes men’s basketball team as they have rattled off four straight wins to improve to 11-3 (5-2 Pac-12). The usual suspects of the past few seasons have led the way, but there are also a few young stars emerging on the scene. One of those players is freshman forward Jabari Walker.

A former four-star recruit, Walker averaged 16.3 points per game in the Buffaloes’ three wins against Utah, California and Stanford last week. Because of his performance, Walker received the Pac-12 Men’s Basketball Freshman of the Week Honors last week, a first for the Buffaloes.

The 6-foot-8 freshman from Inglewood, California has left an indelible mark on the Buffaloes’ success this season. After posting a double-double at Utah on Jan. 11, he had his best game of the season on Thursday in the Buffs’ 89-60 win against California in Boulder. Coming off the bench, Walker had 23 points on 9-of-13 shooting to go with 11 rebounds.

Walker’s impact has been felt. He said that the game has been slowing down for him, which along with listening to his coaches, has contributed to his success.

“I’m just taking the advice the coaches are giving me and applying it,” Walker said. “Everything else will work itself out.”

On top of that, Walker earning the trust of his teammates has been integral to CU’s recent run. Senior point guard McKinley Wright IV, who was named the Pac-12 Men’s Basketball Player of the Week on Monday, talked about the confidence he has in Walker.

Despite averaging 6.5 points in the Buffs’ first 11 games of the season, Walker kept improving, and his growth showed in this past week’s games.

“I am figuring out the game a little more,” he said. “I know what to expect now. The nervousness is out the window in the beginning of games.”

His coaches are noticing his strides forward as well. Head coach Tad Boyle, speaking after the Buffs’ 77-64 win over Stanford on Saturday, said that younger players like Walker have improved as the season has gone along.

“I think you see Jabari Walker so much more confident when he gets in the game,” Boyle said.

If Walker can build upon the production he had this past week, it will be huge for Colorado. The Buffaloes already figure to be a tough matchup for any Pac-12 opponent. Having consistency and depth is key to a team being able to compete in March. Even though the Buffaloes fell short of an appearance in the AP Top 25 this week, they are Top 25 in nearly every metric that the NCAA Tournament Selection Committee uses.