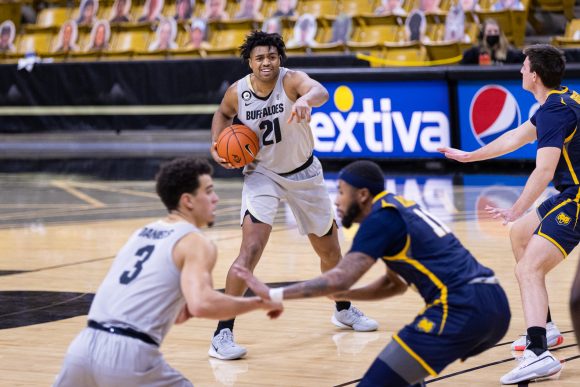 Junior forward Evan Battey seeks to set the offense during the second half of play at the CU Events Center. Dec. 14, 2020 (Nigel Amstock/Rivals)

The University of Colorado men’s basketball team kicked off its Pac-12 slate with a three-game road trip to challenge Arizona, USC and UCLA. Even without fans in the stands, Colorado struggled away from Boulder with its lone win coming against USC on New Year’s Eve.

CU opened the trip on Dec. 28 to face a then 6-1 Arizona squad. Junior forward Evan Battey had his best game of the season with 18 points but CU shot just 33% in the second half. Arizona broke away with an 8-0 run to close the first half and went on to beat CU, 88-74.

“We had some good individual performances but as a team, we didn’t get things going, especially in the second half,” Boyle said. “That’s on me. I take responsibility for that. We hang our hat on defense and that’s the second team in a row that’s shot 52% or higher on us.”

Although CU recorded a season-high 20 assists, the Buffs were unable to get much going in the second half.

Senior point guard McKinley Wright IV suffered an ankle injury late in the game and had to be removed, but he returned on Dec. 31 against USC. Wright delivered 19 points to lead the Buffs past the Trojans without senior center Dallas Walton. CU’s 7-footer was having a comeback season averaging 9.6 points per game and would miss the remainder of the road trip with a lower leg injury.

Battey and senior forward Jeriah Horne picked up the slack to combine for 21 points. Horne, who is a graduate transfer from the University of Tulsa, has been a nice acquisition for the Buffs.

“We knew we were undersized especially missing Dallas tonight but Jeriah did a really good job of bringing the team together before the game and said it was all about heart,” Wright said.

It was senior guard D’Shawn Schwartz, however, who led the Buffs with a career-high 10 rebounds.

Riding high, Colorado entered the new year with a matchup against UCLA on Saturday. The Buffs entered the second half tied at 29 points and later tied the game again at 54. UCLA then rode an 8-1 run to take a commanding 62-55 lead. Senior guard Maddox Daniels missed two three-pointers in the final minute and the Buffs fell, 65-62.

Wright said he was confident in Daniels taking those clutch shots and instead blamed poor defense and rebounding for the rough result down the stretch.

“We couldn’t get enough consecutive stops in a row down the stretch,” Wright said. “We needed to get a couple kills in the second half and we failed to do so. It was tough to get over the hump.”

Colorado now turns its attention to No. 17 Oregon in Boulder on Thursday night at 9 p.m. MST.