Despite loss, Colorado will remember the Alamo Bowl 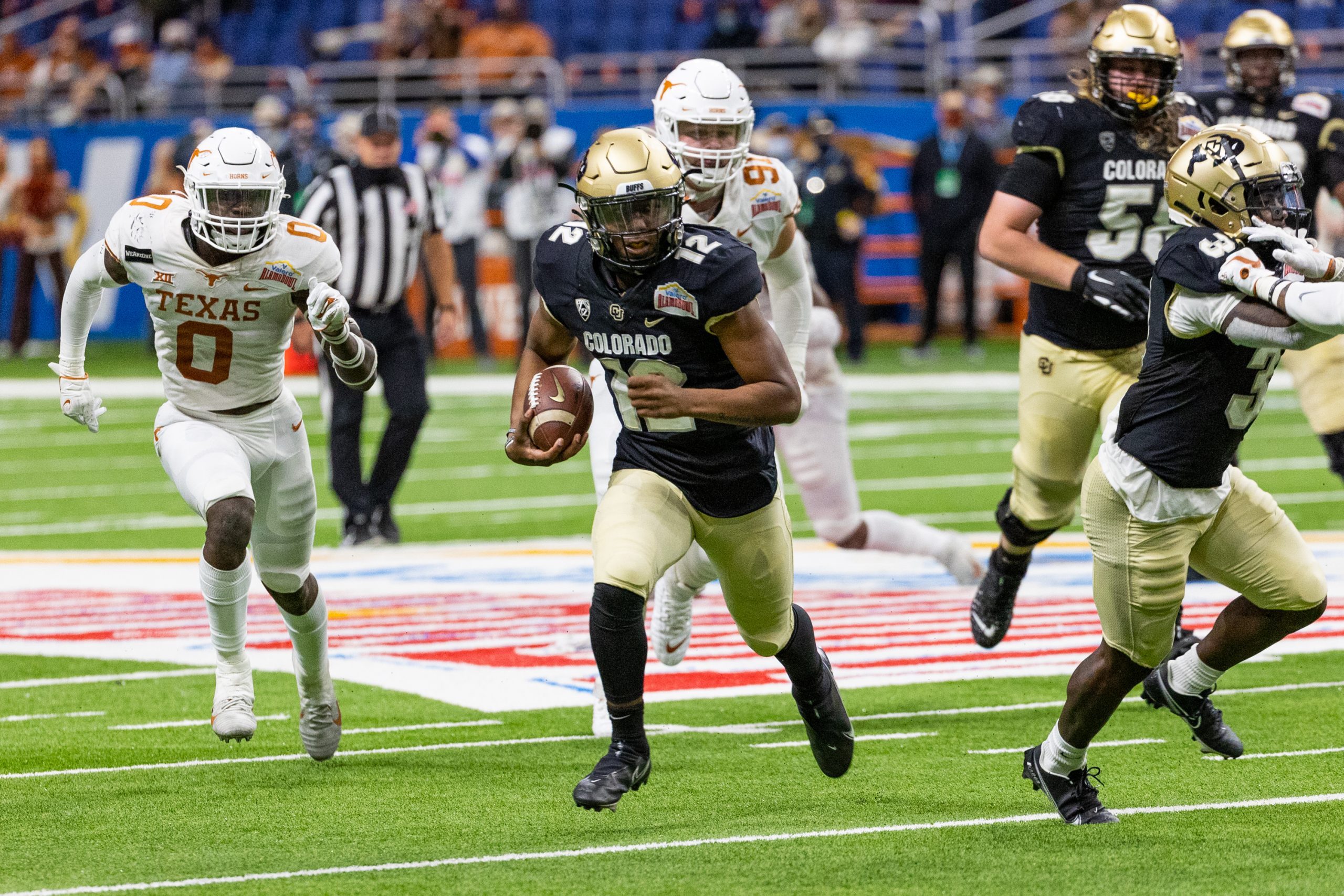 A depleted Colorado Buffaloes’ defense struggled to limit the big plays as CU fell to the No. 20 Texas Longhorns, 55-23 in the 2020 Valero Alamo Bowl. The final score may have looked ugly for the Buffs, but there was plenty of promise on display Tuesday night in San Antonio.

Slashing through a Landman-less linebacker group, Texas’ running back Bijan Robinson rushed for 183 yards and was named the Alamo Bowl’s Offensive Most Valuable Player.

After throwing two interceptions and falling behind 14-0 in the first quarter, senior quarterback Sam Noyer gave way to freshman Brendon Lewis to make his collegiate debut under center. Lewis became the first CU quarterback to debut in a bowl game and led the Buffs 50 yards to the endzone on his first drive. Sophomore running back Jarek Broussard spun his way two yards past the goal line on fourth down to put CU on the board. 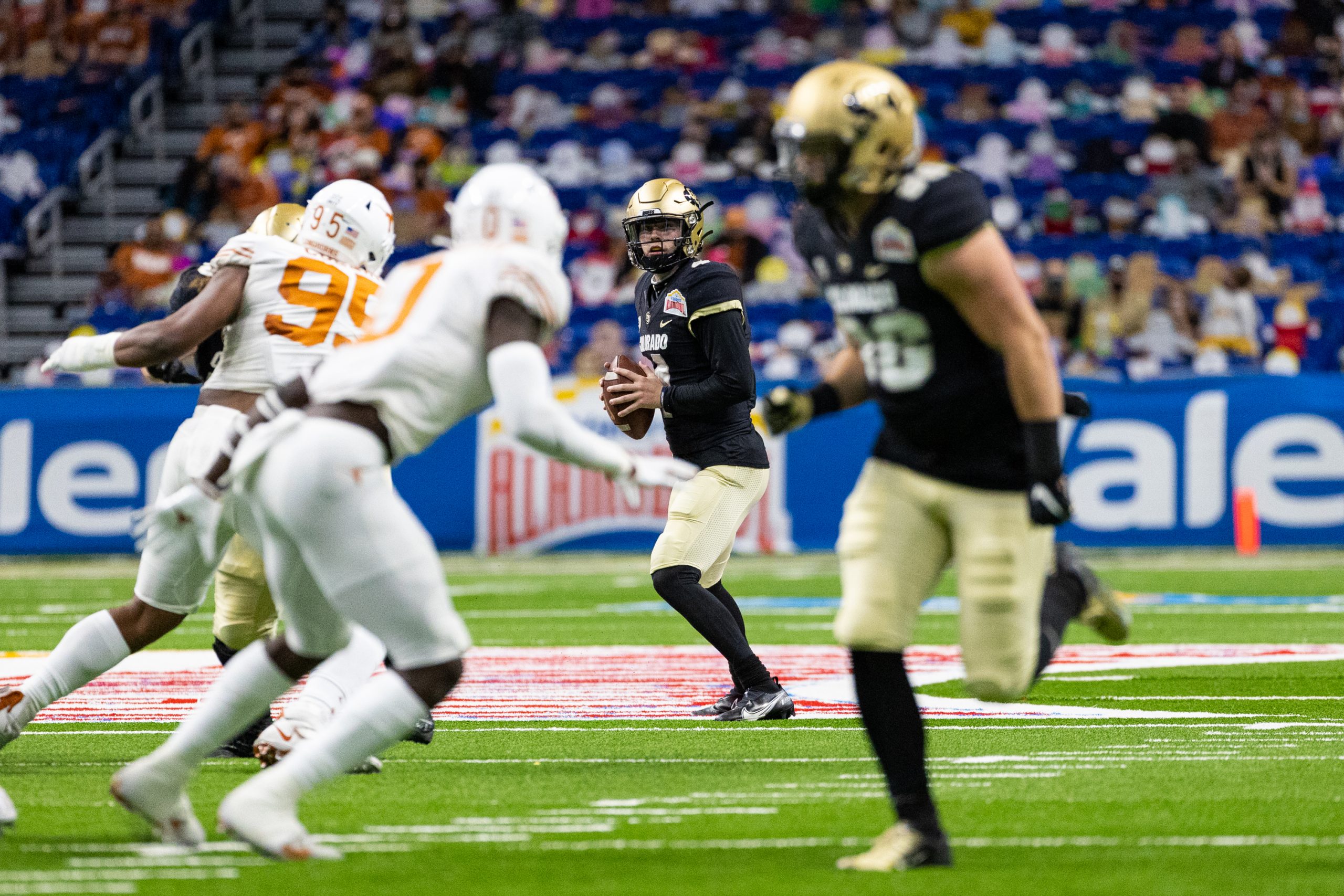 Noyer returned later in the second quarter to orchestrate a two-minute drill that ended in sophomore placekicker Evan Price hitting a field goal. Junior free safety Isaiah Lewis led the Buffs with eight total tackles on the night but it was junior cornerback Mekhi Blackmon who helped CU get back in the game. Blackmon had multiple big hits and pass breakups that helped limit Texas to a field goal in the second quarter. Colorado’s hope for a win peaked at halftime with the Buffs trailing 17-10.

“I think defensively they did some positive things in the first half,” said head coach Karl Dorrell. “Unfortunately both sides of the ball wasn’t working well with each other. We didn’t have enough continuity, making some drives, scoring some points offensively.”

Similar to the first quarter, CU was slow out of the gates in the second half and allowed two Longhorn touchdowns within seven minutes to fall behind 31-10. Longhorns’ quarterback Sam Ehlinger injured his shoulder late in the first half and his replacement Casey Thompson caused CU just as much trouble.

After the game, Dorrell’s frustration on the poor end to the season surfaced.

“It is hard for me to imagine any excitement right now,” Dorrell said. “I’m just being honest. I’m not feeling that, being excited about anything. Even the games that we won this year. It’s really what did we do last, what is the final impression. Those are the things that’s kind of on my mind right now.”

Dorrell opted to keep Noyer in the game to begin the second half and he fared well in his first drive but Price missed a 37-yard field goal. Texas tacked on a touchdown and with the game escaping CU’s grasp, Lewis returned at QB.

Lewis’ talent as a dual threat quarterback emerged on a 44-yard run that set up a three-yard Broussard touchdown. The freshman quarterback later rushed for his first collegiate touchdown in the fourth quarter and would finish 6-of-10 passing with 95 yards. 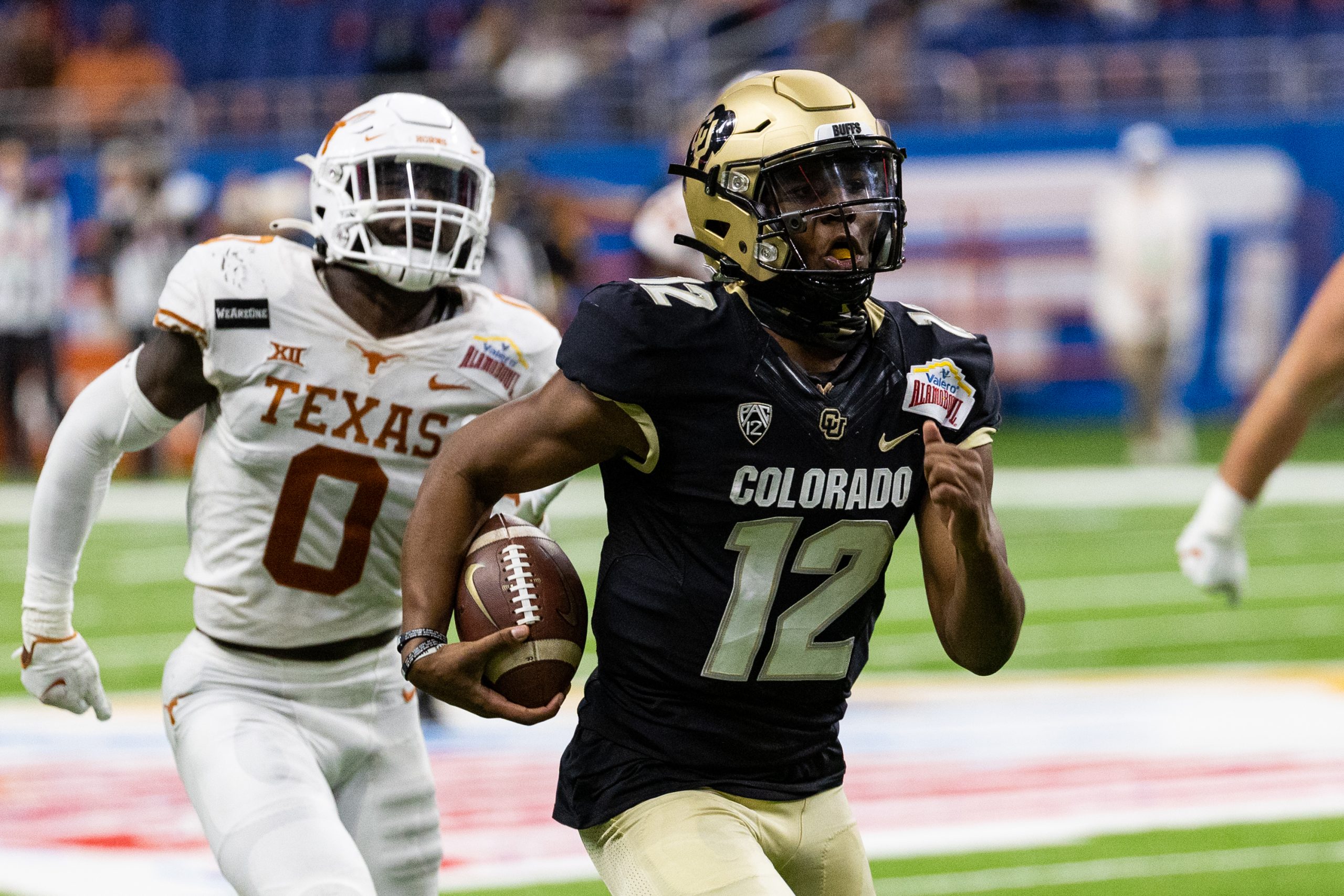 “To be honest, he probably was the bright note of tonight,” Dorrell said. “I think he came in in some difficult circumstances and engineered a couple good drives. He’s been doing a lot of that stuff in practice. It’s good to see him kind of gain some experience, gain some confidence knowing that he belongs at this level, playing against a good program, to have the kind of success that he had.”

Junior nose tackle Janaz Jordan also played well for the Buffs as he finished with a career-high six total tackles. Even with Jordan’s best effort, Texas totaled three touchdowns in the fourth quarter en route to scoring the most ever points against CU in a bowl game.

The Buffs closed the season with an encouraging 4-2 record and more importantly, the opportunity to compete in a bowl game.

“This was a good measuring stick about how far we need to go,” Dorrell said. “I know we didn’t have as many of our scholarship players here, but still we got so much work to do in a number of ways. We just need to kind of put our head down and get to work in this off-season and keep improving week after week, day after day, continue to just build this team, to build their confidence, build their physical skill sets.” 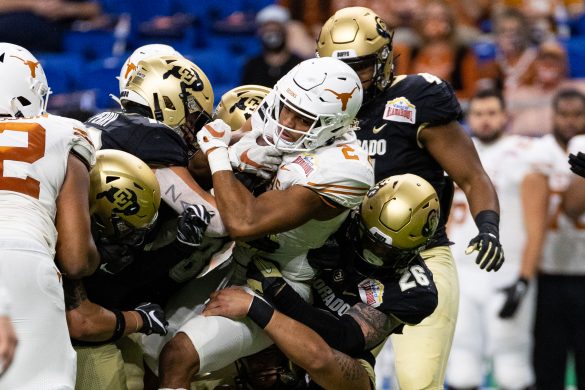 Texas RB Roschon Johnson is tackled by the Buff defense during the second quarter of play at the Alamo Bowl. Dec. 29, 2020 (Nigel Amstock/CU Independent) 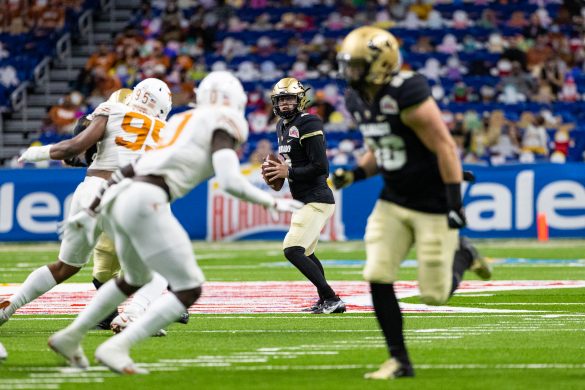 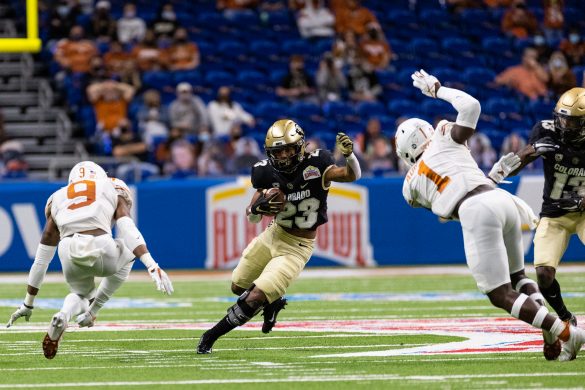 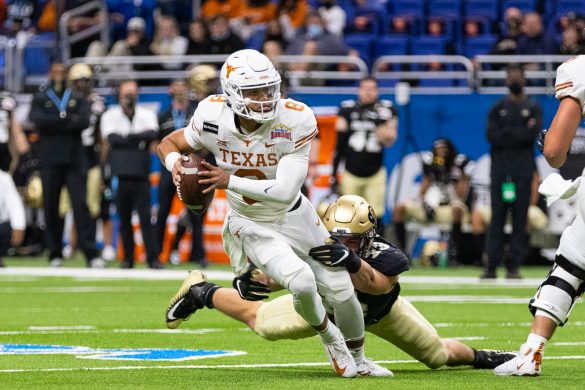 Texas QB Casey Thompson looks to break a tackle during the third quarter of play at the Alamo Bowl. Dec. 29, 2020 (Nigel Amstock/CU Independent) 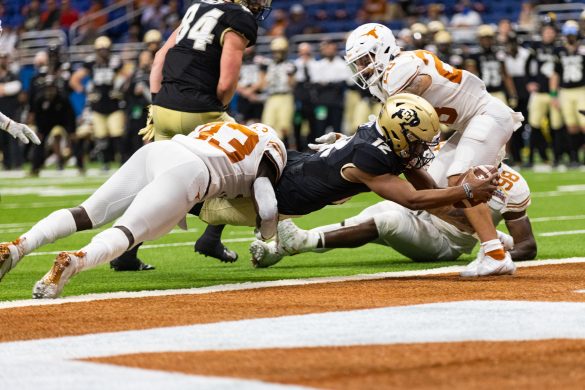 Freshman QB Brendon Lewis reaches the ball over the goal line during the Buffs 55-23 loss to Texas at the Alamo Bowl. Dec. 29, 2020 (Nigel Amstock/CU Independent) 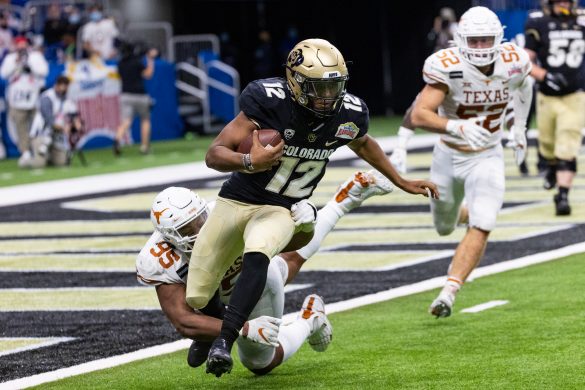 Freshman QB Brendon Lewis breaks a tackle during the fourth quarter of the Buffs 55-23 loss to Texas at the Alamo Bowl. Dec. 29, 2020 (Nigel Amstock/CU Independent) 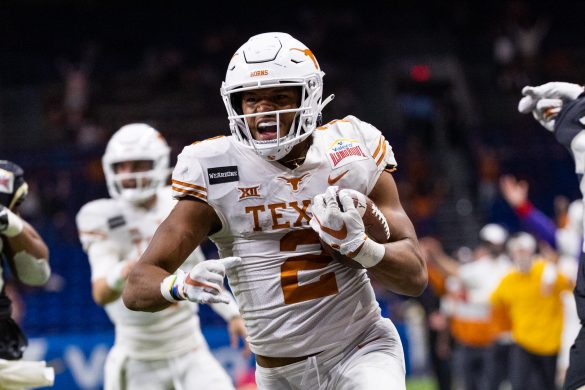 Texas RB Roschon Johnson runs into the endzone during the fourth quarter of the Longhorns 55-23 victory over the Colorado Buffaloes at the Alamo Bowl. Dec. 29, 2020 (Nigel Amstock/CU Independent) 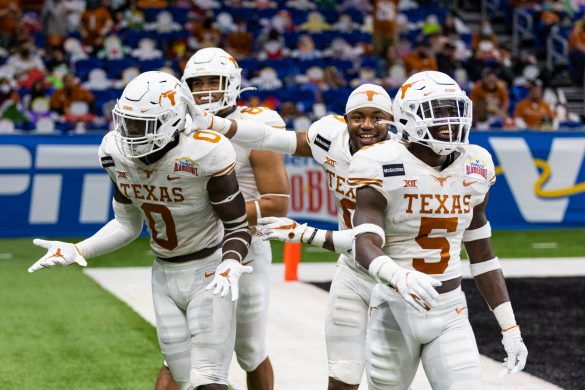 The Texas Longhorns celebrate a touchdown during the fourth quarter of their 55-23 victory over Colorado at the Alamo Bowl. Dec. 29, 2020 (Nigel Amstock/CU Independent) 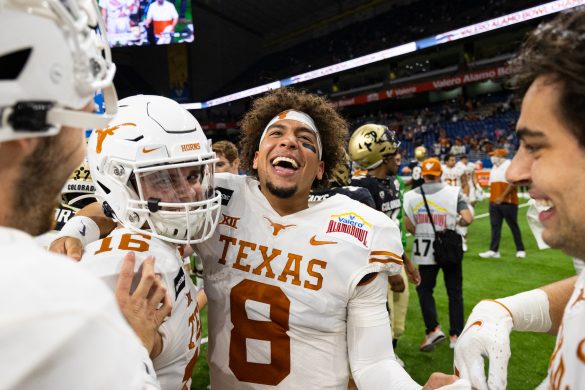 The Texas Longhorns celebrate their 55-23 victory over the Colorado Buffaloes at the 2020 Alamo Bowl. Dec. 29, 2020 (Nigel Amstock/CU Independent)