Buffs get back on track with win over Utah 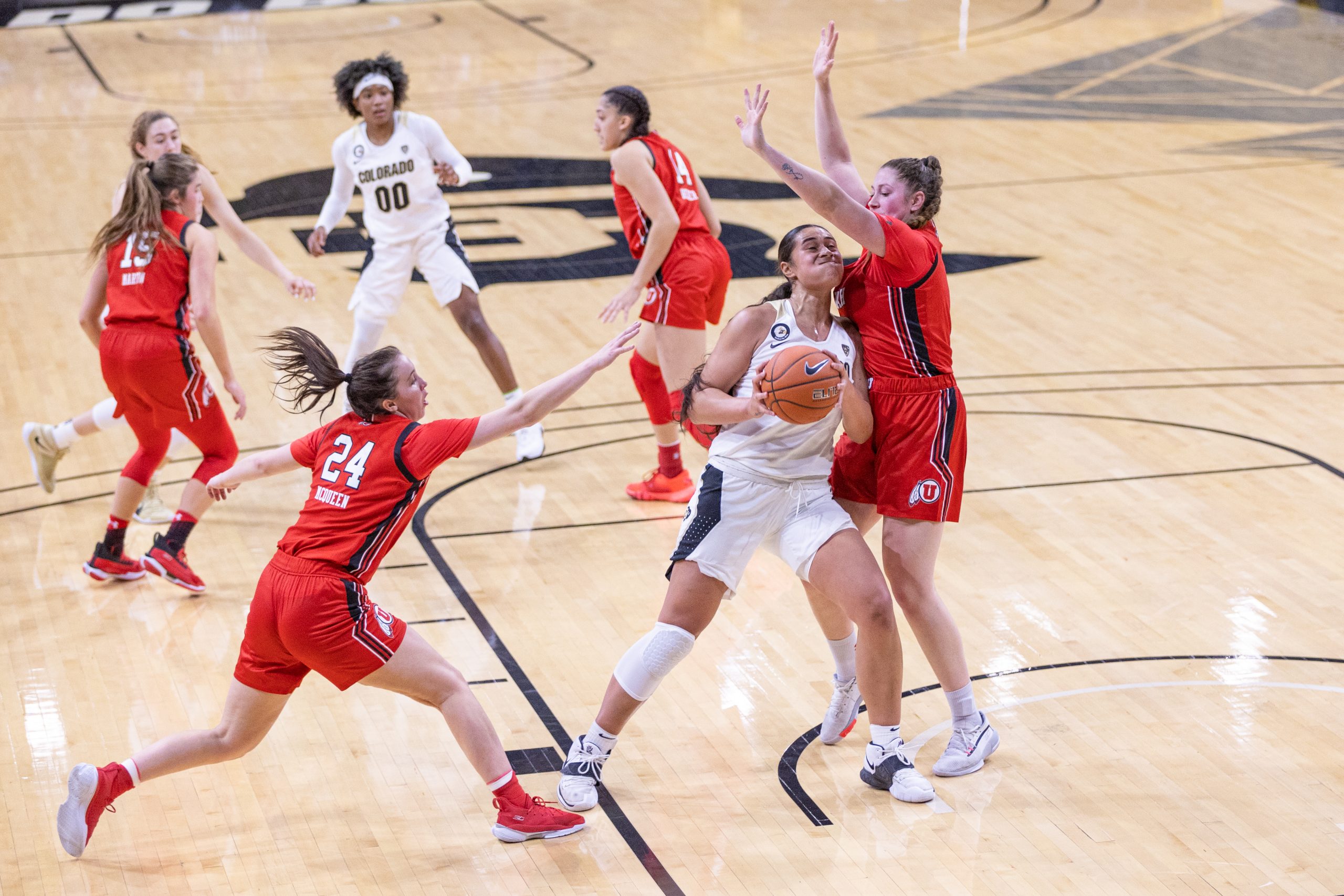 Junior forward Peanut Tuitele muscles the ball toward the basket during the fourth quarter of the Buffs 80-50 victory over the Utah Utes at the CU Events Center. Dec. 14, 2020 (Nigel Amstock/CU Independent)

After losing three games away from Boulder, the (3-3) University of Colorado women’s basketball team unleashed its frustration on the (2-2) Utah Utes Monday at the CU Events Center. Head coach JR Payne’s aggressive defense helped pave the way to an 80-50 win.

Entering Monday, Colorado led the Pac-12 in both blocks (26) and steals per game (11.4). It was a similar story on Monday as the Buffs stripped away 10 steals and forced 25 turnovers. Utah’s poor ball control created 38 Colorado points off turnovers.

For Payne, the message was to simply increase the intensity.

“We just talked to our team about having a really just aggressive mindset; We said ‘everything you do on the court tonight needs to be aggressive,'” Payne said. “It certainly impacted our success tonight.”

Early on, the Buffs were clicking on nearly all cylinders. With the number three on her back, freshman guard Frida Formann was feeling it from three all game. In just her sixth game as Buffalo, she shot a career-high 5-of-6 from deep and helped propel Colorado to a 20-9 lead through one quarter. The Buffs have excelled in getting off to strong starts and Monday was no different.

“We just took control of the game from the jump and we didn’t look back in and I think that was really good for us,” Formann said. “It was also good that we got so many people going in this game and a lot of us kind of gained that confidence back.” 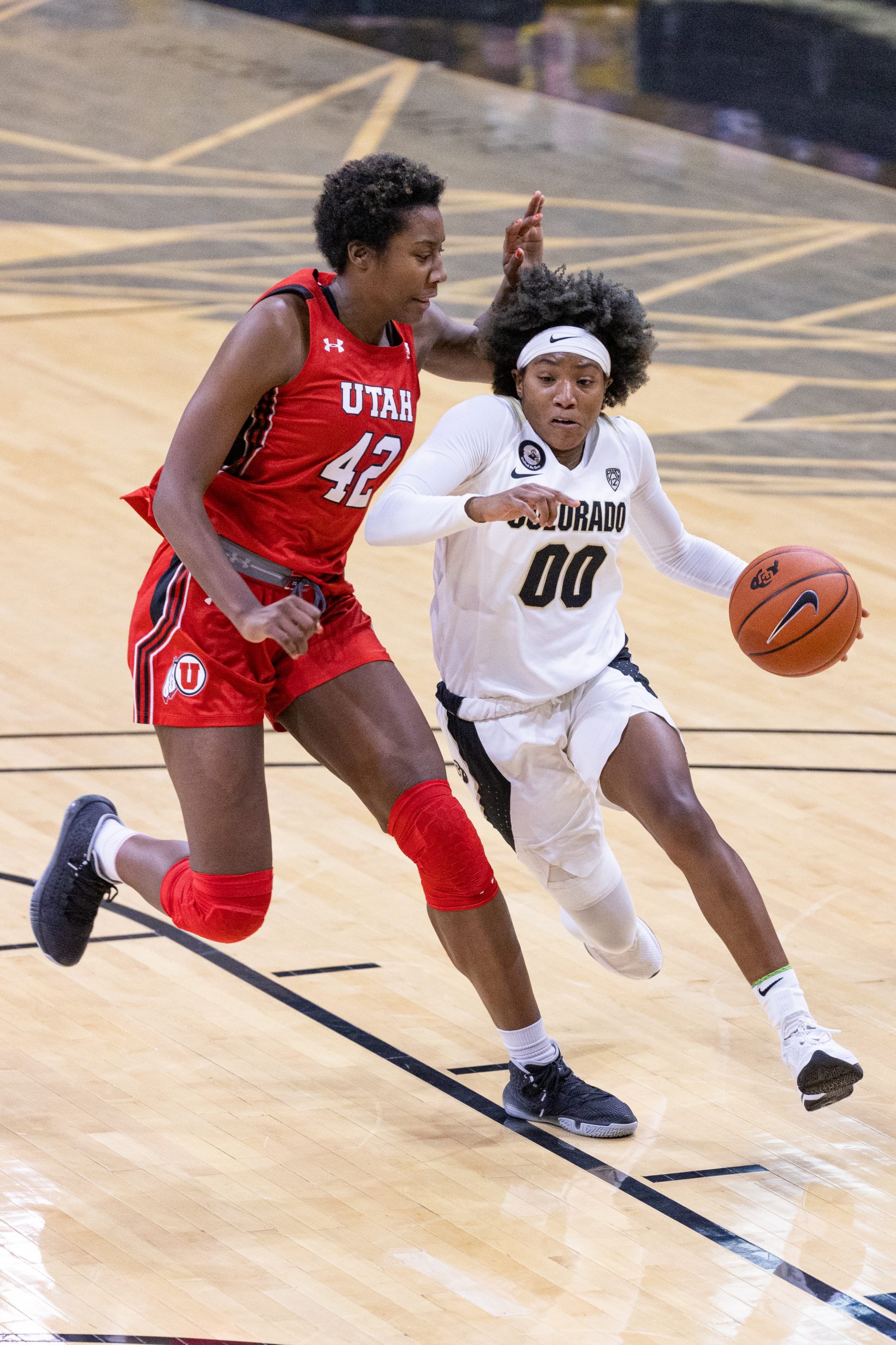 Sophomore guard Jaylyn Sherrod drives the ball toward the basket during the second quarter of play at the CU Events Center. Dec. 14, 2020 (Nigel Amstock/CU Independent)

To help balance the offense, Sherrod preferred to drive and drive hard. Coming off a career-high 22 points against Denver, Sherrod’s ruthless runs to the rim gave her a new best 24 points.

“I’ve been focusing on finishing at the rim because I’m getting to the rim a lot and I think the first couple of games I didn’t do as well as I wanted to,” Sherrod said. “I think it’s more so just a sense of getting back into the groove of things getting back into myself and doing what I need to do to help my teammates.”

Senior forward Mya Hollingshed tallied her Pac-12 leading fourth double-double with 10 points and 12 rebounds. If there’s ever such a thing as a quiet double-double, Hollingshed did just that. Her success on the boards and shooting the basketball has become a near given for the Buffs in 2020.

Colorado hit the locker room with a 42-25 lead, outshooting the Utes 53.6% to 33.3% and both teams finished with a similar mark. Increased ball movement and fewer erratic threes kept CU’s offense going strong according to Payne. There was little stagnation with Sherrod leading the show. Her knack to drive attracted multiple Utah defenders to help, often leaving a Buffalo wide open.

“It’s so much fun to be able to play with her and she does draw a lot of attention and when she does what she does today, then it creates more open looks for me,” Formann said.

Colorado will continue its five-game homestand on Friday against Arizona at 5 p.m. MST. 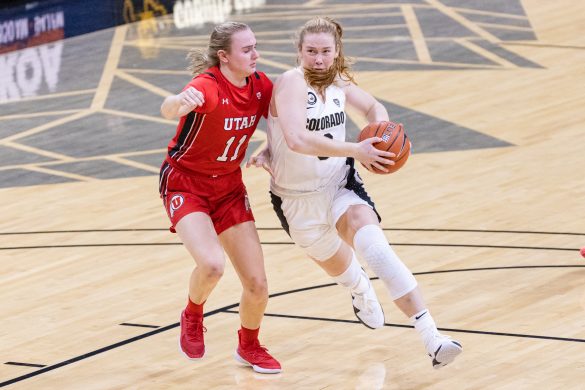 Freshman guard Frida Formann drives the ball around a Utah defender during the first quarter of play at the CU Events Center. Dec. 14, 2020 (Nigel Amstock/CU Independent) 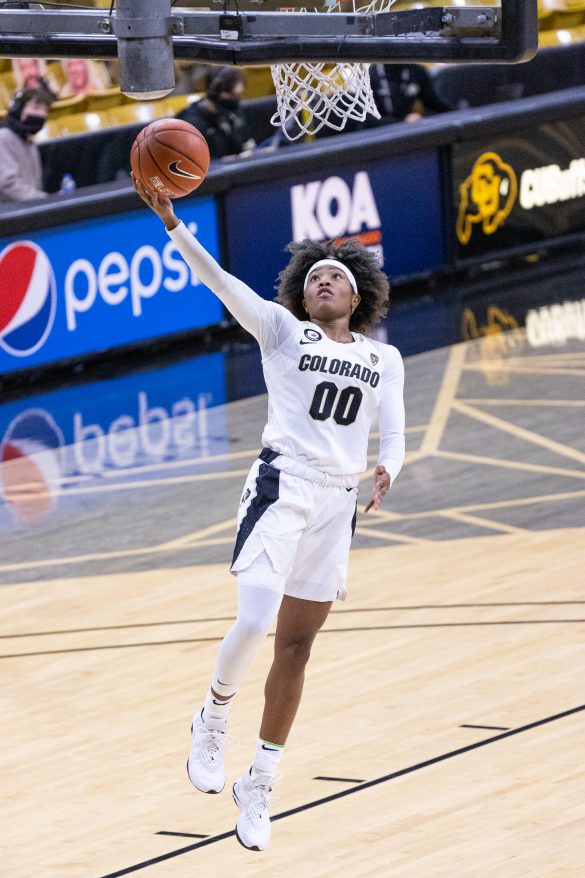 Sophomore guard Jaylyn Sherrod elevates he ball toward the basket during the first quarter of play at the CU Events Center. Dec. 14, 2020 (Nigel Amstock/CU Independent) 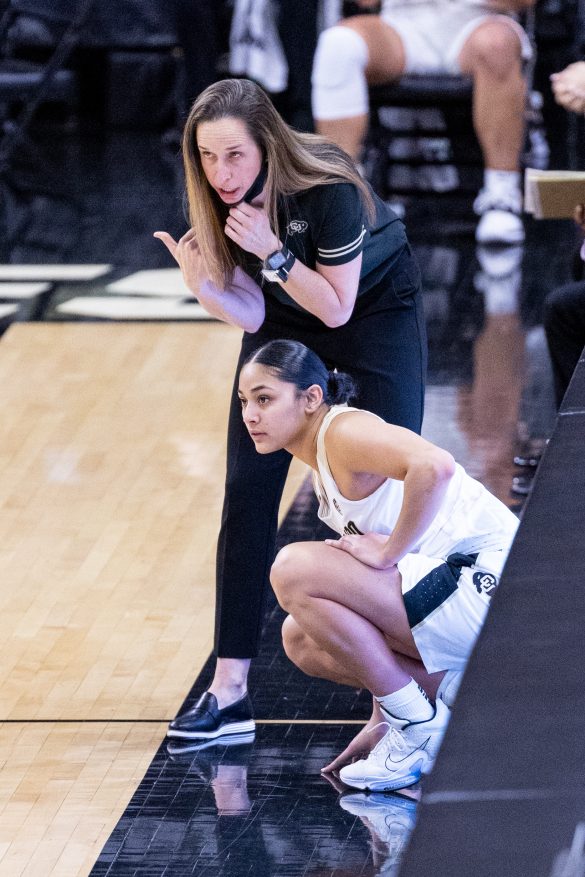 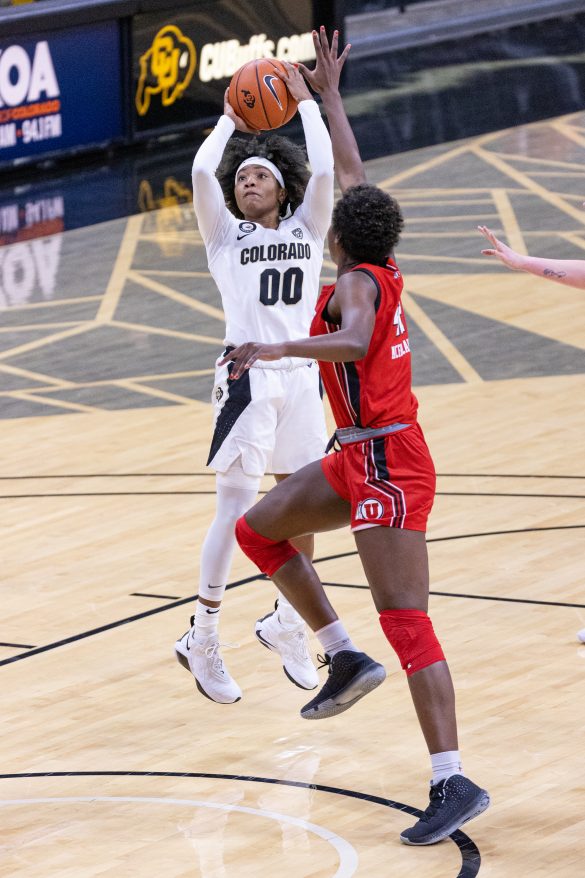 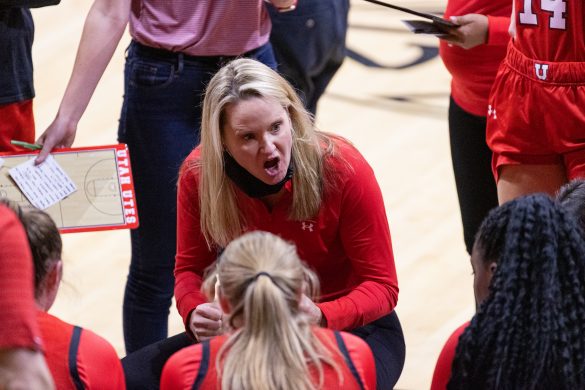 Utah head coach Lynne Roberts seeks to rally the Utes during a break in the action at the CU Events Center. Dec. 14, 2020 (Nigel Amstock/CU Independent) 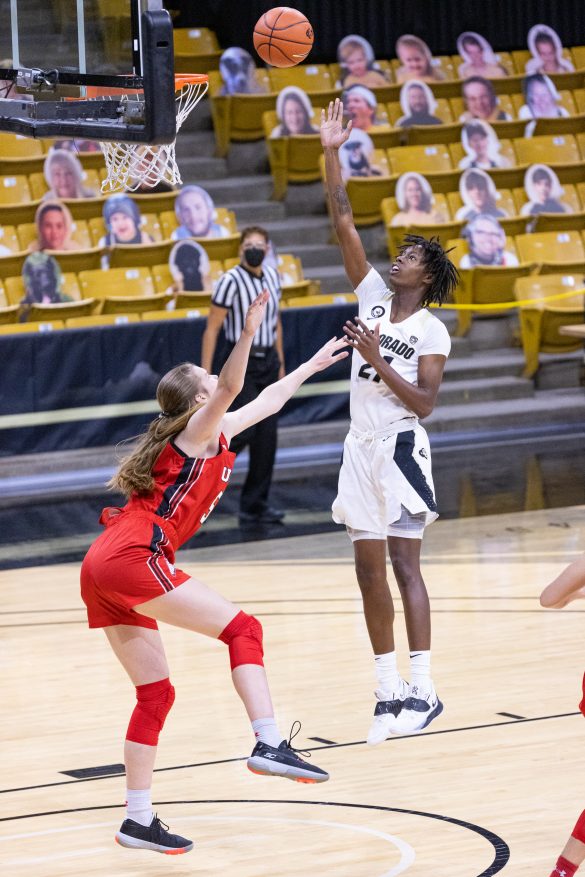 Senior forward Mya Hollingshed lofts the ball toward the basket during the second quarter of play at the CU Events Center. Dec. 14, 2020 (Nigel Amstock/CU Independent) 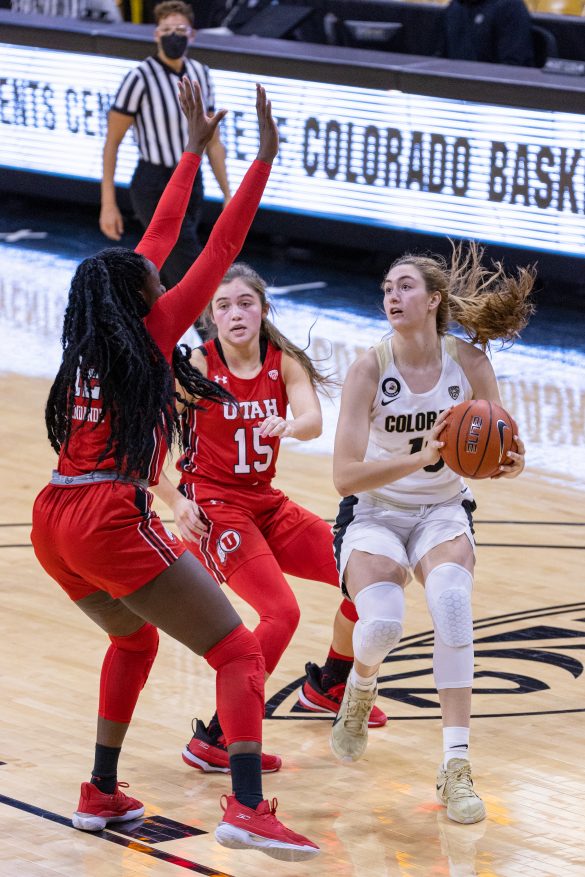 Freshman guard Kylee Blacksten looks to get the ball around two Ute defenders during the second quarter of play at the CU Events Center. Dec. 14, 2020 (Nigel Amstock/CU Independent) 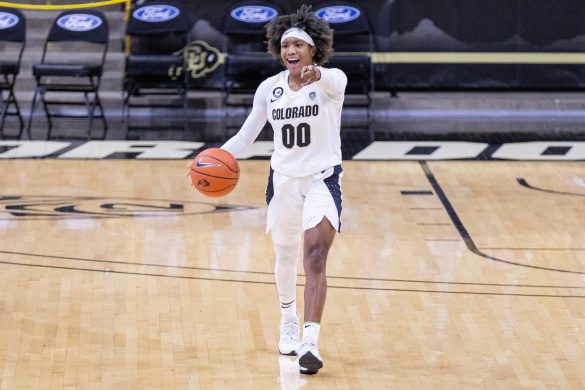 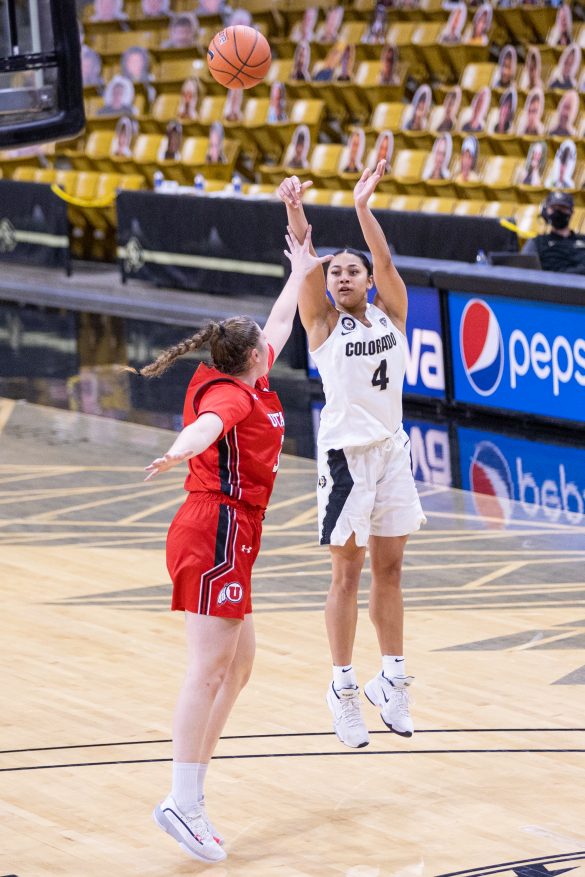