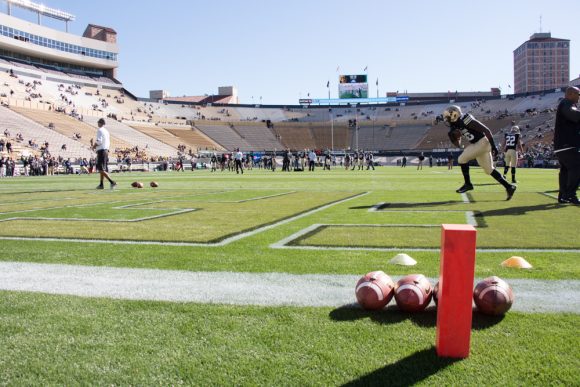 The CU Buffs football team warms up before a game during the fall 2014 season in Folsom Field. (Gray Bender/CU Independent)

With several USC Trojans testing positive for COVID-19, the Pac-12 announced on Thursday that Nov. 28’s matchup between the Colorado Buffaloes and Trojans has been canceled. Fortunately for CU, Athletic Director Rick George set a contingency plan earlier in the week for the Buffs to face the San Diego State Aztecs. Kickoff for the newly scheduled matchup will be at 3 p.m. on Saturday at Folsom Field.

“It is unfortunate that our game at Southern California had to be canceled, but as we all continue to maintain, the most important concern we all have is the health and safety of our student-athletes, coaches and staff,” George said.  “After the Pac-12 CEO’s created some requirements for possible non-conference opponents to fill any vacancies created by cancellations, we moved earlier this week to find a possible opponent to replace the Trojans.  When San Diego State’s game at Fresno State was canceled for similar reasons, I spoke with (SDSU Athletic Director) John (David Wicker) and we put an agreement in place if USC could not play.”

The cancellation of the USC game marks the second consecutive week the Buffs have been impacted after Nov. 21’s matchup against Arizona State was called off for similar reasons.

Colorado last played San Diego State in 2002, a game in which CU won, 34-14. The Buffs open as three-point favorites against the 3-2 Aztecs who sit in 5th place in the Mountain West Conference. Per Boulder County restrictions, fans will not be permitted into Folsom Field but can watch the game on the Pac-12 Network.