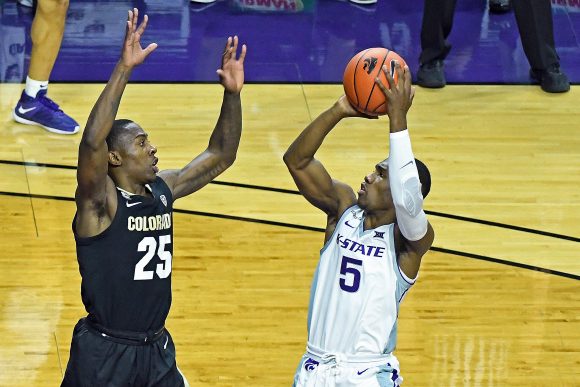 The Little Apple Classic came to a close with the Colorado Buffaloes men’s basketball team taking on the Kansas State Wildcats Friday evening in Manhattan, Kansas. Following a successful outing Wednesday night against South Dakota, the Buffaloes improved to 2-0 on the year. Colorado faced the Wildcats for the first time since the former conference foes met in the quarterfinals of the 2011 Big 12 Championship and came away victorious on Friday, 76-58.

CU was without senior forward D’Shawn Schwartz for Wednesday’s game against South Dakota due to possible COVID-19 exposure. The Colorado Springs native didn’t play in Friday’s matchup either, after testing positive for the virus. Schwartz was one of three Buffaloes held out against the Wildcats, including redshirt freshman guard Keeshawn Barthelemy and freshman forward Tristan da Silva, who both sat due to contact tracing protocol.

Kansas State delivered the first blow, jumping out to a 7-2 lead early. The Buffaloes reached their first half turnover total (two) from Wednesday’s contest in less than three minutes of action against the Wildcats.

When asked about whether or not the Buffaloes’ slow start had anything to do with the news surrounding Schwartz, Barthelemy and da Silva, head coach Tad Boyle said not at all.

Freshman guard’s Nique Clifford and Luke O’Brien saw early action against Kansas State with Barthelemy’s absence. Both teams suffered first half scoring droughts with Colorado failing to score for nearly six minutes. The Wildcats took advantage, going on a 12-0 run and taking a 13-point lead at the 8:40 mark. Pairs of successful free throws from freshman forward Jabari Walker and Wright IV ended the K-State run. Walker trimmed the Wildcat lead to five by the under-eight timeout, finishing through contact on the break.

Wright IV said postgame that the flagrant foul which resulted in four straight free throws for the Buffs was a major turning point in the first half.

“That got us going a lot,” Wright IV said. “I got my head knocked to the ground and that ain’t ever happened to me before.” The senior mentioned that following the play, CU’s Director of Player Development Nate Tomlinson told him to “turn it up.” 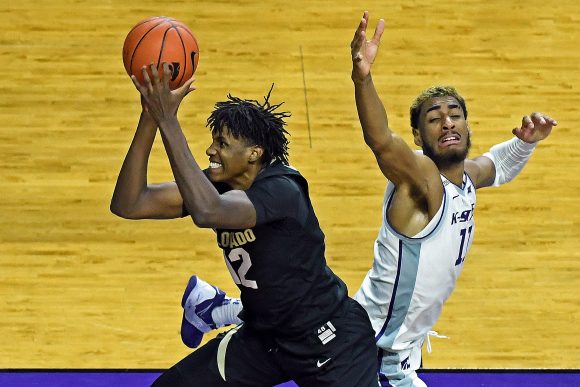 Wright IV and Walker, similar to the season-opener against South Dakota, carried the scoring load early for the Buffs. The duo combined for 13 of Colorado’s 20 points through almost 15 minutes. CU leaned on its defense, their staple from a year ago, to weather the early Kansas State storm. A free throw from senior forward Dallas Walton gave the Buffaloes their first lead at the 4:52 mark of the first half.

Boyle had high praise for Walker postgame, the freshman out of Arizona’s Compass Prep.

Wright IV led the Buffaloes with nine points and three assists at the break. Senior forward Jeriah Horne led Colorado on the glass with three boards. Kansas State took a one-point lead into the locker room. 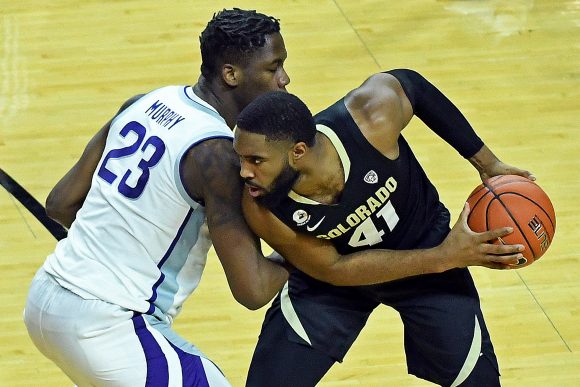 Junior guard Eli Parquet opened the second half scoring for the Buffs, knocking down a three giving Colorado the lead. Foul trouble bled over from Wednesday’s matchup for Walton, picking up his third foul early in the final 20 minutes. Back-to-back threes for Kansas State tied the game at 37. Three-pointers proved to be a legitimate weapon for the Wildcats sinking 30 points from downtown. 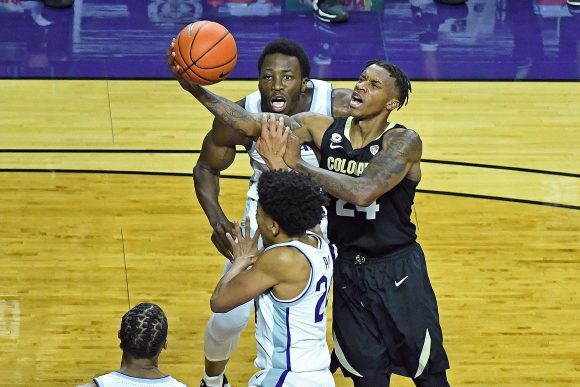 The margin remained relatively close for a chunk of the second half. A floater from Wright IV and fast-break assist on a Horne layup gave Colorado a five-point edge at the 14:20 mark. Wright IV’s continued efficiency from the field allowed the Buffs to build a seven-point cushion by the under-12 timeout. The senior from North Robbinsdale, Minnesota finished with 24 points on 10-of-16 shooting.

Wright IV has the backing of his head coach, despite being left off the preseason All-America team. Boyle said the senior guard is an All-American from both his and the team’s perspective.

“I said it Wednesday,  I’ll say it tonight; McKinley Wright is an All-American,” Boyle said. “He’s our All-American. I don’t care what anyone says. I’m sick of trying to find the right adjectives. I love the kid.”

Walker and Wright IV led the way for Colorado in the second half. The preseason all-conference performer found Walker under the basket to extend the CU lead to double-digits. An and-one from Parquet gave the Buffaloes a 61-48 advantage at the under-eight timeout.

A three-pointer from the Wildcats trimmed the Colorado lead to ten with under four minutes left. However, solid defense and free throw shooting late led the Buffaloes to victory. CU defeated Kansas State 78-62 as Wright IV put together back-to-back 20-plus point performances in Manhattan.

The Buffaloes will travel to Tucson to face Arizona next Wednesday, Dec. 2 at 6 p.m. MST.