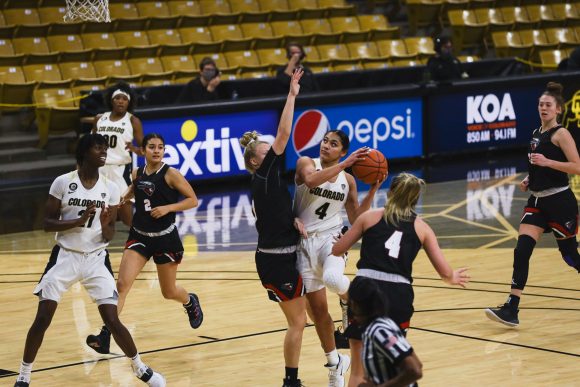 If the Western Colorado Mountaineers fell to the University of Colorado Buffaloes but no fans were in attendance, did it really happen? Tipping off their coronavirus stricken 2020-21 season, the CU women’s basketball team did indeed defeat the Mountaineers, 77-50, Wednesday night at the CU Events Center.

With Colorado’s last contest coming back on March 5, the Buffs showed no rust against the Division II Mountaineers. Freshman guard Frida Formann impressed early with a three-point make to give the Buffs an early 10-4 lead. Head coach JR Payne wasn’t surprised when Formann finished with 13 points on the night.

“We knew as soon as she committed that we had just committed and signed a really, really good basketball player,” Payne said. “We knew that she was going to be able to score the basketball, she defends, she’s a big strong guard, can rebound, (and) can play (the) one-through-three (positions).”

Formann’s style of play was no mystery throughout the game. She led the Buffs with 14 shots from the field and eight from three-point range.

“I know that I want to shoot those shots and my teammates know that too,” Formann said. “It’s what I do in practice too so I just tried to focus on just doing what I usually do. But of course it was really nice to get going early so I could kind of relax and not think about that so much.”

Western State managed just two more points in the first quarter and CU gained a commanding lead, 20-6. Not much changed in terms of momentum in the second quarter and the Buffs brought a 39-15 lead into the locker room with the help of senior forward Mya Hollingshed’s nine points. 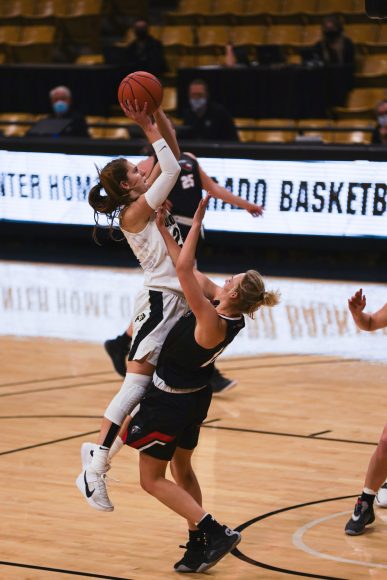 On defense, CU’s effort was historical in the first half, limiting Western State to 3-of-31 from the field. The 9.7% was the lowest ever against the Buffs in a half. The Mountaineers did, however, surpass the fewest points scored on a Buffs’ defense (New Mexico scored 22 against CU in 1991) with a layup in the third quarter.

The Buffs got away with 13 first half fouls as the Mountaineers were 9-of-16 from the stripe. Formann said their defensive success was simply a result of sticking to the game plan.

“I think we were just sticking to what we had talked about in practice about containing them,” Formann said. “We fouled them a lot in the first half, which we shouldn’t have, but I think we just sticked to what we had agreed on and that really helped us which slipped a little in the second half. But if we just stay on top of that, we’re in a really good place.”

Despite a solid defensive first half, Western State gained confidence in the second half scoring 35 points. Hollingshed said the Buffs are still looking to find their “rhythm” on defense after just one game in the books.

Freshman success was a theme throughout the game with 20 points coming courtesy of the Buffs’ youngsters. Along with Formann, guard Kylee Blacksten had 3 and guard Alyssa Lafontaine scored 4. Lafontaine flashed her basketball IQ with a nice cut to the rim and score in the third quarter. “We love our freshman class,” Payne said.

Although CU led by as many as 36 points, Payne gave her leading scorer Hollingshed 29 minutes to record a 19-point and 11-rebound double-double.

Colorado was outscored 20-13 in the fourth quarter but the Mountaineer comeback wasn’t enough.

Payne’s Buffs will stay in Boulder during the holiday weekend, hosting the Air Force Falcons on Saturday at 2 p.m. MST.