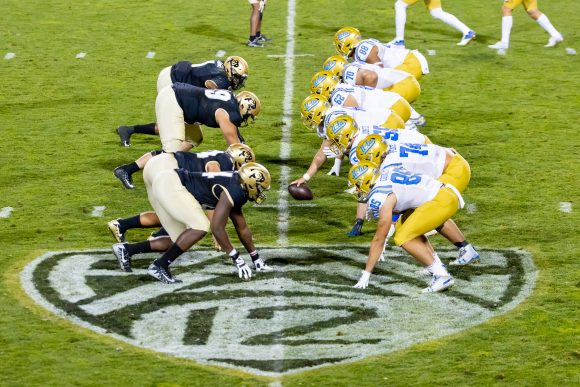 The CU Buffs line up for the snap during the fourth quarter of their game against the UCLA Bruins. Nov. 7, 2020 (Casey Paul CU Independent)

The COVID-19 cancellation bug has finally hit the Colorado Buffaloes. Members of CU’s Nov. 21 opponent, the Arizona State Sun Devils, have tested positive and forced the cancellation of Saturday’s contest.

“We’ve been real fortunate about keeping our players healthy through camp and so far during the first couple of weeks,” said head coach Karl Dorrell. “We have known all along that this has been a real possibility and it’s something that is out of our control.  It’s literally a week-by-week deal and we’ll continue to move forward.”

While Athletic Director Rick George said he will “look at any and all options about us being able to play this weekend,” the sour news tastes even worse coming on the heels of a 2-0 start. The Buffs have scored 83 points in two games and have put up points in all eight quarters to open their season for the first time since 2013. Even more, it hasn’t been just one Buff doing the damage; six different Buffaloes have a touchdown to their name. Senior quarterback Sam Noyer and his gaggle of offensive weapons are making noise in the Pac-12 South.

“We are building something special with coach Dorrell and this team,” said Noyer, who was named the Pac-12’s offensive player of the week for his performance against Stanford. “Everyone is buying in. Guys are having fun out there, it is good to see that again. I haven’t seen that in a couple of years. Guys are really enjoying being out there on the sideline. Everybody wants to win and you see it from the fourth-string all the way up to the first-string.”

Leading the receiving corps has been sophomore Dimitri Stanley with 192 yards. His 55-yard receiving touchdown against Stanford reminded everyone just how explosive he can be. Dorrell said that continuing to capitalize on depth, in all facets, will be crucial going forward.

“The biggest thing is we want to continue to develop our depth and improve schemes on offense, defensive and special teams,” Dorrell said. “We can always improve those areas.”

Dorrell added that he believes Colorado’s stout defense allowed for the offense’s success against Stanford. For the second consecutive week, CU’s D limited the opponent’s starting running back to under 60 rushing yards. Senior inside linebacker Nate Landman was the star on Saturday, recording 17 tackles and garnering the Pac-12’s defensive player of the week.

Colorado’s secondary has plenty of room to improve, however, after allowing over 300 passing yards in both games. With limited experience, freshman cornerback Christian Gonzalez has been picked on by opposing quarterbacks but Dorrell said Gonzalez is “trending in the right direction.”

Fortunately for the Buffs, hope remains for a new opponent this weekend; UCLA and Cal were able to meet up on Sunday after their opponents (Arizona State and Utah) were forced to cancel. The Buffs aren’t alone in missing games with Utah yet to hit the field and ASU out for a second straight week. If CU is unable to find a replacement opponent, it will be recorded as a bye week and the Buffs will be staring down No. 20 USC on Nov. 28.