We Are Against Patriarchy (WAP): a discussion about sexual liberation in music 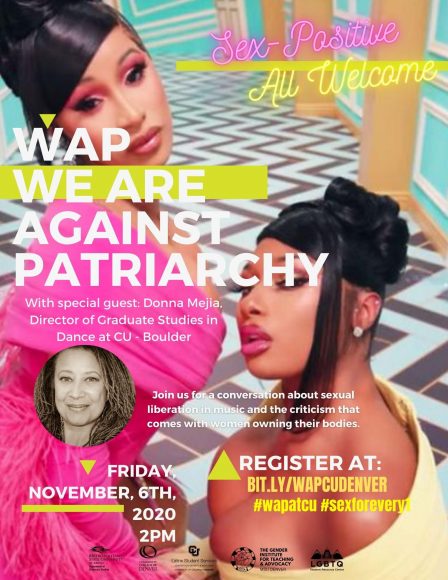 “WAP: We are against patriarchy” panel (Courtesy of CU Denver)

With the release of Cardi B’s song “WAP” came criticisms of how the lyrics and music video displayed the objectification of women and fueled sexism. These criticisms were found primarily on social media platforms, including Twitter.

On Friday, Nov. 6, University of Colorado Denver and Sweeann Moreno, graduate assistant and researcher in Latinx Student Services and Center for Identity and Inclusion, hosted a discussion entitled “WAP: We Are Against Patriarchy” with special guest Donna Meija, CU Boulder’s director of graduate studies in dance. The discussion aimed to create a dialogue about sexual liberation in music, focusing on social criticism of female body positivity and sexuality, particularly in relation to the well-known song, “WAP”.

“What I’d like to do today is not tell you how to respond to this video or tell you what to think. I’m really interested in providing a deeper context for how to view it,” Mejia said, before providing background information about sex, gender, race and feminism in relation to music and dance.

Professor Mejia is a choreographer, scholar, instructor and performer, who specializes in contemporary dance. Along with performing, she is involved in philanthropic efforts of the private project The Sovereign Collective, a self-described “movement arts and social action collective.” Her research interests focus on issues of gender representation, ethics and cultural appropriation related to dance.

To establish a historical context, Mejia delved into female sexuality in dance and music from more than 4,000 – 8,000 years ago, focusing specifically on Mesopotamia. Mejia spoke of the frame drum, which was primarily associated with women and paired with dancing as a form of worship. In these cultures, archeological and anthropological records show women held a strong influence in world religion,  which manifested through musical expression.

“Women were very much in charge,” Mejia said.

Mejia continued, describing similar suppression of female sexuality in America in recent times. When Thomas Edison invented the kinetoscope, an early movie camera, he recorded Fatimah Djmille, an Egyptian dancer, as a form of dance ethnography. However, when this film was released to the public, bars were placed over her hips and chest, because the movement was thought to be outrageous and forbidden.

Mejia explained, “We have a long history here of denigration of women and suppression of matriarchal leadership.”

Other examples of how females, particularly females of color, have been and are denigrated include cultural appropriation, stereotypes of females and exploitation of the black female body in folk music of the nineteenth century. Mejia specified, stating that white women are often stereotyped as being models of purity and self-respect, while black women are stereotyped as “innately promiscuous, even predatory”.

In a personal example, Mejia explained how three years ago the county of Boulder “sent around memos to all families regarding their senior prom dances, warning students that if they were caught grinding with their hips they would be expelled from the dance.” Grinding originated in the hip-hop music scene, a genre of music often associated with Black communities. Given this cultural context, the county of Boulder’s judgment of what is and is not appropriate and socially acceptable, according to white culture, can be seen as cultural and sexual suppression of non-white cultures.

In regards to the music industry, the statistics show the large gap between men and women in positions of power or recognition. Mejia gave specific examples, such as how women make up 12.3% of songwriters and 2.1% of producers. Of all female songwriters, only 43.3% are women of color.

Relating these statistics back to WAP, “Cardi B’s contract is with Atlantic Records, which is owned by Warner Records, and the two CEO’s of Warner are white males,” Mejia said.

Mejia later reconnected with the initial topic of the discussion, the criticisms of “WAP.” Though current technology and social media creates a forum for discussion, the large gap between the generational understanding of cultures can be an issue. Mejia claimed that because a video can go viral in a short span of time, it typically reaches younger generations first, while older generations, who tend to be more conservative, are left behind.

“So, most of the outrage coming from the WAP video is not necessarily coming from youngsters. They’ve been having these conversations,” Mejia said.

In order to create an understanding of the impact this song and music video has had on society, Mejia listed some of the takeaways, including how the video “renders visible Black, brown and Latinx female voices” and also “demolished viewing records.”