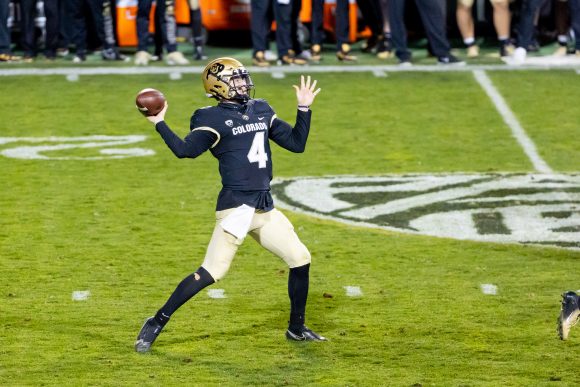 Senior quarterback Sam Noyer throws the ball to an open teammate during the second half of play against UCLA. Nov. 7, 2020 (Casey Paul CU Independent)

Following a high scoring affair to start the season with a win against UCLA last week in Boulder, the Colorado Buffaloes take off for the Golden State to take on Stanford in week two. Starting the better-late-than-never season of 2020, these two teams had different experiences to kick off the campaign.

With new head coach Karl Dorrell facing his alma mater and former employer UCLA, Colorado followed an exciting first half with a nerve-racking second in a 48-42 win at Folsom Field. Surprisingly impressive offensive performances led CU to build a 35-7 lead in the second quarter before its defense struggled in the second half to let the Bruins back in the game. Meanwhile, veteran Stanford head coach David Shaw saw his shorthanded squad keep it close for a half before  No. 11 Oregon put them away after halftime for a 35-14 loss in Eugene. Although the Cardinal only trailed 14-7 at the break, the Ducks broke away for a relatively easy victory.

Offensively, the Buffs saw multiple question marks become exclamation points on a win where scoring became key. Following the end of three-year starting quarterback Steven Montez’s college career, senior Sam Noyer beat out junior Tyler Lytle and highly-touted freshman Brendon Lewis in a long quarterback battle through camp. While some have questioned Noyer’s potential after never having started a college game (and even moving to safety last season), the 23-year-old was sensational in his debut, racking up 321 offensive yards and two touchdowns (257 yds/1 TD came through the air and 64 yds/1 TD came on the ground). Despite his lack of in-game experience, the Oregon native looked calm, cool and collected all night, guiding the offense with a steady hand.

Although the original plan was for junior tailback Alex Fontenot to start, an injury forced CU to make sophomore Jarek Broussard the featured tailback. The result? 187 yards and 3 touchdowns on 31 carries in a stunning debut for Broussard, who may have cemented himself as the starter.

Meanwhile, for the Cardinal, points came at a premium for most of the night during its first game. Mere hours before kickoff, starting QB Davis Mills and wide receiver Connor Wedington were announced to be unavailable due to positive COVID-19 tests and contact tracing. Due to this, backup QB Jack West started and turned in a decent performance (13/19, 154 yds) despite a strong running game bolstered by stout play on the offensive line. Not only did the so-called “Tunnel Worker” offensive line allow zero sacks and only one QB hurry all night, but they also opened things up for 6.4 per carry on the ground for the Cardinal. Despite this, the offense couldn’t get things rolling at the empty Autzen Stadium, getting into the end zone only twice all night.

On the defensive side of things, Colorado had a decisively mixed bag that can be told as a tale of two halves. In the first half, the Buffs forced four turnovers (three fumbles, one interception) that helped the offense produce five first-half touchdowns. In the second half, however, the defense struggled with giving up the big play. This included a 65-yard touchdown run by UCLA QB Dorian Thompson-Robinson and some poorly defended screen passes by the secondary that allowed the Bruins to climb back into the game. The Buffaloes were also hit or miss on creating pressure throughout the evening with eight QB hurries but only one sack courtesy of senior defensive end Mustafa Johnson.

For Stanford, its defensive front struggled to create stress for Oregon most of the night. Stanford’s defensive pass rush mirrored that of Oregon’s with no sacks and little pressure created throughout, although both team’s offensive lines may deserve credit as well. Needless to say, being put in a situation where an excellent offensive performance will have to decide the game was not ideal for a Stanford upset to occur. On a brighter note, a young Cardinal secondary turned in a nice performance. Especially deserving of praise was junior cornerback Ethan Bonner, who held his own in a debut performance that included five tackles, with four being solo.

Keys to the Game:

Will starting Stanford QB Davis Mills be available to play with COVID-19 protocols?

After sitting out last week, it is still unclear if Mills will be able to play on Saturday against CU. The school has not disclosed if the benching was because of contact tracing or a positive test, while Wedington announced on Twitter that he had been sat because of tracing as he had tested negative. There is also speculation that Mills could have received a false-positive test. If both can make a go of it, the Cardinal offense could receive a much-needed boost.

Can Noyer and Broussard pick up where they left off?

Yes, Sam Noyer and Jarek Broussard were sparkling in both of their starting debuts at QB and RB; but can they keep the good times rolling? It’s hard to blame UCLA for being somewhat unprepared as Noyer and Broussard were both announced as starters just days before the game. Stanford could be more prepared in what to expect from CU’s offensive duo.

Who will win the battle in the trenches?

Both offensive lines had a pretty good night last Saturday with Stanford playing notably well, while CU’s defensive line limited UCLA’s starting tailback to 57 yards. Winning the battle along the line of scrimmage is not certain for either side at this point and will likely prove decisive.

Can CU’s secondary rebound from a disappointing performance?

While the first half was great, can the secondary for the Buffs make the adjustments necessary to prevent some of the big plays they allowed week one? Similarly, can freshman safety Christian Gonzalez effectively prevent catches without drawing defensive pass interference calls? This will be a test for Defensive Coordinator Tyson Summers with the talented but raw group he has to work with.

Can Colorado’s special teams do better with field goal attempts?

The Buffs saw two different field goals blocked against the Bruins, and the now-retired 33-year-old starter James Stefanou was replaced by sophomore Evan Price (brother of former CU kicker Davis Price) at placekicker. Price performed well, but if the game is on the line and CU needs three points, can the special teams unit and Price covert on a consistent enough level going forward? Or will this be a struggle throughout 2020?

The battle of the coaching minds

Both teams come in with very different coaching situations on each side. The Cardinal have had David Shaw at the helm since 2011 and has been considered one of the best in college football, even being talked about for pro job openings at certain points. Meanwhile, the Buffs are starting over with a surprising hire following the midnight departure of Mel Tucker to Michigan State. Karl Dorrell had not been a head coach since he was let go from UCLA in 2007 and had not coached at CU since the ’90s, but was entrusted by Athletic Director Rick George to lead the Buffs. Dorrell took criticism after replacing the red-hot Noyer with backup QB Tyler Lytle for a drive in the second quarter, but he said that giving Lytle playing time was a part of the gameplan. However, his team looked well-coached and it will be interesting to see how these two match up against each other.