CU to battle UCLA on Saturday in season opener 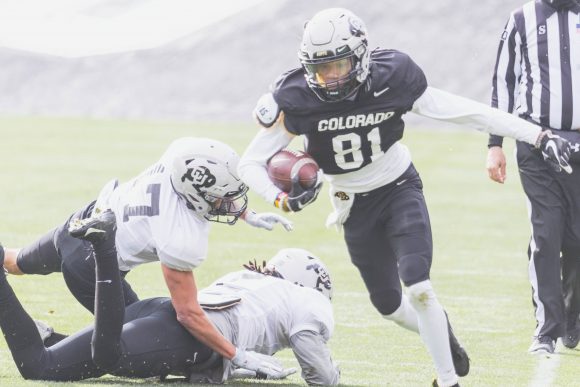 On Saturday, the Colorado Buffaloes will debut at home for the start of the 2020 football season against the UCLA Bruins. Last year, both teams finished with relatively similar records with Colorado at 5-7 and UCLA at 4-8.

In their matchup last season, the Bruins beat the Buffs by 17 points, 31-14. The Bruins offense gave CU trouble with touchdowns coming from tight end Devin Asiasi, wide receiver Ethan Fernea and two from running back Joshua Kelley. Kelley and Asiasi have since been drafted into the NFL. The Bruins have high hopes for junior starting quarterback Dorian Thompson-Robinson who threw for two touchdowns against the Buffs last year and expects to cause problems once again for Colorado’s defense. As for the Buffs, then junior James Stefanou missed a pair of field goals and former quarterback Steven Montez rushed and threw for a touchdown.

Looking to fill Asiasi’s spot is Evidence Njoku, a junior and recent transfer from the University of Miami. As a tight end, Njoku played in eight games for Miami his freshman year. Another player to watch is freshman linebacker Damian Sellers. In high school, Sellers had 23.5 sacks, recovered three fumbles and had 166 tackles over three seasons.

Colorado will have a new head coach this time around in Karl Dorrell, who CU hired in February. Dorrell has had a lot to adjust to during his first few months at the helm from the pandemic with no spring practice and limited summer practice.

This will be a big game for Dorrell as he takes on his alma mater. Not only did Dorrell play football for UCLA, but he led them to five bowl games as a head coach in the mid-2000s. Colorado is not a new place for Dorrell as he was an assistant coach at CU for two stints in the ’90s. It has been seven years since Dorrell coached in the Pac-12, and he feels confident with this year’s team.

“Players are excited,” Dorrell said. “They’re hungry to win (and) they don’t want to be mediocre anymore.”

Some key players to look out for on Saturday are sophomore running back Jarek Broussard who has overcome two ACL surgeries and was out last season. Broussard is set to start on Saturday and had “the most consistency in camp,” according to Dorrell. Unfortunately for CU, junior running back Alex Fontenot, who started 11 games last season, will be out with an injury.

Defensively, Christian Gonzalez will emerge on the scene as a true freshman at cornerback. Dorrell said Gonzalez has been consistent and has great size and speed. Despite a young secondary, CU has two key veterans on defense with senior linebacker and 2019 team-leading tackler Nate Landman and senior defensive tackle Mustafa Johnson.

On Oct. 30, senior Sam Noyer was announced as CU’s starting quarterback. Dorrell expressed confidence in Noyer because of his age and level of maturity. Noyer will be starting his first college game at quarterback after playing four games at safety last year. Noyer believes his offensive line will be key for CU’s success. CU’s O-line brings back three starters from 2019 in senior left guard Kary Kutsch, junior center Colby Pursell and junior left tackle William Sherman.

“I feel like we got a really good group of guys,” Noyer said. “It all starts with our O-line. All those guys have experience and all of them have played and they’ve done a really good job of stepping up this camp and keeping us protected.”

It looks like it will be a good matchup on Saturday in Boulder, even if there can’t be a huge audience.