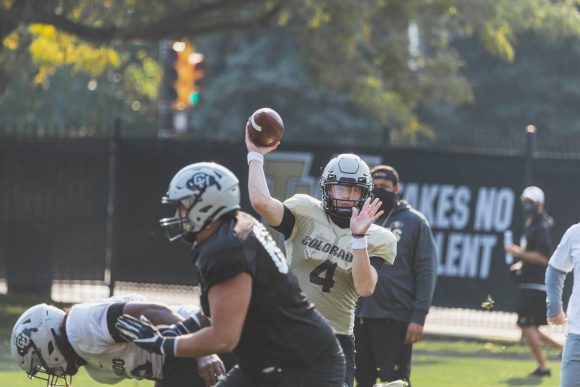 With less than a week before Colorado kicks off its abbreviated 2020 season, the wait is over in the guessing game of who will be the starting signal-caller come Nov. 7. Head coach Karl Dorrell announced after practice on Oct. 30 that senior Sam Noyer has earned the first-string role over junior Tyler Lytle and will start against UCLA on Saturday. After discussions with offensive coordinator Darrin Chiaverini and quarterbacks coach Danny Langsdorf, Dorrell gave Noyer the nod, noting however that it was very close.

“Obviously I was excited,” Noyer said when asked about his emotions after being named the starting quarterback. “When I found out I celebrated for a couple hours and then (went) back to work.”

Given the unique situation with the COVID-19 pandemic shortening the season and severely limiting preseason preparation time, Dorrell said that not having the typical spring and fall practice sessions made choosing between Noyer and Lytle even more difficult.

“We had three weeks to make a decision without any spring practice and you feel like you’re missing a period of time to do a complete evaluation,” Dorrell said. “But the season’s upon us. We play in about a week’s time and Sam (Noyer), we felt that operationally, he is just a little bit better at this point in time.”

The first-year Colorado head coach said that they plan to give Lytle some playing time throughout the season, however, how much has yet to be determined. Dorrell wants both Noyer and Lytle to improve through game experience, which means the upperclassmen quarterback duo will both likely see meaningful playing time.

For Noyer, the emotions have been high because the senior spent last winter in the transfer portal thinking about spending his last year of eligibility elsewhere. In addition, the Beaverton, Oregon native spent last season playing safety under former head coach Mel Tucker. All in all, Noyer’s journey to starting quarterback at CU has been anything but ordinary.

“I did not know I was going to be a Buff again,” Noyer said. “There was a time where I didn’t think this was possible, but (I’m) just glad I made the decision to come back here and things worked out. Now, I got to go prove it.”