“We have a complete team:” CU women’s basketball prepped for season 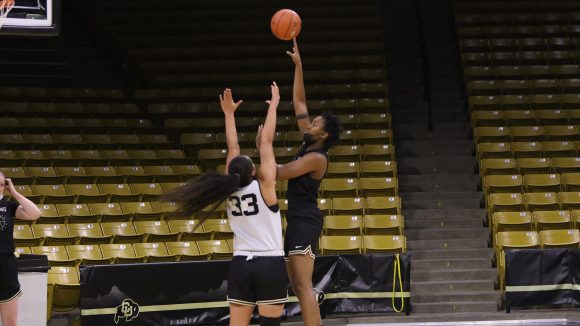 The University of Colorado women’s basketball team is ready to prove it has found the right combination of players this season.

“We have a complete team,” said sophomore guard Jaylyn Sherrod. “I would say we’re not like teams in the past this season. I would say don’t be surprised when things go the way people didn’t think they would.”

Although CU’s schedule hasn’t been announced yet, games can officially begin Nov. 25. The Buffs are playing three non-conference games before beginning Pac-12 play. This season, the Buffs play every team in the Pac-12 twice instead of the usual 18-game schedule that included seeing four of the 11 opponents only once.

“That’s a lot of scouting,” Sherrod joked. “But I think it will be exciting to hone in on the Pac-12”

Colorado won five conference games last year and will have a challenging schedule with five Pac-12 teams being ranked in ESPN’s “Way-Too-Early” Top 25.

The Buffs return with four of its five top scorers in Sherrod, junior guard Aubrey Knight, senior guard/center Mya Hollingshed and junior forward Peanut Tuitele. Colorado will still need to replace 25% of its scoring and rebounding from last season.

“I think this year, probably, is going to be our best year,” said Hollingshed, who led CU last season averaging 13.1 points and 6.9 rebounds. “Everyone can penetrate, shoot, or pass the ball. Being able to have that type of depth on our roster is pretty big for us this year.”

Newcomers to fifth-year head coach JR Payne’s team include Georgetown transfer Tayanna Jones, who will be sitting out this season due to NCAA transfer rules and sophomore guard transfer Madison Buford, who averaged 21.1 points at Rend Lake Community College last season. The Buffs also have a strong mix of international talent with freshman guard Frida Formann of Denmark, sophomore University of Southern California transfer Zuzanna Kulinska of Poland and New Zealender forward Charlotte Whittaker who returns to CU for her sophomore season.

“I think everyone is going to be a good surprise, but I’m really excited to see how Frida (Formann) plays,” Tuitele said. “She’s a very mature player no matter how old she is.”

The Buffs have a history of impressive freshmen with Sherrod earning Pac-12 All-Freshmen honors last year and Tuitele being named an honorable mention All-Freshmen in 2018-19. With five freshmen on the roster, Sherrod can’t see how the tradition won’t continue.

The Buffs have 10 underclassmen, but this doesn’t mean they are inexperienced. Those underclassmen attributed 37.9 of the Buffs’ 64.6 points per game last season and more growth is expected. Part of that growth comes from seeing close games slip away. The Buffs lost seven games last season by less than 10 points, including losing to Stanford in overtime and to UCLA by three points at home. That’s one statistic CU is determined to change.

“I think we learned a lot last year, especially in those close games like the UCLA’s and the Stanford’s,” Sherrod said. “(We) know how it feels to be so close to something and it actually not work out. I think it lights a fire under you and I think that’s what it did with us.”